Midwife Muzhda Malikzada speaks with 22-year-old Soraya and 5-month-old Zainab. The clinic in Parwan province is funded by the Strengthening Health Activities for Rural Poor Project. View a slideshow with more pictures from the clinic.

PARWAN PROVINCE, Afghanistan – Restless kids play peek-a-boo behind their mothers’ blue burqas in the waiting room at Sar-e-Hause Comprehensive Health Centre. Inside the delivery room, a heavily pregnant woman paces back and forth between labor pains. And in a consultation area, a young mother gets breastfeeding advice.

Circulating between all these women is midwife Muzhda Malikzada. Her pace might seem hectic to most, but at least there are no bullets or mortar blasts to dodge anymore, she says. “Life was very dangerous before. We took so many risks to do our work. Now it is much easier and better for everyone.”

It’s been barely a decade since Malikzada was one of just five women allowed by Taliban forces to leave home and work as a midwife in the volatile region around Parwan and Panjshir provinces in Afghanistan, she says.

“Yes, we had fireworks every day,” she recalls with a wry smile. “At that time, people needed our help and someone had to take these risks.”

But now, the Afghan government, World Bank and its partners are working hard to create a proper health care system for the country, says Muzhda. “I feel we are finally on the right path,” she says. “I just pray that we can keep up this progress.”

The government of Afghanistan and Ministry of Public Health are ensuring access to basic health and essential hospital services by having a clear policy and strategy, and implementing it effectively using groundbreaking approaches. They have developed a good working collaboration with partners to ensure adequate financing to deliver a basic package of health services.

This progress is assisted by SHARP, a project supported by the World Bank, Afghanistan Reconstruction Trust Fund (ARTF), Japan Social Development Fund (JSDF) and a multi-donor trust fund. Launched in 2008, the Strengthening Health Activities for the Rural Poor Project is striving to improve the health and nutrition of all Afghans, but particularly women, children, and people in underserved areas.

SHARP finances a basic package of health services in 11 provinces. It also supports stewardship functions of government including monitoring and evaluation of primary health care facilities and hospitals, and other improvements. The project works in tandem and finances the Afghan government’s health sector policy and strategy.

More recently, the World Bank approved a $100 million grant from the International Development Association (IDA) to help the government of Afghanistan expand the scope, quality and coverage of basic health and essential hospital services in Afghanistan. The Afghanistan System Enhancement for Health Action in Transition (SEHAT) Program will cover both rural and urban areas in 22 of the country’s 34 provinces. It will also strengthen the national health system and build the capacity of the Ministry of Public Health to effectively perform its stewardship functions at the central and provincial levels.

Before 2003, medical care was limited and erratic in the country as it struggled with civil strife for almost three decades. Many non-governmental organizations (NGOs) filled the gaps in health services, but efforts were uncoordinated nationwide.

The Sar-e-Hause center currently serves about 18,700 people and is located in the village of Tajikan, not far from the famously fortified Panjshir valley. For years, the area was under steady fire as resistance fighters led by Ahmad Shah Massoud held off the Taliban, Soviets and other attempts at occupation.

Malikzada risked her life to tend to new mothers caught in the conflict. “Of course, it was worth it,” she says today, lifting a wriggling baby from his mother. “How could we refuse these little ones?”

The effective implementation of the government’s health policy has resulted in the number of health clinics growing nationwide from a total of just 496 in 2003 to more than 2,000 today. In Parwan alone, the number of clinics has almost tripled from a total of 24 to 67, says Mohammad Qassim Saidi, the province’s director of health.

“People here had very little access to medical care a decade ago, but the facilities have increased so that there is primary health care for at least 95 per cent of our population in Parwan,” Saidi says.

" People here had very little access to medical care a decade ago, but the facilities have increased so that there is primary health care for at least 95% of our population in Parwan. "

Fall in maternal and child deaths

Recently at the Sar-e-Hause center, nine student midwives gathered to study birth techniques. Among them, Muzhgan Ibrahimkhil, 20, had travelled from the province of Kapisa to learn her trade. Already, after one year of studies, she has assisted with 45 healthy deliveries and is determined to take that track record back home, she says.

“I remember babies dying in my village because of a lack of health care,” says Muzhgan. “This should not happen any more.”

Increasingly, with public education campaigns, more women understand the importance of seeking help from skilled birth attendants. The rate of assisted deliveries had jumped from 24%in 2008 to 34% in 2010, according to the Afghan mortality study.

Shakeba, 30, was giving birth in the delivery room at the Sar-e-Hause center because she had lost another baby during a home birth. “I really like it here,” she says between labor pains. “This is much better. I feel safe now.”

Standing nearby at Malikzada’s desk, 22-year-old Soraya said she also decided to have her baby, Zainab, now 5 months, at the hospital after she and her mother heard through public information campaigns that it was safer. Now, she comes for post-natal checkups and breastfeeding advice.

Down the hall, Ghulam Farooq, the clinic’s chief medical officer, says he became a doctor hoping for such improvements. “There were a lot of problems in this country and I wanted to serve my people, do something positive for them, and now I think this is possible.”

His patient that day, 2-year-old Elham, had travelled with his father, Abdul Basir, and grandfather, Abdul Raziq, 76, to the clinic to seek medical care. The toddler probably had pneumonia, while the grandfather was struggling with prostate difficulties.

“People used to die because of these problems,” Farooq points out. “Now we can treat them properly.” The community is raising funds to complete a planned 20-bed hospital next door to the health center to further improve treatments, he says.

Looking on, 82-year-old Mahboob Shah, a retired teacher and head of the local community development council, says he has watched Farooq grow into a dedicated medical practitioner who truly cares. “Even when he was my student, if you asked him what he wanted for the future, he would say to be a doctor. Now this health program has fulfilled his dream and so many others’ dreams.” 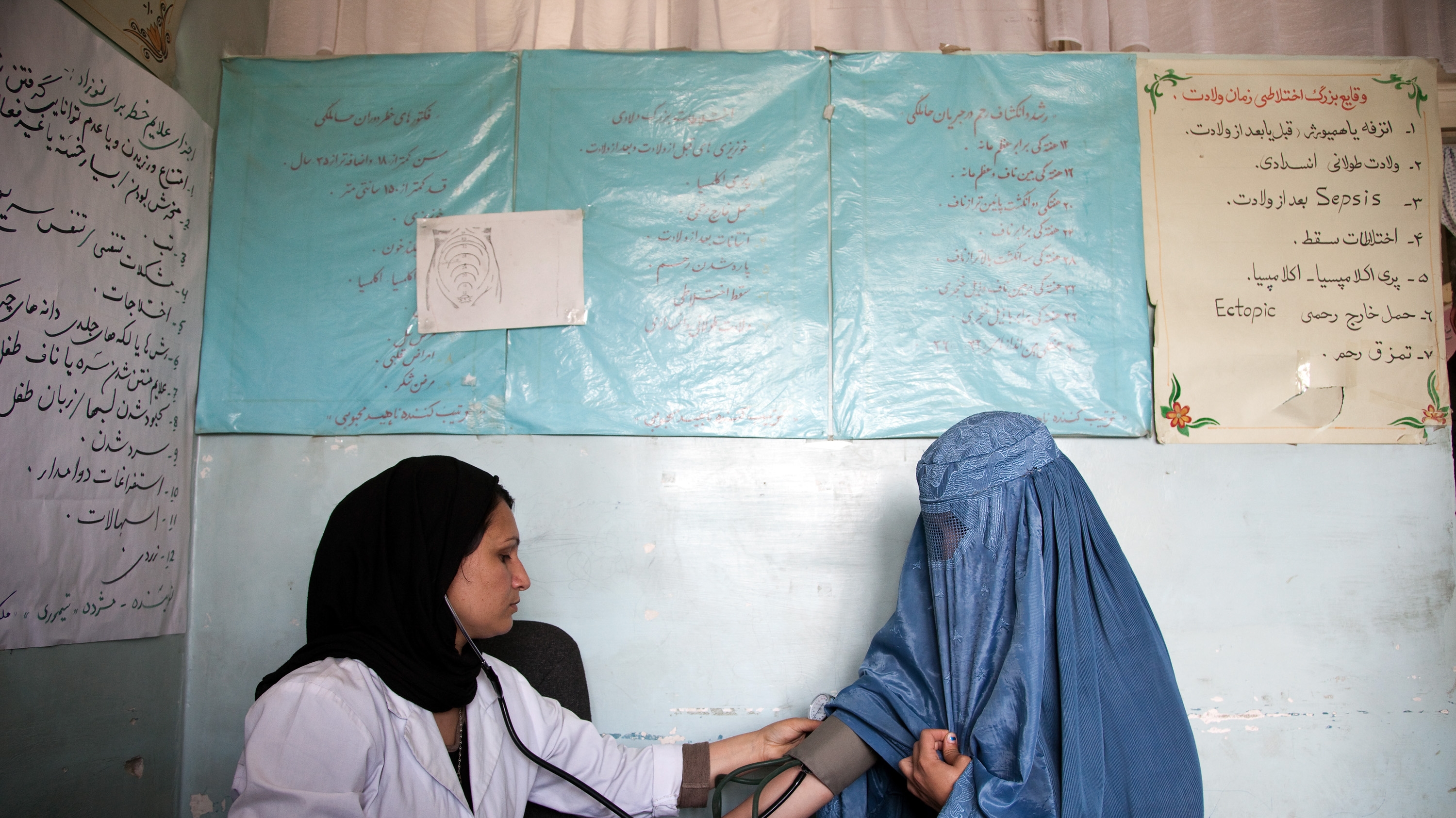