In Mongolia’s capital, air pollution is 6-7 times higher than the most lenient World Health Organization standards.

Gerelchimeg lives in one of the “ger areas” of Ulaanbaatar, Mongolia’s capital. Ger means nomadic tent in Mongolian – former herders who lost their domestic animals to harsh winters or who are looking for better job opportunities brought their gers to the city and settled on the close-in city outskirts, without piped water, sanitation or basic city infrastructure.

Even worse, dwellers of ger areas like Gerelchimeg have to breathe the thick, toxic smog of the city – when breathing, their lungs act like air filters, catching and storing the harmful dust which scientists call “Particulate Matter” (PM). PM that is smaller than 2.5 microns or “PM2.5” can cause severe respiratory illnesses.

A newly-published report by the World Bank presents findings on Ulaanbaatar’s air pollution and its impact on health.  Air pollution was monitored year round in Ulaanbaatar’s ger areas for the first time during the study. The calculated exposure of the population to PM2.5 in the city was found to be, on average throughout the year, 10 times higher than the Mongolian Air Quality Standards and 6-7 times higher than the most lenient World Health Organization targets.

Ulaanbaatar’s air pollution comes from many sources – dust from the desert, unpaved roads and open soil surfaces, lack of vegetation, ash and emissions from coal stoves, power plants, boilers, and vehicles… But coal and wood burning by the 175,000 households in ger areas for cooking and heating contributes to the severity of air pollution in wintertime – summer air pollution is much lower than in winter.

"Today, children are suffering from many unfamiliar illnesses caused by air pollution. As a mother I am very worried about my children’s health and my neighbors’ newborns,” Gerelchimeg says. “I don’t want my children to be sick only because they are living in ger areas.”

While people migrate to the capital to seek a share of the growth the country is undergoing, it also puts the city under environmental stress.

With the support of the World Bank, the Government of Mongolia has mobilized about $45 million in donor assistance. The Bank also approved an additional US$15 million credit for the Ulaanbaatar Clean Air Project, which is implemented by the Ulaanbaatar Municipality.

The study finds that reducing air pollution in Ulaanbaatar will require sustained efforts. To achieve Mongolia Air Quality Standards, particulate emissions would need to be reduced by 94% from ger areas, suspended soils and boilers combined.  But certain measures can have visible impacts – if PM emissions from ger areas are reduced by 80%, the annual average concentrations of PM2.5 and PM10 (slightly larger particles that lodge in the throat and upper respiratory tract) could be reduced by about one quarter.

So, for the short term, the Ulaanbaatar Clean Air Project will help replace stoves and low-pressure boilers used now by ger areas families with new models that are more energy-efficient and burn fuel more cleanly. It will provide subsidies to bring down the costs for these people, who are among the poorest and most vulnerable in the city. This is to continue a program started at a large scale by the United States Millennium Challenge Corporation.

"There is no magic bullet for reducing air pollution,” says Gailius Draugelis, a lead energy specialist at the World Bank, who is leading the organization’s support for air pollution reduction in Ulaanbaatar. “Significant domestic and foreign funds have been raised to support a wide range of solutions. Enlisting the support of the citizens and the local private sector is also very important.”

"Many solutions will require Ulaanbaatar citizens to change technologies and learn how to use them.  The local private sector will need to supply and service these technologies,” he adds.

"Also, at this stage, keeping the momentum and commitment that has been built over the past few years is critical,” he says.

" Today, children are suffering from many unfamiliar illnesses caused by air pollution. As a mother I am very worried about my children’s health and my neighbors’ newborns. I don’t want my children to be sick only because they are living in ger areas.” "

a mother lives in one of the “ger areas” of Ulaanbaatar

Keeping the momentum means taking short-term actions now so that people could suffer less from pollution, while preparing medium and long-term solutions that need more time to take shape. For example, apartments for the poor ger areas dwellers are a long-term solution, Draugelis points out. But who will pay for building these apartments, maintenance fees, electricity, heating, water, sewage, appliances, etc.?  These are questions that need to be answered.

So, in this regard, the Ulaanbaatar Clean Air Project, while supporting cleaner heating appliances over the short term, will also enable the city’s Municipality to explore affordable housing options and to improve the environmental performance and efficiency of the urban district heating system, which supplies apartments with heat and hot water.

"Environmental protection has become one of the most critical tasks for our government,” says Mr. Bat, Manager of Ulaanbaatar city.

"Ulaanbaatar may be the coldest capital in the world but it doesn’t need to be the most polluted too,” says Coralie Gevers, Country Manager for Mongolia, the World Bank. “Improving air quality management in Ulaanbaatar and reducing pollution concentrations would prevent illnesses, save lives and avoid enormous health costs.” 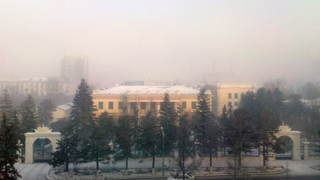