Water Is Central to Sustainable Development

Water is central to all aspects of green growth, from human development to food security, energy, urbanization, and climate change. This holistic vision, embraced by the World Bank, implies support for all sizes of “green” water infrastructure, including large dams, to help countries adapt to climate change and ensure access to water and energy for poor populations.

At the World Water Forum in Marseille, France, March 12-17, World Bank experts and other speakers discussed that vision and the importance of working across sectors and increasing support for basic sanitation globally.

The conversation continues on World Water Day, March 22, with a panel discussion with the founder of Tribal Technologies on new approaches and technologies that have potential large-scale impact and two film screenings, including the new documentary Last Call at the Oasis, which portrays the global water crisis as the most urgent issue facing our world this century.

“From a climate change perspective, and as we move toward green growth, large-scale water infrastructure has an essential role to play,” said Rachel Kyte, the World Bank’s vice president for sustainable development, speaking at a debate on the role of water storage in increasing resilience to climate change.

Kyte explained that every country will have to go through an energy transition and that development partners such as the Bank need to help them find sensible solutions. Professor John Briscoe of Harvard University underlined the need for countries themselves to make decisions about water storage. Gabriel Azevedo of Odebrecht Energy said large dams would definitely be part of the answer in Brazil. Suresh Prabhu, a former minister of power for India, argued that “we cannot have a big population and small solutions.”

The World Bank Group has been stepping up its support for infrastructure since 2007 as a result of client demand and the financial crises. It is currently the largest external source of finance for the water sector, providing US$7.5 billion in fiscal year 2011.

Summing up the debate on water storage, Peggy Hollinger of the Financial Times said, “Everybody seems very excited the World Bank is back.”

New initiatives on water and energy

With the Rio +20 United Nations Conference on Sustainable Development just three months away, green growth was a major topic of discussion in Marseilles. Whether the session was on rural drinking water, new approaches to urban water networks, or food security, the speakers stressed the need to work across sectors to tackle the world’s development challenges.

For the first time, the World Water Forum included a specific set of activities on energy and water, looking at cooling water, water pollution from fuel extraction (such as shale gas), and water consumption for fuel creation (biofuels), as well as hydropower.

“In the past, we could approach problems from just one angle, but now we have to consider the linkages between sectors to remain relevant,” said Jose Luis Irigoyen, the Bank’s director for transport, water, and information and communication technologies. “A new Policy Network on Energy and Water was launched in Marseilles and we look forward to being an active player.”

The Marseilles forum came on the heels of an announcement by UNICEF/WHO that the world has reached the Millennium Development Goal (MDG) target of halving the proportion of people without access to safe drinking water, with 2 billion people gaining access between 1990 and 2010.

However, much remains to be done to ensure that the poor are not left behind. Sub-Saharan Africa’s coverage is still well below that target, and the world will not meet the sanitation MDG target.

Speaking at a session on water and disasters, Maria Mutagamba, Uganda’s minister of water and environment, drew attention to the “silent tsunami” in Africa, where 3,000 children are lost every day due to poor sanitation and hygiene.

Jaehyang So, manager of the Water and Sanitation Program (WSP), said, “There is wide recognition that more funding and knowledge need to go to basic sanitation, which is crucial for both green growth and public health.”

As participants in the World Water Forum noted, countries will have to come up with better ways to manage water assets to prevent running out of water for basic needs in coming years. The Social Change Film Festival and Institute, the World Bank, WSP, and IFC will host Every Drop Counts on World Water Day, March 22, to examine ways of doing just that.

Participant Media is also presenting a special advance screening of Last Call at the Oasis, which portrays the global water crisis as the most urgent issue facing our world this century. 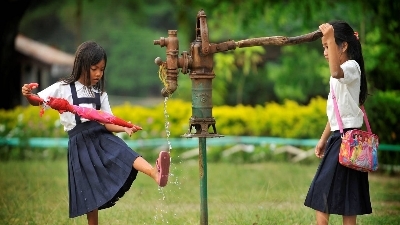