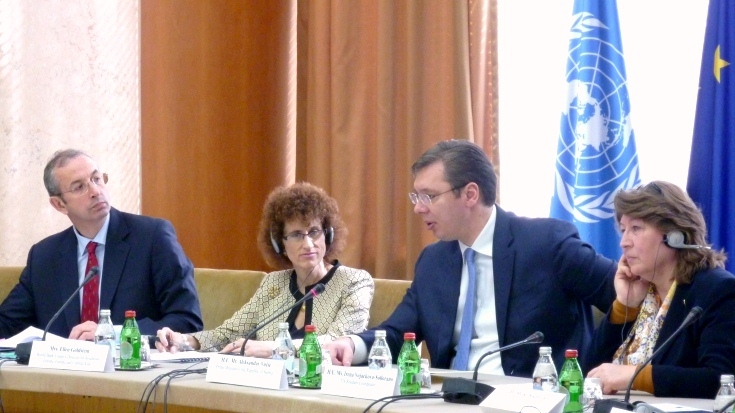 The National Disaster Risk Management Program for Serbia was officially launched on March 4, 2015 by the Prime Minister Aleksandar Vučić at Palata Srbije. This new program builds on the momentum and partnership created between the European Union, the United Nations, the World Bank, and the Government of Serbia during the response to the devastating floods in May 2014, and intends to implement more proactive resilience strategies to protect Serbia’s development paths by reducing the existing risk, avoiding the creation of new risk, and responding more efficiently to disasters.

The EU, the UN, and the World Bank collaborated to support the Government of Serbia to respond to the floods in May 2014, which affected more than 1.6 million people and over 4 percent of its GDP according to the joint post-disaster needs assessment. The donor community also came together to provide urgent assistance for Serbia’s recovery.

According to Ellen Goldstein, Country Director for Southeast Europe, “The establishment of the National Disaster Risk Management Program is an important step forward for Serbia to shift from a reactive approach to addressing emergencies, toward a more proactive and forward-looking approach to managing disasters before they happen.”

It creates a common platform for managing risks associated with various types of disasters by identifying potential hazard risks and reducing them in the long term. The Program also provides an open platform to enable various sectoral actors and donors to coordinate and avoid replication of similar activities. The Program is currently funded by the EU, the UN, Swiss State Secretariat for Economic Affairs, Swiss Agency for Development and Cooperation, Austrian Government, the Global Facility for Disaster Reduction and Recovery, and the World Bank.