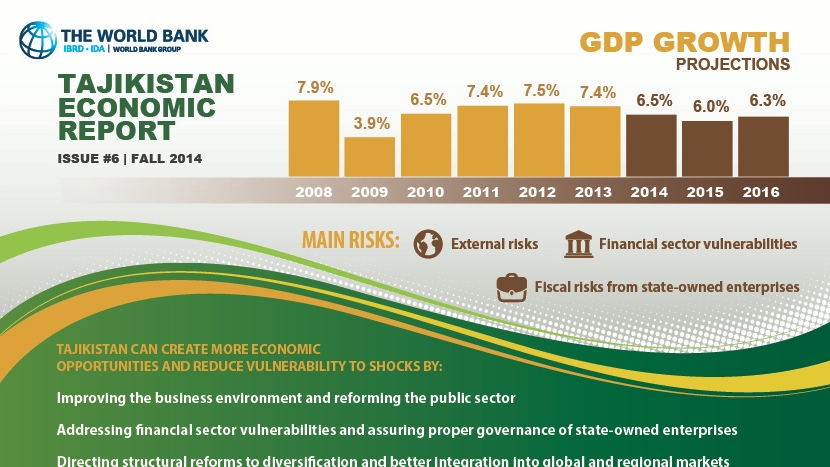 Growth is slowing and vulnerability to shocks is increasing, while Tajikistan faces a range of external and domestic risks including a slowdown in remittances and trading, low-prices for aluminum and cotton, governance issues in the financial sector, and fiscal risks from ill-governed state-owned enterprises.

Tajikistan’s economic growth moderated to 6.7 percent in the first half of 2014, down from 7.5 percent a year earlier, as activity slowed in almost all sectors.

Lower inflows of remittances, due to the slowdown in Russia, have translated into lower domestic demand and slower growth in services and housing construction. Though growth in agricultural output also moderated, due to heavy rains and low temperatures, it was still a healthy 6 percent. Fixed investment grew swiftly as the public investment program got underway.

Inflation began to pick up as food prices rose and tariffs for utilities were adjusted, reaching 4.7 percent for the first half of 2014, compared with 1.6 percent a year earlier.

GDP growth is projected to ease to 6.5 percent in 2014, because of the spillover effect from the slowdown in Russia and in export sales.

Inflation pressures are expected to increase, but stable global food prices should help to keep growth in inflation within a single digit. Despite slower economic growth, the fiscal deficit is projected to remain unchanged in 2014, because of higher than expected revenues from foreign trade, reforms in revenue collection, and spending restraint.

The current account deficit is projected to widen to 3.7 percent of GDP, due largely to sluggish export growth and the slowdown in remittances.

Tajikistan could potentially benefit from the Russian ban on imports of food from the West, but fragile market links, limited economies of scale, poor access to credit, and barriers to entry and expansion limit Tajikistan’s ability to benefit from increased Russian demand.

Both domestic and external risks face the country. The main risks to the near-term outlook relate to serious vulnerabilities and governance issues in the financial sector, fiscal risks from state-owned enterprises (SOEs), a slower recovery in the prices of aluminum and cotton, and a further slowdown in activity in Tajikistan’s main trading partners.

The pace and financing of large infrastructure projects are also highly uncertain. The main transmission channels through which adverse external shocks could impact the Tajikistan economy are remittances (partly because migrants may return) and external trade.

Reinforcing fiscal and external buffers will be critical to mitigating the impact of external shocks, particularly in light of Tajikistan’s strong links with Russia and other important trading partners such as Kazakhstan, Turkey, and China.

In the near-term, prudent macroeconomic policies, such as greater exchange rate flexibility, could help the country absorb any shocks.

A comprehensive structural reform program is needed in order to bolster growth, create jobs, and reduce poverty – especially as risks are intensifying.

Reforms to improve the business-enabling environment need to go hand-in-hand with comprehensive public sector reform. Among the highest priorities are to address financial sector vulnerabilities and assure proper SOE governance to minimize fiscal risks and deliver cost-efficient services to consumers.

Beyond general reforms, specific challenges need to be addressed in many sectors where SOEs operate, such as energy, infrastructure, and delivery of other services. Policies to facilitate absorption of returning migrants into the local labor market will also be important.

Over the medium-term, prudent macroeconomic management and structural reforms directed towards diversification and better integration into global and regional markets could create more economic opportunities and reduce Tajikistan’s vulnerability to shocks.

Investing in human and institutional capital could support productivity improvements and job creation, and ultimately speed up the transition to a more sustainable growth model.