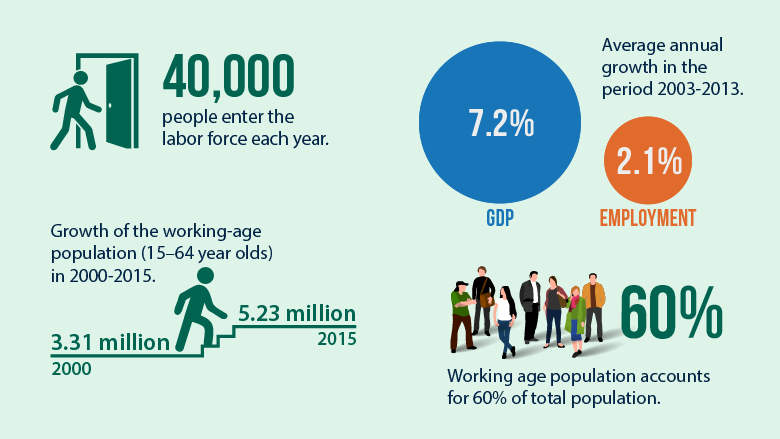 The World Bank’s "Tajikistan Jobs Diagnostic: Strategic Framework for Jobs" presents the main jobs challenges for Tajikistan and outlines a set of policies and programs that could promote creation of more domestic jobs, help improve the quality of existing jobs and facilitate access to jobs.

Tajikistan’s economy is not creating sufficient jobs for its rapidly growing workforce, so its most valuable asset – human capital – is largely underutilized. There is an urgent need to alter the existing growth model to ensure faster job creation and improved job quality.

Between 2003 and 2013, Tajikistan’s GDP grew by an average of 7.2 percent per year, while employment expanded at only 2.1 percent annually. At the same time, the working-age population, defined as 15–64 year olds, rose from 3.31 million in 2000 to 5.23 million in 2015. Only 43 percent of Tajikistan’s total working age population are in the labor force. The majority of those working are in low quality jobs in the informal sector. Moreover, too many jobs in Tajikistan are seasonal or temporary, and their share has increased over time.

Women and youth are the least represented in the labor force. Inactive youth, i.e. those who are neither employed nor in school, represent 40 percent of the total youth population, which is high by international standards. While youth are more likely than adults to work in private sector wage jobs, almost one third of employed young people are in unpaid (informal) jobs, compared to 15 percent of adults.

Women are at a disadvantage in employment, and the trends are not encouraging. In 2013, the female labor force participation rate was just 27 percent compared to 63 percent among males. Employed women are more likely to work in the public sector, but almost a quarter of women are involved in unpaid employment in family businesses compared to 13 percent of men. 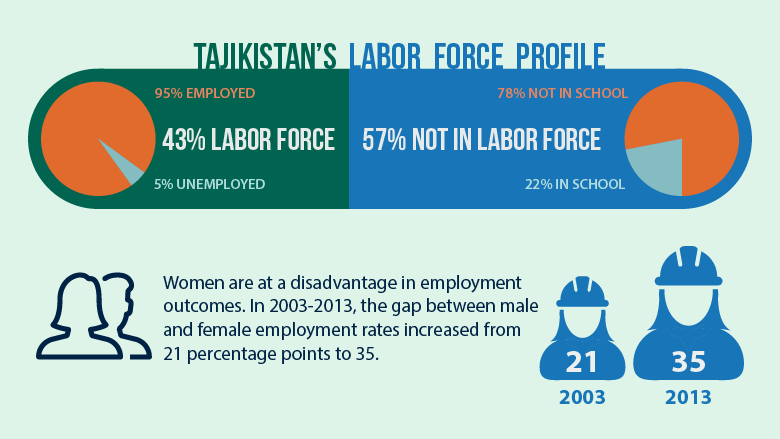 The formal private sector, squeezed by large public and informal sectors, is underdeveloped in Tajikistan. Formal wage employment in the private sector represents just 13 percent of total employment, while the share of potential entrepreneurs who try to start a business is very low at 11.8 percent, pointing to significant barriers to starting, and running, a business. The majority of the existing formal private sector firms are small and young, and they appear to face constraints or disincentives to growth. 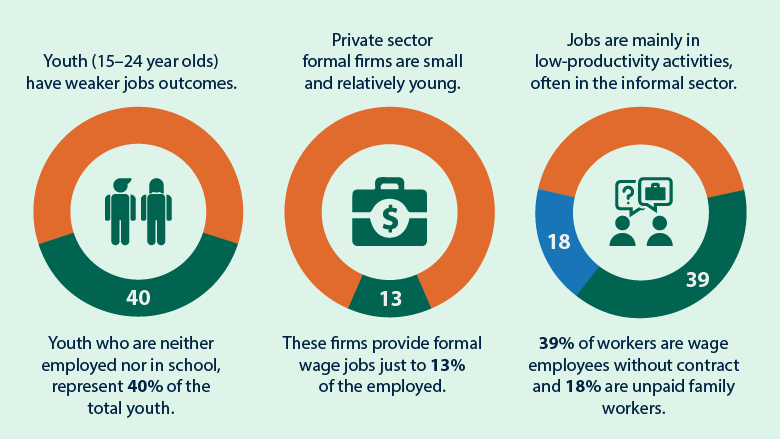 The Tajikistan Jobs Diagnostic: Strategic Framework for Jobs recommends that the Government of Tajikistan rethink the role of jobs in achieving its development objectives, including those set out in the new National Development Strategy to 2030. The Government’s job strategy should aim to i) facilitate the creation of more jobs, particularly in the private formal sector; ii) improve the quality of existing jobs, especially in the informal sector; and iii) facilitate better access to jobs, including transitions from inactivity to employment and from low to higher quality jobs, with a focus on vulnerable workers. In this context, the report makes policy recommendations around three pillars:

Promoting private sector growth: Sustainable job creation relies upon the growth of a competitive private sector. Accordingly, this pillar focuses on the reforms needed to ensure an effective enabling environment that will help entrepreneurs to create new businesses, and current firms to invest, expand, and hire workers.

Connecting people to jobs: This pillar focuses on connecting potential workers to jobs through a set of supply side policies and programs aimed at increasing labor force participation through enabling policies, improving access to jobs through labor market programs, and better leveraging the benefits of migration. 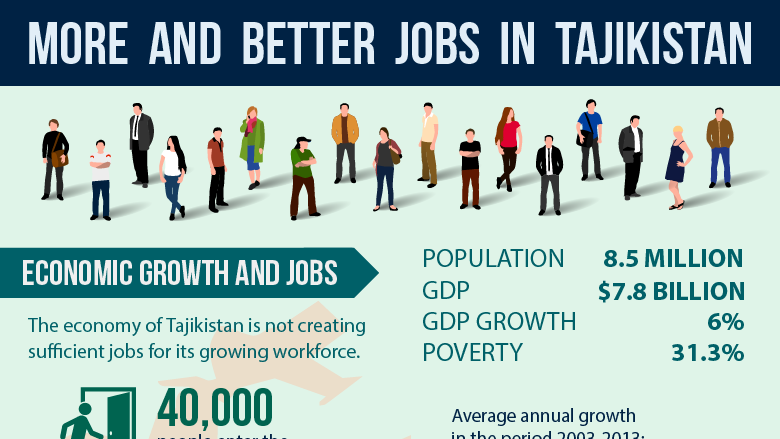