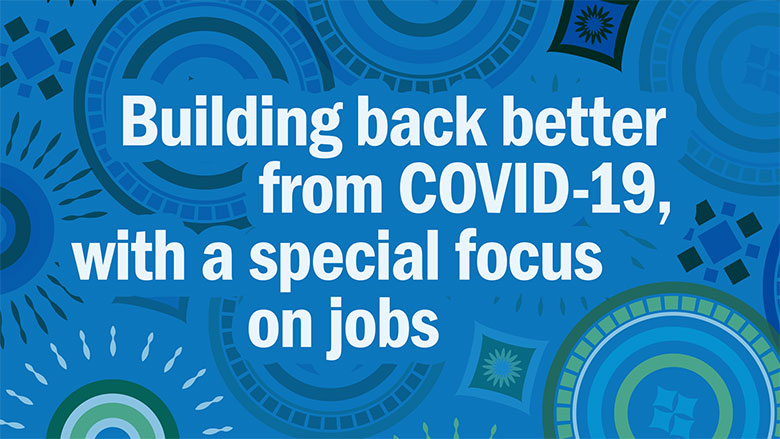 PRETORIA, July 12, 2021 – The thirteenth edition of the South Africa Economic Update, Building back better from COVID-19, with a special focus on jobs, examines how supporting young entrepreneurs could be one of the ways the country could address, unemployment, among its other pressing social challenge in an environment of weakened economic growth.  The Economic Update expects South Africa’s growth to rebound to 4% in 2021, the fastest pace in over a decade, bouncing back from last year’s deep contraction of 7%.  However, medium-term prospects for higher and more inclusive growth remain constrained. Growth is expected to slow down to 2.1% in 2022 and to 1.5% in 2023.

This report reviews the impact of the COVID-19 (coronavirus) on South Africa’s labor market, which has been marked by high levels of unemployment and inactivity, even at the best of times. The report finds that South Africa entered the COVID-19 pandemic with low levels of employment and a decade of weak job creation, far below the standards of most upper middle-income countries. It finds that despite the government’s solid response to the pandemic, jobs have been severely impacted, and recovery is slow.

By the end of 2020, despite two quarters of employment growth, the number of employed people had fallen by nearly 1.5 million, and the wages of workers who still had jobs had fallen by 10 – 15%. At the time of releasing this report, only 40% of employment losses had been recovered.

In addition, the report shows that the COVID-19 pandemic crisis has exposed structural weaknesses in the job market. Young people, in particular face acute unemployment rates, with incidence twice as high as among older age groups. Among 15–24-year-olds, 63% are unemployed and looking for work, whereas among 25–34-year-olds, this rate reaches 41%. When discouraged workers are included, unemployment rates are as high as 74% for 15–24-year-olds and 51% for 25–34-year-olds.

The report suggests that entrepreneurship and self-employment offer the biggest opportunity to create jobs in South Africa, particularly with the increasing number of start-ups, especially in the digital sector, which could become an engine of jobs growth in the future. Cape Town alone, the 'tech capital of Africa', has over 450 tech firms and employs more than 40,000 people. In 2020, a total of $88 million (R1.2 billion) disclosed investments went into its tech start-ups.

“If South Africa were to match the self-employment rate of its peers, it could potentially halve its unemployment rates,” said Wolfgang Fengler, World Bank Program Leader. “In South Africa, self-employment including own-account workers with own businesses, freelancers, only represents 10% of all jobs, compared to around 30% in most upper-middle income economies such as Turkey, Mexico, or Brazil.”

“To generate employment, South Africa would have to address three chronic labor market challenges: extremely high rates of inactivity, high rates of unemployment, and low levels of self-employment,” said Marie Francoise Marie-Nelly World Bank Country Director for South Africa, Botswana, Eswatini, Lesotho and Namibia. “By improving the business climate, the entrepreneurship ecosystem and access to financing, as well as investing in skills, the government can encourage self-employment and support the growth of micro-and small enterprises.”

The report also suggests that South Africa consider policies that target labor market outcomes and that can make a difference in the pace of employment recovery. It offers four sets of interventions that would combine time-bound emergency support for poorer workers with reforms to increase the size of the labor market: