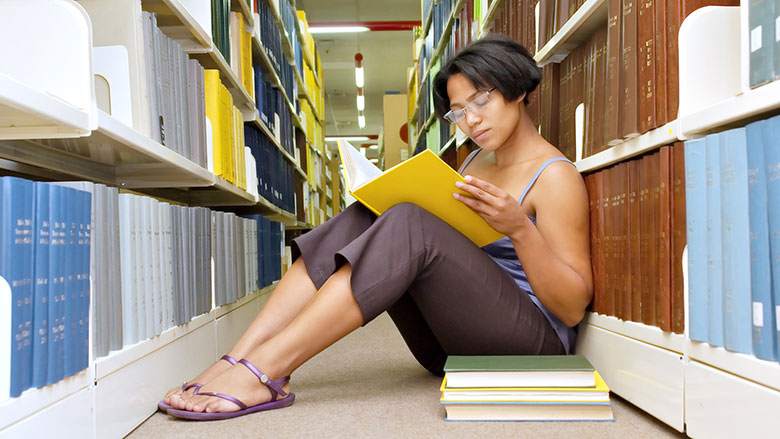 Student reading in the library.

PRETORIA, April 10, 2018 – The number of South Africa’s poor could be reduced by more than half by 2030 through various combined policy interventions that reduce inequality by creating skilled jobs for the poor and ignite growth by increasing competition, policy certainty and promote skilled migration, according to a recently released World Bank report.

Projecting the South African economy through 2030, the 11th edition of the South Africa Economic Update: Focus on Jobs and Inequality, assesses the potential impact of a combination of various policy interventions on jobs, poverty, and inequality. This report presents a scenario in which the number of the poor could be reduced by more half, dropping to 4.1 million by 2030 from 10.5 million in 2017. In addition, the Gini index of inequality would reduce to 56 in 2030 from 63 in 2017 and 800 thousand jobs could be created with the economy increasing at an annual rate of 2.2% as a result of these interventions.

“We see from this report that reducing South Africa’s high inequality will require improving education and spatial integration to provide the poor with skills that are required to meaningfully participate in a capital and skills intensive economy such as South Africa,” said Paul Noumba Um, World Bank Country Director. “This would need to be complemented by policy intervention that spur additional growth and provide the fiscal space to finance these reforms.”

The economic update reviews the evolution and nature of South Africa’s inequality – among the highest in the world– arguing that it has increasingly been driven by labor market developments that demand skills the country’s poor currently lack. It draws from the forthcoming World Bank’s Systematic Country Diagnostic, and the recently-released Poverty and Inequality Assessment.

Without the policy interventions modelled in the economic update, South Africa would on current trajectory not be able to attain its development targets outlined in the country’s National Development Plan of creating sufficient jobs, eradicating poverty and reduce inequality. In the baseline scenario of an average gross domestic production (GDP) growth of 1.4% annually, the number of poor would drop to 8.3 million in 2030 from 10.5 million in 2017. In addition, a modest 215,000 jobs would be created every year, mostly skilled and semi-skilled and the poverty rate would reduce to 12.7% in 2030 from 18.6% in 2017. The Gini coefficient would drop to 59.5 in 2030 from 62.8 in 2017 and the unemployment rate would move slightly from 27.2 in 2017 to reach 26.7% in 2030.

“Despite the slow growth environment that South Africa is currently facing, ongoing improvements in education among poor is slowly paying off as they gain skills and get an increasing share of skilled labor income,” said Sebastien Dessus, World Bank project leader. “As a consequence, we project income inequalities to be lower in 2030 than in 1996.”

The report argues that the gains in improving education would be boosted by increasing teachers’ capacity, accountability and financial support for poor university students. This would raise the number of poor students getting a tertiary degree to 4.6% in 2030, against 2.2% in the baseline scenario.

Furthermore, with respect to reinforcing spatial integration, investing an additional 1% of GDP every year into collective transportation systems and social housing would reduce their price, and accelerate GDP growth through higher labor supply. This would lift an additional 0.5 million people out of poverty. The Gini index of inequality would lower further by 0.7 point with vulnerable households and transient poor being the main beneficiaries.

The report also argues that the impact of these interventions would be diminished in a slow growth environment and put a strain to public finance. Domestic factors such as policy uncertainty, low business and consumer confidence, and supply constraints are noted as having held back growth in South Africa since 2015.

The report suggests that reducing policy uncertainty could increase investment in mining by 25% and further increase GDP level by 3% in 2030. It suggests as well that increased competition could lift up GDP levels by 5% in 2030 and alone create 400 thousand jobs. Lastly, the report reveals that accelerated skilled migration would help relax the skills constraint in the short term and help create more semi-skilled and unskilled jobs. It suggests that each additional skilled migrant conservatively could create 0.5 semi-skilled or unskilled job and that 150 thousand additional skilled migrants would further increase GDP level by 2% in 2030.