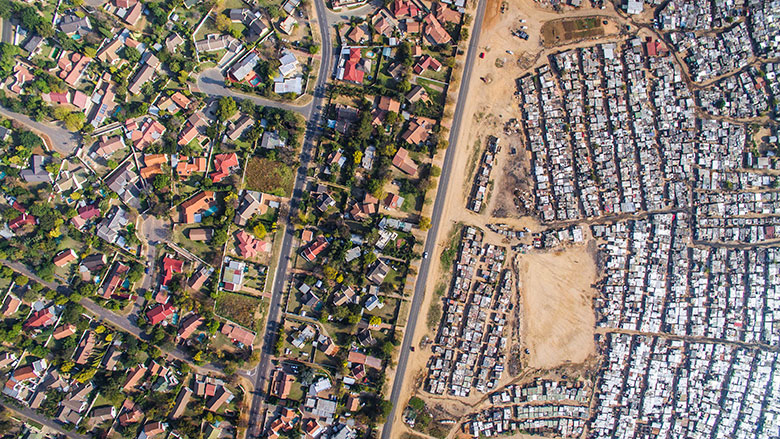 The unequal scenes of the informal settlement of Kya Sands and the leafy trees and swimming pools of the middle-class suburb of Bloubosrand, in Johannesburg, South Africa.

PRETORIA, March 27, 2018 – Accelerating poverty and inequality reduction will require a combination of policies that promote inclusive growth through boosting access to education and skilled jobs creation, according to a recently released report produced jointly by the World Bank, South Africa Department of Planning, Monitoring and Evaluation (DPME) and Statistics South Africa (Stats SA).

The report, Overcoming Poverty and Inequality in South Africa: An assessment of Drivers, Constraints and Opportunities, documents the progress the country has made in dealing with poverty and inequality since the dawn of democracy in 1994. It provides an analysis of the different forms of poverty and inequality drivers and constraints, as well as opportunities presented particularly by the labor market. Where applicable, South Africa is compared to peers in terms of income levels.

“Government has a huge interest in finding effective and sustainable solutions to the problems of poverty and inequality in our country,” Dr. Nkosazana Dlamini-Zuma, minister in the Presidency for Planning, Monitoring and Evaluation, said during the recent report launch.

The report comes at a time where the country is facing the triple challenge of persistently high poverty, inequality and unemployment, despite much progress made by the government in tackling this challenge since 1994. In 2015, 55% of the population South Africans were poor, living below the national upper-bound poverty line of ZAR 992 per person/per month. In addition, with a per capita consumption Gini coefficient of 0.63 in 2015, South Africa is one of the most unequal countries in the world. Furthermore, unemployment reached 27.7% in the third quarter of 2017.

The report finds that although poverty in South Africa has fallen since 1994, it remains high for an upper middle-income country at 18.8% in 2015, when using the international poverty line of $1.90 per day. In contrast, per capita consumption inequality is stubbornly high and has increased since 1994. Not only does South Africa lag its peers on levels of inequality and poverty, the report notes that it also lags peers on the inclusiveness of consumption growth. The consumption expenditure growth of the bottom 40% of the population between 2006 and 2015 was lower than that of the total population and below growth in other middle-income countries.

Use of different dimensions of inequality shows that, by any measure, South Africa is one of the most unequal countries in the world. Wealth inequality is very high in South Africa, even higher than consumption inequality, and has been growing over time, the report shows. The richest top 10%account for 71% share of household wealth, while the bottom 60% account only for 7% of the net wealth, according to the report. Similar statistics for Organisation for Economic Co-operation and Development (OECD) countries suggest that, on average, the top 10% of the wealthiest households own 50% of total wealth, while the bottom 60% own only 13%. Ownership of financial assets features prominently among the factors that influence wealth inequality, the report says, and race and human capital (education) have very high returns for wealth generation, even higher than in the case of income or consumption inequality.

The report also finds that wage inequality is also very high, compounded by heavy polarization between two extremes. South Africa’s obstinately high wage gaps are associated with the skills premiums and differences between unskilled, semi-skilled, and high-skilled workers. The report argues that South Africa has a skills mismatch and a structural unemployment problem with many workers who do not possess the skills employers demand. This has resulted in high demand for high-skilled workers and the subsequent increase in their wages while the wages for semi-skilled workers has stagnated, leading to a tremendous wage polarization and the emergence of a “missing middle” which has contributed to the increase in wage inequality.

According to simulations done in this study, at the current economic growth trajectory of 0.3% in 2016/2017, South Africa will not create sufficient jobs to reach its target outlined in the National Development Plan to eliminate poverty and inequality by 2030. The report calls for interventions that simultaneously stimulate growth and reduce inequalities, arguing that they are likely to have much more impact than interventions that only stimulate growth or only reduce inequalities.

“We see from this report that improving the lives of the poor could be achieved through creating quality jobs and providing better earning opportunities through developing skills and raising labor productivity,” said Paul Noumba Um, World Bank Country Director for South Africa. “As the World Bank we stand ready to support South Africa in its efforts to tackle the triple challenge of high poverty, high inequality, and high unemployment.”

The report also shows that the nature of drivers of poverty and inequality has changed over time with the role of skills and labor market factors growing in importance while the role of gender and race, though still important, having declined. Labor market incomes were an important source of poverty reduction between 2006 and 2015 with 58.3% of the poverty falling due to the labor income increase. Furthermore, the report notes an improvement in skills and education were instrumental for poverty reduction in South Africa, although returns to education, especially to the semi-skilled occupations, have been decreasing in recent years.