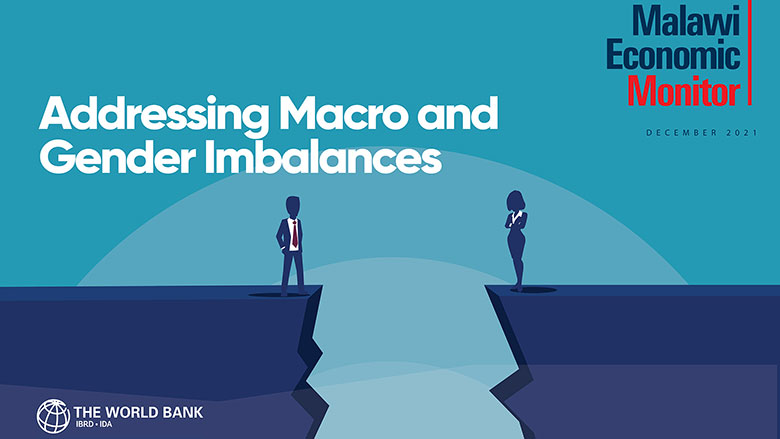 LILONGWE, December 20, 2021— Malawi is lagging across several indicators related to women’s economic opportunities although the country has one of the highest labor force participation rates, according to the latest edition of the Malawi Economic Monitor: Addressing Macro and Gender Imbalances. Overall, women’s capacity to access services and accumulate human capital endowments is below that of men.

Around 59% of employed women and 44% of employed men were working in agriculture, which is the largest employment sector in Malawi. However, large gender productivity gaps remain. Plots managed by men produce an average of 25% higher yields than plots managed by women. The gender gap in agricultural productivity is due to women having unequal use of land inputs, lower access to farm labor, inferior access to improved agricultural inputs and technology, and lower participation in the cash crop/export crop value chains.

According to the 2021 World Economic Forum Gender Gap Report, women in Malawi continue to be disadvantaged across several areas of economic participation. The country ranks 111 out of 151 countries in the Economic Participation and Opportunity index, lagging many other countries in Sub-Saharan Africa.

The gender gaps also exist in the education sector. The gender parity ratio in Malawi is at 84% for secondary enrollment. In 2021, nearly 40% of all students selected into public universities and colleges were women compared to 60% men.

Esther Phiri, 28, studied engineering and now works at Lilongwe Water Board. She says that women still face challenges to access education, let alone higher education, which is key to breaking the cycle of poverty among many families. Training courses such as engineering are often perceived to be hard for women and many girls prefer studying the arts.

The struggle for women does not end after completing their education, because some people still hold the perception that they are not capable of delivering the task at hand when they are fully employed.

Nearly half of the girls in Malawi are married and drop out of school by their 18th birthday. Low levels of educational attainment and high levels of child marriage in Malawi are associated with decreased levels of human capital accumulation, which affects women’s school-to-work transition, and hampers their capacity to participate in the workforce.

“Role models are a great inspiration, especially in the fields that are perceived to be hard for women and mostly dominated by men," said Phiri.

Promoting gender equality is a central development agenda in Malawi, but persistent gender gaps across several economic dimensions is slowing progress towards this goal.

Estimates suggest that closing the gender gap in agricultural productivity alone could lift more than 238,000 people out of poverty and increase the country’s total GDP by 1.85%.

To increase women’s economic empowerment, the report notes that a holistic approach is required, by focusing on the following: