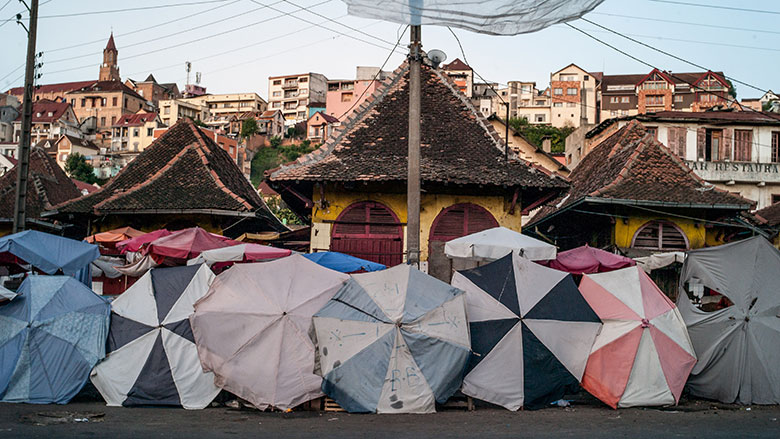 The latest Madagascar Economic Update: Setting a Course for Recovery, revealed that  vulnerable populations, particularly those living in urban areas, were the most affected by job losses in key manufacturing service sectors and the loss of income caused by the sudden contraction in activity. Rural households were impacted as well, the report notes, but resilient agricultural productivity helped reduce the impact.

The pandemic also depleted the availability of fiscal resources for priority investments and social programs, the report says, and the crisis could exacerbate prior constraints to higher and more inclusive growth. Building back better and stronger will largely depend on the government’s ability to mobilize additional domestic resources for priority investments in human capital and infrastructure, the report says, as well as implement far-reaching reforms to stimulate private investment and job creation, leapfrog the digitalization of the economy, and boost agricultural productivity and food security.

“In the absence of ambitious reforms, this crisis risks exacerbating inadequate human capital, a high prevalence of informality and self-subsistence agriculture, insufficient and poorly maintained infrastructures, and governance and institutional weaknesses,” said Marie-Chantal Uwanyiligira, World Bank Country Manager for Madagascar. “A new reform momentum is key to building back better and stronger after the crisis.”

How extensive are the impacts of COVID-19 on Madagascar’s economy?

The combined impact of global trade disruptions and domestic containment measures is estimated to have resulted in a GDP contraction of 4.2% in 2020, similar to that observed during the devastating 2009 political crisis. 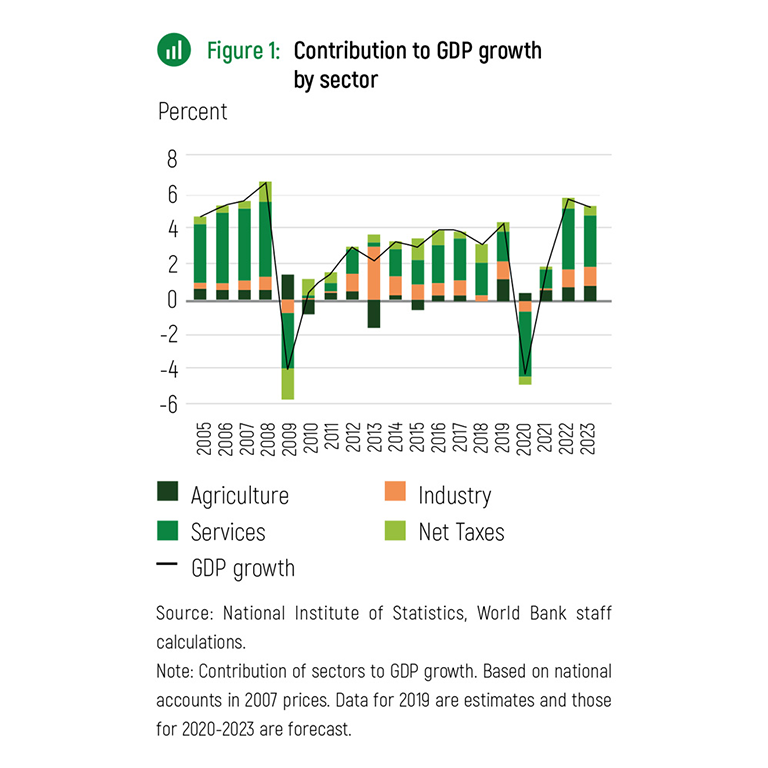 Global trade and travel disruptions had a severe impact on previously high-performing sectors in Madagascar. This was reflected in a sharp contraction in export revenues, particularly from textiles, mining, and tourism, which were key sources of growth and job creation prior to the crisis.

The impact of a sudden stop in activity has been far-reaching. On average, 97% of surveyed companies reported a decline in the demand for their products and services in the first semester while 64.4%of households reported a loss of revenue since the start of the crisis.

Extreme poverty is predicted to increase significantly in 2020, with vulnerable populations in urban areas particularly affected. Job losses in key manufacturing and service sectors, as well as the sudden loss of income for informal workers affected by lockdowns in major cities contributed to pushing a large number of people into extreme poverty this year. The poverty rate (at $1.9/day) is estimated to rise to 77.4% in 2020, up from 74.3% in 2019, corresponding to an increase of 1.38 million people in one year. Rural households were impacted as well, but resilient agricultural output helped reduce the blow.

Macroeconomic and financial stability has been maintained through difficult times

The sudden loss of fiscal revenues and crisis related spending widened the budget deficit to 5.2% of GDP in 2020. Public debt is estimated to have increased to 45.1%, from 37.4% a year earlier, but remains well below regional peers. The sudden drop in export revenues led the current account deficit to increase to 4% of GDP in 2020, but currency pressures have been manageable, and inflation was moderate, at 4.3%. Banks solvency remained generally sound despite rising credit defaults. 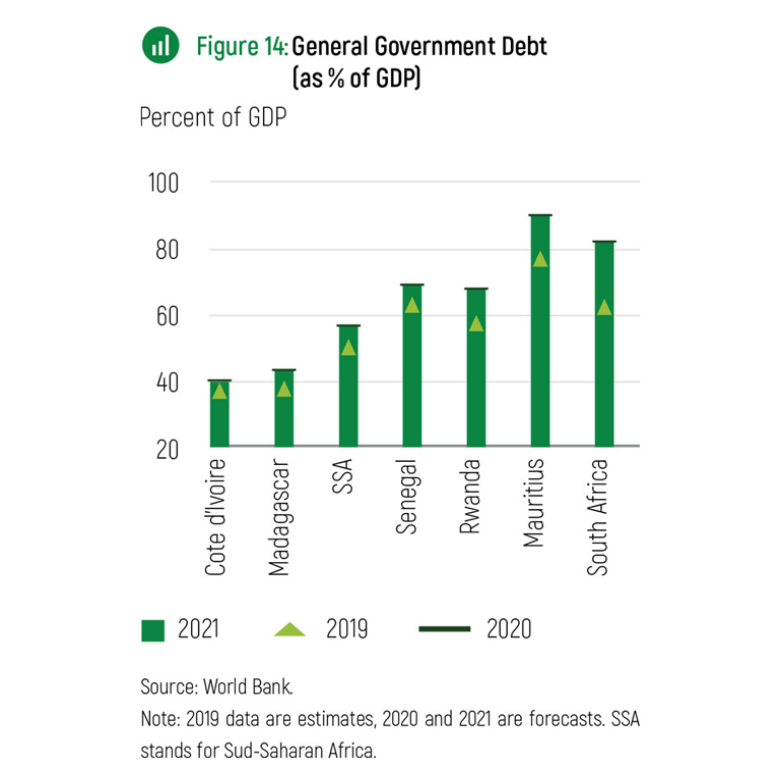 When will Madagascar recoup the losses occurred during the recession?

Growth in Madagascar will recover in 2021-23, but at a gradual pace and will continue to face underlying constraints.

As the crisis continues to cast a long shadow on domestic and global economic prospects, growth is expected to remain subdued in Madagascar in 2021, at around 2%, before bouncing back to 5.8% in 2022 and 5.4% in 2023. Growth remains structurally constrained by inadequate human capital, a high prevalence of informality and self-subsistence agriculture, insufficient and poorly maintained infrastructures, and governance and institutional weaknesses. These constraints risk being exacerbated by the crisis.

The poverty rate should resume its downward trend over the medium term, but vulnerable populations remain highly susceptible to shocks.

A gradual economic recovery should allow poverty rates to return to a declining trend from 2022 onwards, but the crisis is expected to have set back the country’s efforts in alleviating extreme poverty by a decade and maintain it among the poorest countries in Sub-Saharan Africa. Over the medium term, the pace of poverty reduction will largely depend on the country’s ability to improve agricultural productivity, facilitate formal job creation in off-farm employment, and increase resilience to climate and other economic shocks. 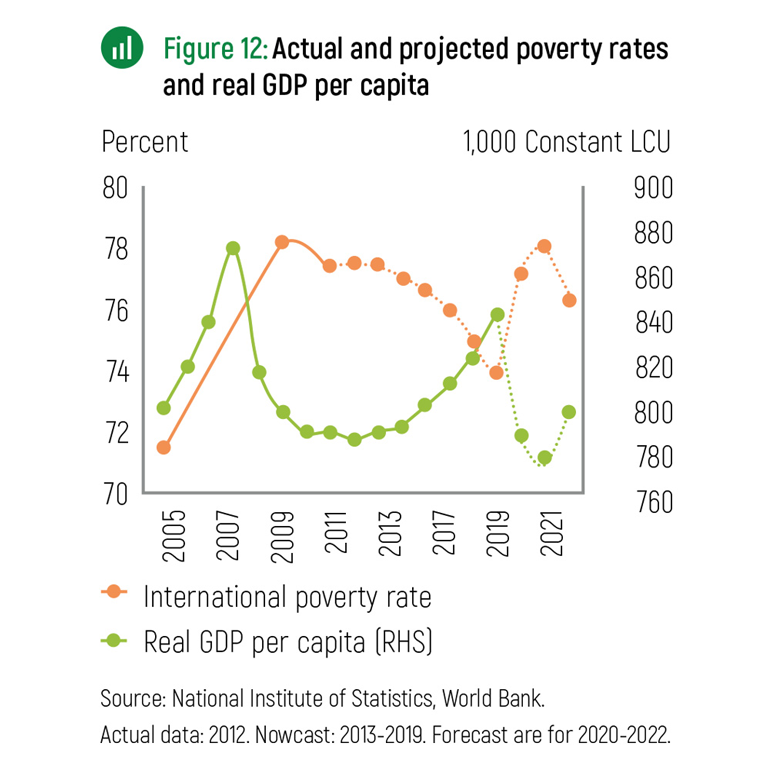 How Madagascar can build back better and stronger after the crisis?

Additional health measures will be needed to prevent a second wave of the pandemic in Madagascar including mass testing and contact tracing and preparatory work for a vaccination campaign. If the crisis lingers, social safety net programs should also be expanded to increase coverage, and should be given a transparent and predictable budget allocation by the State to ensure their sustainability.

Building Back Better for a Sustained Economic Recovery is key

A strategy to drive a strong and durable recovery will need to be based on an ambitious reforms strategy aimed at boosting market access and contestability, leapfrogging the digitalization of the economy, reinforcing the quality of public investments in infrastructure and human capital, and stimulating agricultural productivity and food security. The mobilization of additional domestic resources has become vital to support those priorities, requiring tax broad ranging tax reforms, including the removal of ineffective tax exemptions and the optimization mining taxation. 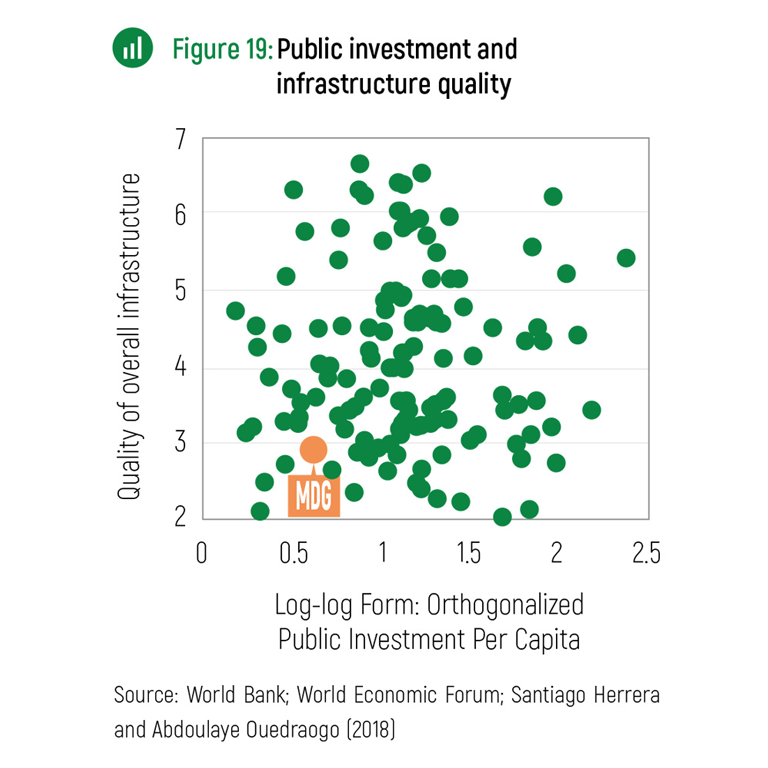