February 13, 2017
World Bank Group
If you are a young woman in Kosovo, chances are you do not have a job, even if you want one. Job prospects for young Kosovars, especially young women, are poor. Only 1 out of every 8 women is formally employed, compared to 2 out of every 5 men. This asymmetry is even more pronounced in rural areas, where the combination of a lack of market-oriented skills, poorly developed infrastructure, and limited child- and eldercare institutions have amplified a generally unsupportive culture, creating disincentives for women to work. The Women in Online Work (WoW) pilot is looking to change this by exploring the suitability of online work for young Kosovar women around the country.

The way organizations around the world hire talent is being revolutionized. In today’s global digital economy, many employers are recruiting talent through online outsourcing, relying on online work platforms to match them with a pool of global talent. The process of finding a job, performing a job, and being paid for a job often all occur online. This presents a “win-win” for both parties: employers significantly save on transaction costs by outsourcing tasks online in return for quality services, while workers get payed - often at a more competitive rate than what they would receive in their local markets.

To test the feasibility of online freelance outsourcing as a possible solution to un- and underemployment among females, Kosovo’s Ministry of Economic Development (MED) requested the World Bank’s support in designing and implementing a pilot activity. The World Bank’s ICT and Jobs team proposed the Women in Online Work (WoW) pilot to explore the suitability of online work for young Kosovar women, a population with the poorest job prospects. The Korea Green Growth Trust Fund provided funding. 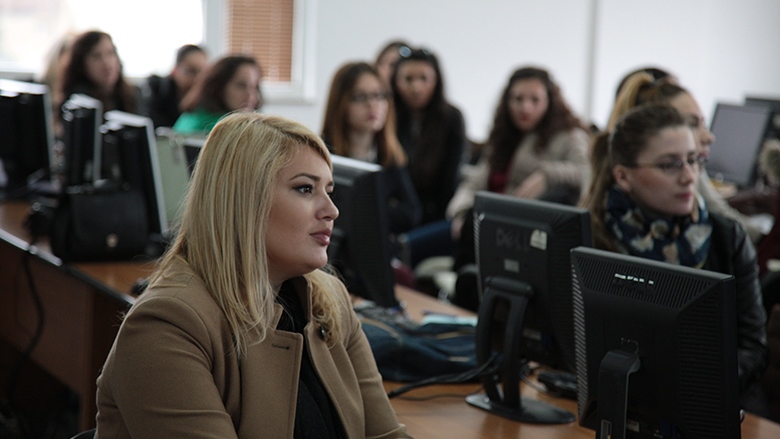 The pilot concept, officially presented in October 2015, benefited from insights provided by the Ministry of Economic Development's Women in ICT Advisory Group. The Enhancing Youth Employment (EYE) Project became a member of the Advisory Group and then joined in the initiative as a strategic partner under a special Memorandum of Understanding with the World Bank in February 2016. The EYE project has been acting on behalf of the Swiss Development Cooperation, Helvetas Swiss Intercooperation Kosovo (HSIK) and Management Development Associates (MDA).

The two-phase WoW pilot covered five municipalities and aimed to train un- and underemployed young women in skills demanded by the ever-growing online freelancing market. The first phase – which ran from February through August 2016 – focused on front-end web development, while the second – from September through December 2016 – had three learning tracks: coding, graphic design, and digital marketing.

In addition to technical-skill components, both phases had a strong soft skills component, with beneficiaries working with career counselors and participating in networking events to build presentation skills, business communications, and basic management skills. In parallel to the training, beneficiaries were introduced to online job bidding and actual online work, with guidance provided by CodersTrust, an implementing partner.

WoW demonstrated that online work was a viable option for helping young Kosovar women build skills and find gainful employment. After two phases, a total of 78 program graduates collectively earned close to $25,000 from jobs obtained online. Some started their own ventures or found jobs in the local IT market.

Started as a mere experiment, this pilot proved that online work has the potential to offer huge opportunities for Kosovo, a small, landlocked country a very young and tech savvy population. It also has the potential to provide new avenues for job creation even in the most remote and rural areas and can foster inclusion of the marginalized and long-term unemployed into the labor force.