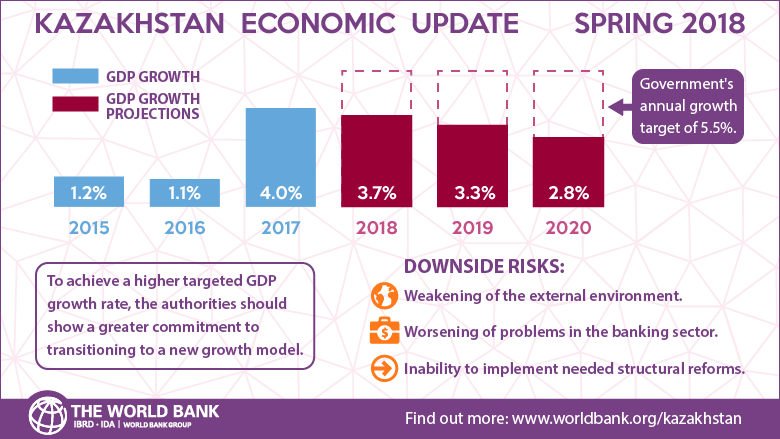 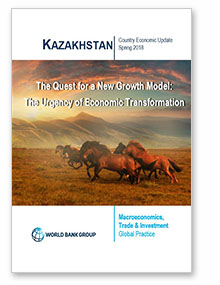 The spring 2018 edition of the biannual Kazakhstan Economic Update outlines the economic situation in the country, as well as the medium-term development prospects.

The Quest for a New Growth Model: The Urgency of Economic Transformation — Download full text (PDF)

A Recovery in the Oil Sector Boosted Recent Economic Performance

Real GDP growth accelerated from an annual average of slightly above 1 percent in 2015–16 to about 4 percent in 2017; this momentum carried through to the first quarter of 2018 when GDP expanded by an estimated 4.1 percent.

The improvement in economic performance was mainly the result of an improved performance by the oil sector, as oil output was boosted from oil fields not included in OPEC-led cuts. Together with more favorable terms of trade, this generated positive spillover effects to the non-oil manufacturing and services sectors.

On the demand side, an improvement in net exports was a key contributor to the higher rate of GDP growth. This resulted in an improvement in the current account balance and more fiscal revenue flowing to the Oil Fund.

The Oil Boost Has Strengthened Macroeconomic Outlook, but Downside Risks to the Current Growth Model Remain

The World Bank’s real GDP growth forecast for 2018 has been revised upward, from 2.6 percent (in the previous Fall 2017 Economic Update) to 3.7 percent, due to better-than-expected oil prices and output.

Over the medium-term, the real GDP growth rate is expected to hover around 3 percent, as the contribution of the oil sector to economic growth declines relative to 2017–18 (when a structural shift in oil output occurred).

With oil prices projected to reach US$ 65/bbl on average in 2018–20, the current account balance is also projected to improve, from deficits in 2015–17 to surpluses in 2018–20. The fiscal position will improve gradually in the wake of fiscal consolidation efforts.

Downside risks to the outlook include a potential weakening of the external environment (driven by mounting geopolitical tensions), a worsening of problems in the banking sector, and the government’s inability to implement needed structural reforms.

The successful implementation of structural reforms will be required to deliver more sustainable and inclusive economic growth going forward.

Ongoing structural and institutional reforms should aim to transform the current oil-driven and state-run growth model—by reducing the role of the state in the economy—to one that facilitates the development of a vibrant, modern and innovative tradable non-oil sector.

In this context, efforts to restructure and privatize state-owned enterprises would be expected to focus on improving the efficiency of public administration, reducing fiscal risks, and opening competitive spaces for the private sector.

Prudent fiscal and monetary policies would support economic and price stability and encourage investment in the non-oil economy. Attracting and retaining more export-oriented and efficiency-seeking investment would be critical for economic transformation.

Special Focus: The Strategy for Investment Attraction and Retention

Kazakhstan is an attractive investment destination for foreign direct investment (FDI) projects seeking to access the country’s rich natural resource base. However, a more export-oriented, efficiency-seeking type of investment is required to enable an economic upgrade and diversification of production capabilities.

Like some of its immediate competitors, Kazakhstan’s FDI performance has shown signs of a recovery since 2016, yet the inflow of FDI is below the average for transition economies, and the share of efficiency-seeking FDI in Kazakhstan remains low.

Analysis shows that reinvested earnings constitute an unusually low share of gross FDI inflows in Kazakhstan. To attract more efficiency-seeking FDI, a concentrated effort to articulate Kazakhstan’s competitive advantages for export-oriented investment is needed, and will also require renewed and strengthened efforts to unlock more reinvestments from Kazakhstan’s existing base of investors.

For an extractive economy, a high share of the public-sector in the economy is not surprising. However, in Kazakhstan it covers almost all sectors of the economy – the assets are valued at 30–40 percent of GDP. The extent to which private ownership of major assets attracts efficiency-seeking FDI will be one of the principal measures of success of the large-scale privatization underway in Kazakhstan.

Kazakhstan's new investment strategy has prioritized reforms to increase the attractiveness of the country for all types of investment, focusing on implementing actions under three main pillars: (i) investment climate reforms; (ii) investment promotion and positioning in international markets; and (iii) privatization and public-private partnerships.

Kazakhstan Economic Update, Spring 2018 – The Quest for a New Growth Model: The Urgency of Economic Transformation