Kazakhstan – The Challenge of Economic Diversification Amidst Productivity Stagnation 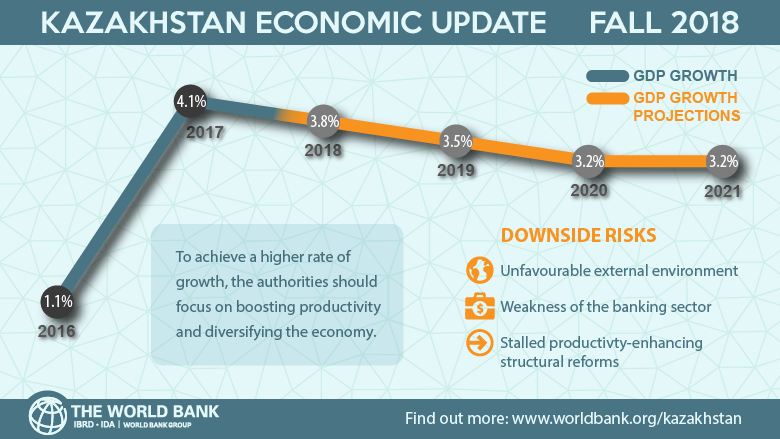 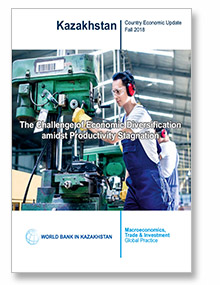 The fall 2018 edition of the biannual Kazakhstan Economic Update outlines the economic situation in the country, as well as the medium-term development prospects.

Supported by robust oil production, the economy expanded at an annual rate of 4.1% in the first half of 2018, down slightly from a growth rate of 4.3% for the same period in 2017.

Oil output rose by 6.2% year-on-year in the first half of 2018, supported by stronger-than-expected production from the Kashagan oil field. However, expansion was below that posted for the same period in 2017 (9.7%).

The services sector also contributed to growth, benefiting from spillovers from favorable terms of trade. Although output from the agriculture sector rose by 4%, construction sector activity remained flat.

Externally, the country saw much improvement in the first half of 2018, reflecting higher growth in oil exports due to favorable terms of trade and a modest recovery in imports.

In the absence of external shocks, inflation continued to moderate. Annual consumer price inflation fell to 6.1% in September 2018 (from 7.1% for the same month in 2017), within the central bank’s inflation target range of 5-7%.

Despite some moderation in inflationary pressures, however, in October the monetary authority increased its base rate by 25 basis points (to 9.25%), after keeping it at 9% for three consecutive months.

The growth projection for 2018 has been revised slightly upward, from 3.7% to 3.8%. This reflects a better-than-expected oil sector performance in 2018.

Growth in the non-oil economy will gradually accelerate as favorable conditions persist in key trading partners, as well as the impact of reforms to improve the business environment and reduce the state’s role in the economy materialize.

As oil output growth stabilizes from 2018 onward, real GDP growth will stabilize at an annual average rate of 3% over the medium term.

The Kazakh authorities have initiated a series of reforms—including civil service reforms, fiscal decentralization, judicial modernization and measures to improve the business environment—in an attempt to address key structural weaknesses.

While various reform initiatives allowed the country to reach 28th position in the World Bank’s latest Doing Business report, there are structural constraints, including state predominance through state-owned-enterprises, that limit the potential for higher productivity and economic growth.

After experiencing exceptional economic growth in the 2000s, Kazakhstan’s economy has slowed sharply since the global financial crisis, due to a fall in productivity growth. The contribution of productivity to growth fell from 6% in the early 2000s to less than 2%, on average, by the early 2010s, and eventually turned negative, falling by 2-3 percentage points between 2014 and 2016.

Kazakhstan has not moved toward new, higher-value products. In fact, its economic complexity, as measured by the Economic Complexity Index, fell between 2009 and 201, both in absolute and relative terms.

The private sector is significantly constrained and does not exhibit many of the important features of a healthy private sector. Empirical evidence suggests that business entry rates are relatively low in Kazakhstan (even lower than in most oil economies).

Spurring productivity calls for economic diversification – less reliance on oil – and removal of fundamental constraints to private sector development. The policy imperatives include: (i) leveling the playing field for all firms—well connected or otherwise, (ii) strengthening the rule of law and dealing more aggressively and comprehensively with corruption, and (iii) introducing structural changes in the economy to boost private investment and reduce the disproportionately large role of the state in the economy.

Press Release: Kazakhstan Must Rise to Challenge of Diversification, as Productivity Stagnates (November 29, 2018)