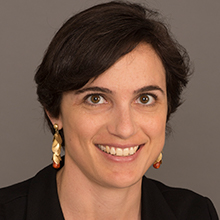 Valeria Perotti is the Program Manager of the Business Enabling Environment unit. She joined the team in December 2019, after holding several positions within the World Bank. As a Senior Economist with the Enterprise Surveys team, she led the implementation of the survey in several countries in East Asia and the Pacific, Europe and Central Asia, and she analyzed firm-level productivity in conjunction with skills and training issues. Valeria also worked in the former Human Development Network of the World Bank, where she managed the Russia Trust Fund survey to develop methods for measuring financial capability. Before joining the World Bank in 2010, Valeria worked on the design and analysis of labor force surveys at ISFOL in Italy. She holds a PhD in Econometrics and Empirical Economics from Tor Vergata University in Rome, and her research has focused on firm productivity, skills, labor market regulations, informality, life expectancy and applied microeconometrics. She speaks Italian.