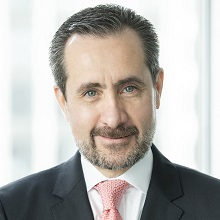 Jorge Familiar, a Mexican national, is Vice President and Treasurer of the World Bank. He also serves as the Pension Finance Administrator of the World Bank Group. He assumed these roles on January 1, 2022. Prior to this appointment, Mr. Familiar has served in multiple senior management roles across different functions within and outside the World Bank, gaining extensive experience in the areas of economic development, finance, and corporate governance.

As Vice President and Treasurer of the World Bank, Mr. Familiar is responsible for the capital markets operations and oversees annual funding programs for a total of around US$60 to 70 billion through bonds issued by IBRD and IDA. He leads a global team of capital markets professionals in the prudent management of US$290 billion in debt portfolios; US$195 billion in asset portfolios managed for institutions in the World Bank Group (WBG) and over 70 clients; and US$600 billion in transactions for hedging and risk management. He also leads the World Bank Treasury’s capacity building, advisory and capital market intermediation services in financial analytics, asset management, and financial solutions for its clients.

As the Pension Finance Administrator of the World Bank Group, Mr. Familiar supervises the investment and administration of the WBG pension plans—with almost US$40 billion assets under management invested in a diverse pool of asset classes including fixed income, public and private equities, real estate and alternatives.

From 2010 through 2021, Mr. Familiar served in the following roles within the WBG:

-Vice President for Finance and WBG Controller, where he had an oversight role for financial operations, financial reporting, and internal control framework for the WBG institutions, and their extensive Trust Fund portfolios.

-Vice President of the World Bank for Latin America and the Caribbean Region where, as the first Latin American to lead the region in over 30 years, he was responsible for the World Bank’s engagement and operations with 31 countries, managing a portfolio of active projects of more than US$30 billion, and focused on supporting the productivity and human capital agendas, and the protection of the excluded and most vulnerable populations.

-Vice President and Corporate Secretary of the WBG, where he ensured the integrity of the governance framework of the WBG institutions.

Between 2008 and 2010, he devoted his efforts to financial inclusion serving as Chief Executive Officer of Mexico’s Instituto FONACOT, a public financial institution with more than one million clients. He provided strategic leadership to the institution and helped restore it to profitability during the global financial crisis.

Mr. Familiar holds a bachelor’s degree in accounting and a master’s degree in finance from the Instituto Tecnológico Autónomo de México (ITAM), where he graduated with honors. He started his career at the National Banking and Securities Commission of Mexico (CNBV, in Spanish), where, having held several positions, he became Vice-chairman of Securities and Derivatives Markets Supervision and served as a member of the Governing Board of the institution. He led the design, negotiation and implementation of several regulatory instruments such as the Securities Market Law, issued by Congress in 2005, as well as the Investment Fund Law issued by Congress in 2001.