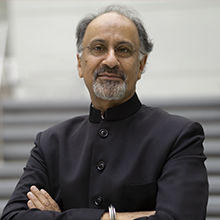 Indermit Gill is Chief Economist of the World Bank Group and Senior Vice President for Development Economics. He brings to the role a broad combination of leadership, expertise, and practical experience working with governments on macroeconomic imbalances, growth, poverty, institutions, conflict, and climate change.

Before starting this position on September 1, 2022, Gill served as the World Bank’s Vice President for Equitable Growth, Finance, and Institutions, where he played a key role in shaping the Bank’s response to the extraordinary series of shocks that have hit developing economies since 2020. Between 2016 and 2021, he was a professor of public policy at Duke University and non-resident senior fellow at the Brookings Institution’s Global Economy and Development program.

Gill is widely regarded for his contributions to development economics. He spearheaded the influential 2009 World Development Report on economic geography. His pioneering work includes introducing the concept of the “middle-income trap” to describe how countries stagnate after reaching a certain level of income. He has published extensively on key policy issues facing developing countries—among other things, sovereign debt vulnerabilities, green growth and natural-resource wealth, labor markets, and poverty and inequality.