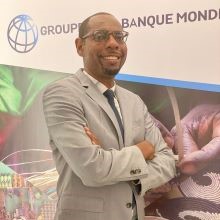 Boubacar-Sid Barry is a Guinean national and an Economist with twenty years of operational experience at the World Bank and the African Development Bank (AfDB). Prior to his appointment as World Bank Resident Representative in Djibouti, Mr. Barry served for six years as Senior Advisor to the Executive Director for Djibouti at the World Bank, where he oversaw IDA replenishment and resource mobilization, IBRD and IFC capital increase package discussions, and fragile states matters. He also coordinated closely with Bank staff on operational matter pertaining to Djibouti at the Board of Executive Directors. Mr. Barry started his career at the World Bank in 2001 as Economist working in the Macroeconomic Department 4 of the Africa Region. In 2008, he joined the Office of the Country Director for Central Africa at the AfDB where he served as Senior Economist based in Tunisia where he worked on country and regional strategies. In 2010 he was deployed to Morocco as the AfDB’s Principal Country Program Coordinator where he managed the largest AfDB program portfolio at the time in Africa before joining the World Bank in 2012.

The World Bank In Djibouti