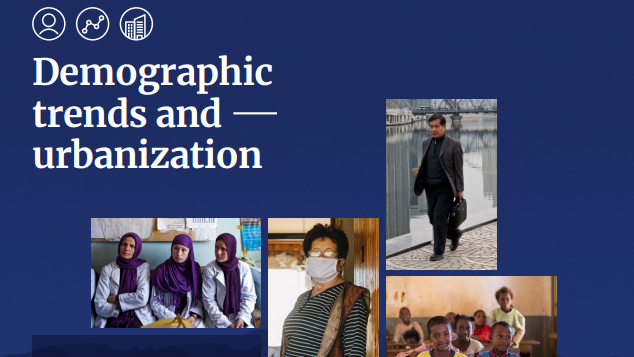 Global demographic trends are at a turning point. As population growth rates continue to decline in every region of the world, and in the face of an unprecedented aging of global population, one question is top of mind for everyone – what do these trends mean for the world’s cities?

This report – Demographic Trends and Urbanization – aims to frame that conversation by tracing the relationship between urbanization and relevant demographic indicators and how demography shapes a country’s desired development outcomes. The report explores how population growth, aging and migration affect the growth trajectories of cities, and how and why city-level demographic trends diverge from national and regional trends.

The analysis of demographic trends is particularly relevant as larger shares of people move to or live in urban areas. The pattern, pace and causes of rural-urban migration continue to be diverse, and significantly influenced by the search for opportunity in cities, the flight from conflict, poverty and climate events, amongst other issues.

To date, the use of city-level demographic trends to project cities’ needs in terms of infrastructure and development remains rare.Most demographic studies tend to focus on the analysis of fiscal trends and implications related to labor force, health and care services and retirement spending.

This report presents an opportunity to start thinking about what the city of tomorrow will look like, and what it will need in terms of infrastructure and services. Not all cities will grow endlessly, so today’s investments must account for of the demographic reality of tomorrow.

Cities’ demographic trends also vary vastly by regions: Some cities, particularly in some large middle-income and high-income countries, are contending with an unprecedented aging of their population, based on low fertility trends and an increase in life expectance. On the other hand, many low-income countries especially in Sub-Sahara Africa - which are also among the least urbanized – have the highest urban growth rates in the world.

In Europe and Central Asia, urban population declined in over half of low- and middle-income countries between 1991 and 2011. The rise in average age in Eastern Europe and Central Asia (ECA) is largely attributable to a decrease in fertility rather than to an increase in longevity, which makes aging trends in ECA unique. The emigration of young people is reinforcing these trends. The region and its cities will continue to see diverse and contrasting patterns of growth and decline as population aging is expected to accelerate across major cities.

The Latin America and the Caribbean region is among the most urbanized regions in the world, having reached an urban majority by 1960 - a milestone achieved globally only in 2008.  Average growth rates in cities today are declining, and some city centers are losing population to the urban periphery. Urbanization is shifting towards small and intermediate cities. The region is starting to age rapidly, a trend that is especially pronounced in urban areas.

The Middle East and North Africa (MENA), is already 64% urbanized. Much of the region’s future urban growth—in absolute terms—is projected to occur in the region’s primary cities although faster growth—in relative terms—is projected to occur in the region’s secondary cities. Conflict and climate-driven migration as well as cross-border movement driven by search for economic opportunity are unique considerations in the region and have been overriding some secular urbanization trends in a subset of countries. Aging is not yet an issue in MENA but is set to rapidly increase over the coming decades. The region’s youth bulge, if managed well, could present a significant demographic dividend with potential higher growth rates, especially in urban areas.

Africa is the fastest growing and youngest region in the world. There is great diversity of demographic trends among African countries and regions.  The region has the highest urban growth rates in the world, but a relatively low share of population living in urban areas. As life expectancy increases, between 2015 and 2050, Africa will have the fastest increase in the world in the number of elderly persons. Small and intermediate cities, not the largest ones, will absorb a bulk of the region’s urban population growth in the future.

In South Asia, a combination of increasing life expectancy, falling fertility rates, and low old-age dependency ratios has created the conditions for a “youth bulge” generation. The region has disproportionately fewer women, especially at birth, compared with the global average, which could have long-term implications when it comes to labor market participation, for instance. Despite the common perception, urban population growth is mainly driven by natural growth and in-situ reclassification rather than rural-to-urban migration. Congestion and weak urban management may also undermine South Asian cities’ pull factors.

The East Asia and Pacific (EAP) region is experiencing rapid urban growth, second only to Sub-Saharan Africa. EAP became 50% urban in 2018, with most urban inhabitants residing in secondary cities. The region also has the largest regional population of elderly but there is an enormous diversity of aging-levels within the region, which are correlated with national income levels. Migration likely has a significant role in driving urbanization levels in EAP.