A New Measure of Rural Access to Transport: Using GIS Data to Inform Decisions and Attainment of the SDGs

This is note #23 in the Connections series. You can download the PDF version of this note through this link.

By Atsushi Iimi and Adam Diehl 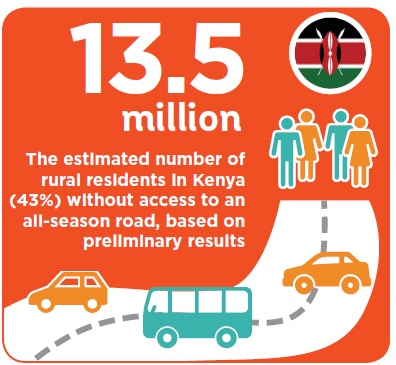 In rural areas of the developing world, where the majority of the poor live, good transport connectivity through road infrastructure and transport services is an essential part of the enabling environment for sustainable growth. A lack of detailed nationwide data has limited previous efforts to develop measures of access to roads in rural areas that would guide policy and investment. The World Bank, with support from DFID, has been piloting a methodology that exploits advances in digital technology to assess population distribution and infrastructure location and quality. The resulting Rural Access Index (RAI) may serve as a useful and cost effective tool for governments planning their rural transport programs and as an indicator of progress towards the achievement of several of the UN Sustainable Development Goal (SDG) targets.

In the developing world, and especially in Africa, a lack of road access isolates farmers from markets, thus keeping the vast majority of agricultural production at the subsistence level. For the same reason, the strength of manufacturing and other local businesses in remote and isolated areas often lags behind that of well-connected counterparts. In the short term,
enhancing rural road connectivity reduces transport costs and improves access to markets and social facilities such as schools and hospitals. In the longer term, it raises agricultural productivity, business profitability, and employment.

Yet, a consistent and replicable method for measuring the accessibility of transport infrastructure has been lacking. The need for it will be crucial for measuring progress toward several SDG targets that rely directly or indirectly on rural accessibility to transport. For instance, SDG 9 (Build resilient infrastructure, promote inclusive and sustainable industrialization and foster innovation) is directly related to rural transport access. SDG 2 aims to “end hunger, achieve food security and improved nutrition and promote sustainable agriculture.” And SDG Target 2.3 is a doubling of “the agricultural productivity and incomes of small-scale food producers … through secure and equal access to ... productive resources and inputs,” an aim clearly reliant on improved access to rural roads (see Connections Note #20).

An initial Rural Access Index (RAI) introduced in 2005 primarily used household surveys to estimate road accessibility, defined population as living within 2 kilometers of an all-season road. Applied in Africa, this measure found that more than 70 percent of the continent’s rural population, or about 450 million people, lacked road accessibility in rural areas.

The survey methodology was the source of several weaknesses in the RAI. Besides being difficult and costly to conduct and update, household surveys cannot provide both consistent and extensive data on road conditions.

Hence, it is easy to imagine access improvements that will never be captured by subsequent surveys.

Development of a New Methodology

The World Bank, with the support of DFID, is devising a new, GIS-based RAI that exploits advances in digital technology. The aim is to create a more accurate, operationally relevant and cost effective RAI that will also aid in monitoring improvements in accessibility. As in the original survey methodology, access to transport is defined as the share of the rural population living within 2 km of the nearest all-season road.

The GIS-based RAI is grounded on three principles:

Consistency across countries is critical if the RAI is to serve as a globalindicator and as a measure of achievement for of the SDGs. Ensuring consistencyhas entailed translating country standards into a coherent global standard andchecking the robustness of the RAI against differing definitions andassumptions. While a small number of inconsistencies will be unavoidable,others will be resolved.

The new RAI will provide highly disaggregated information to policymakers. New geospatial technologies are revealing the highly varied status of rural connectivity in a given country (see the 2009 World Development Report). Such a highly localized level of detail provides the factual supportfor government decisions on how to prioritize new construction and maintenance.

Eight countries, in Africa and South Asia, are currently testing the new RAI methodology, and preliminary estimates are available for Kenya and Mozambique.[1]

Even at this preliminary stage, the richer detail in the GIS-based index on road locations and conditions is suggesting policy-relevant conclusions. For instance, Kenya could attain an RAI of nearly 100 by upgrading and maintaining its existing road network. In Mozambique, however, greater access will require extensive construction of new roads or upgrading of unclassified roads, as well as rehabilitating existing routes.

With the subnational level of the results, the strong correlation between the RAI and development has been confirmed, which makes it directly relevant to the SDGs and the poverty reduction agenda. The RAI has also proven relevant for connectivity to a variety of services and destinations. The standardized and digital nature of the new GIS-based RAI will allow for the
rapid inclusion of many access targets such as schools, hospitals, markets, ports and other destinations.

[1] In addition to Kenya and Mozambique, the methodology is being tested in Bangladesh, Ethiopia, Nepal, Uganda and Zambia.