Bringing Paved Roads to the Hinterland

A cost-saving way to speed travel and transport 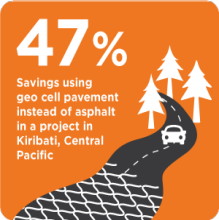 Extreme poverty is a predominantly rural phenomenon, and the poor quality of roads linking remote areas to market centers is one of its distinguishing features. The time and cost of moving goods over poor roads makes rural traders uncompetitive. The problem often remains unsolved because sparse traffic makes it cost-prohibitive to pave rural roads by traditional means. Developing countries need affordable options for extending paved road networks into rural areas. A versatile new construction method using low-cost concrete poured into flexible plastic webbing offers a promising alternative. These “geo cell pavements” cost less to build and maintain than concrete, asphalt, or chip seal pavements. The new pavement technology has been used in Africa, the Middle East, Australia, and the Pacific, offering an affordable way to improve accessibility for poorer remote areas. Geo cell pavements that link rural traders and farmers to market centers could become an important tool in the effort to eliminate extreme poverty.

What Are Geo Cell Pavements?

Geo cell pavements employ flexible plastic webbing made of high-density polyethylene into which concrete is poured, creating interlocking shapes that efficiently transfer traffic loads. The cells formed by the webbing (or formwork) can range in thickness from three to six inches and in size from six inches to one foot square. The result is a flexible sheet of concrete blocks which transfer wheel loads to the underlying soil. Each individual block is supported by surrounding blocks, spreading the load to the underlying subgrade. While thin cracks form between the blocks, these don’t allow water pass through. The road surface can be set on compacted subgrade without laying down aggregate base and subbase layers, a key factor which contributes to cost savings compared with traditional pavements.

Geo cell pavements were developed by the U.S. Army Corps of Engineers in 1975 for erosion control, soil stabilization, and channel protection.[1] Filling the cells with concrete and using them for pavement is a more recent development, brought to fruition with the help of research at the University of Pretoria, South Africa.[2]

How are Geo Cell Roads Constructed?

Existing dirt roads are the typical starting point for roads using geo cell pavements. After shaping the subgrade layer, space for edge restraint beams is excavated and formwork is placed. A small roller or plate compactor can then be used to compact the subgrade for installation of the geo cell. Once the plastic webbing is positioned, the poured concrete can be spread into the cells and finished with a broom. Road cross sections of various widths are available, as are alternative designs which incorporate drainage channels in the center of the road, a feature that can result in significant savings when employed in rocky or mountainous terrain.

Geo cell roads can be built without heavy paving equipment such as rollers, graders or water carts, and so can be installed in constrained spaces such as tight curves and narrow passes. While the cement and geo cell webbing usually must be imported to a work site, sand and aggregate for the concrete can be supplied from local sources which might otherwise be unsuitable as traditional paving materials.

What about Maintenance and Durability?

The suitability of simple, readily available equipment for these projects means that construction and maintenance of geo cell roads can be done locally, using labor-intensive methods, providing a stimulus to the local economy and reducing rural poverty. Geo cell roads are designed for lighter-weight traffic. They work well in handling agricultural traffic from small farmers in remote regions, but not heavy loads that would occur, for example, in a mining-intensive region.[3] Geo cells have not yet been tested in areas prone to frost heaves and are generally recommended for use in warmer climates. The modular nature of geo cells allows for individual blocks to be removed for pothole repair and service installation without the more extensive reinstatement required for traditional pavements. Though the technology is relatively new, geo cell pavements in South Africa have demonstrated service lives of more than 10 years.

Geo cells have recently been used in a World Bank project on the Pacific island of Kiribati, where 4.4 miles of pothole-ridden, unsealed feeder roads were upgraded with geo cell pavement. The cost of supplying road construction materials to a remote coral atoll from Fiji, some 1,200 miles away, presented obstacles to traditional construction methods. Geo cell pavements presented the opportunity to save 28 percent of the cost of chip seal surfacing and 47 percent of the cost of asphalt. The contractor noted long lead times for getting the geo cell formwork and reported difficulty achieving a sufficiently fluid concrete mix. But the challenges were resolved, and the new pavements have significantly enhanced the accessibility of the communities they serve. The success in Kiribati prompted the neighboring Pacific nation of Tuvalu to employ geo cells in a new road project.

Road to the Twin Goals

The World Bank Group’s Twin Goals of eliminating extreme poverty and boosting shared prosperity depend heavily on effective reduction of rural poverty. Poor roads, limited access to markets, and the unworkability of expensive infrastructure projects in sparsely populated areas combine to entrench rural poverty. An estimated 75 percent of the extreme poor in Africa live in rural areas. Poor infrastructure accounts for more than 40 percent of transportation costs—up to 60 percent in landlocked countries.[4] Limited access puts farmers and traders at a disadvantage, and can have negative effects extending into areas such as infant mortality and gender equity.

In sparsely populated regions, the cost of traditional road construction can be difficult to justify economically. Geo cell pavements represent a novel way of addressing the need for all-weather accessibility. Projects involving low-volume roads should consider concrete geo cells as a paving option during project design.

[3] For example, it would take 2000 passes by an 80kN dual wheel standard axle for a 20mm rut to form assuming a subgrade CBR of 10 and a geo-cell layer thickness of 100mm. alternatively, this damage would be caused by 124 million passes by a 50kN axle (representative of a small vehicle). Source: Design charts and author’s calculation.