Will the Digital Revolution Help or Hurt Employment?

By Siddhartha Raja and Mavis Ampah 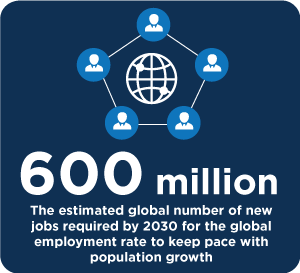 What will technological change deliver in the coming decades? Higher unemployment? Or a wealth of new job opportunities? And what can we do to determine the outcome? Technological change in any given society is never smooth and always negotiated. Although both perils and opportunities await, the ultimate result depends on our choices today. Governments, businesses, and individuals have shown that adapting to changing circumstances can alter the consequences of apparently “inevitable” changes. And developing countries can be profoundly affected by changes seemingly limited to the advanced economies; they must adapt to what is actually a global technological playing field. The World Bank’s recently issued World Development Report 2016: Digital Dividends focuses on strengthening the “analog complements” of the digital economy, including adapting skills to get the most out of the digital revolution (See Connections Note 2016-1). Countries whose governments can facilitate innovation, strengthen education and skill building, and build up the social safety net may be the most likely to benefit from the coming changes.

If one is to believe some of the technology news nowadays, the robots are coming to take our jobs, and there is little we can do about it. In this narrative, the future of work seems to be a shrinking pie and part of a deepening in economic inequality.

But other news says that smart digital tools and machines are already helping to create tremendous opportunity. For example, more than 10 million people—many from the developing world—are working online, often for hourly rates well above the average in their home countries. And smarter and cheaper machines will allow us all to do more satisfying and productive work.

Can we reconcile these two visions of the future and maximize benefits? Doing so depends on adding to these starkly competing narratives three important but commonly overlooked considerations about technological change and work.

The Erratic Course of Technological Change

The adoption of technological innovations is typically erratic. Many dismissed the mobile telephone in the 1980s as a mere luxury or toy; today it is an important part of life for more than half the world’s population. That development contrasts with the evolution of electric cars, which Thomas Edison was designing as early as 1903 but are only now emerging as a commercial reality. And many technologies end up working in ways that their inventors never considered because technology must mix with social, political, and economic realities—as reflected in the intense ongoing debates about the future of the Internet.

In sum, technology does not just appear in our lives. It is invented, modified, sold, and bought. And so it is with robots, driverless cars, and artificial intelligence; rather than being preordained, their appearance in our lives will be the outcome of interactions across a society’s culture, politics, and business. Governments, firms, and individuals will need to make choices that will determine how technology will affect employment rates and other deep social challenges, even if the path and the outcome are unpredictable.

Technological Change Is a Creature of Decisions

Policy and action must focus on how government, business, and individuals will use technology rather than on technological change as an autonomous force. About 125 million children around the world will become of school-going age this year. They will need new skills to create, manipulate, and use new and emerging technologies if they are to be competitive and obtain good jobs. Reforming education and investing in skills will be critical.

Businesses’ adaptability to new technology is equally critical. Companies that have evolved, such as IBM (now known more for services than machines) and Apple (better known today for its smart phones and watches than for its computers), have survived and thrived. Just like their workers, these companies had to learn and evolve. And new companies have tremendous potential to expand and create opportunity: eBay, Uber, and Upwork (an online work platform) have created economic opportunities for many people worldwide. Giving these businesses the climate and support to grow, or the ability to fail in an orderly fashion, will make a difference.

No One Is Immune

Ongoing debates are overlooking how technological change will affect developing countries, and especially the poor in those countries. Globalization means that decisions to invest in technology in advanced economies will affect opportunities in the developing world. For example, if robots take over more of manufacturing in high-income countries, it could mean less demand for assembly work in China and possibly less investment in Africa and other emerging markets.

India and China alone will have about a half billion young people joining the work force in the next 15 years, and 11 million young Africans are expected to join the labor market every year for the next decade. If they cannot find work, their frustrations could undermine national and regional stability and undo decades of progress in reducing poverty. Sustainable development will require investments in technology, in line with the UN Sustainable Development Goals, especially 8 and 9c. Not doing so would perpetuate existing digital divides and be a missed opportunity to address inequality.

For global employment rates merely to remain stable as population grows between now and 2030, the world economy will need to create some 600 million new jobs in the next 15 years—most of them in Asia and sub-Saharan Africa, according to the World Bank’s 2013 World Development Report. Governments need to act now, in partnership with the private sector, to invest more in skills, in improving business environments, and in strengthening the social safety net to protect the vulnerable.

Smart technologies will create new opportunities for prosperity. Rather than being wary of automation or robots—or waiting for chance—we should make strategic choices today. If policy does not prepare now, the risks to sustained and shared prosperity will only increase.

Are We Heading Towards a Jobless Future?