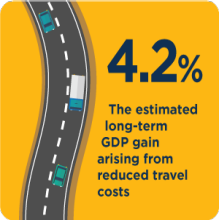 Georgia is upgrading its principal highway, running for more than 350 kilometers between the Black Sea on its western border and Azerbaijan in the east, at a cost of about $2.3 billion, or nearly 14% of its 2014 GDP. Apart from the immediate effects of the construction (financed largely by international institutions), how much will this relatively large investment improve economic conditions in Georgia? Will it significantly reduce travel costs, and if so, how much of the gain will flow through to the whole economy? Answers to those types of questions are rarely quantified for infrastructure projects in developing countries, either because the projects are too small or the necessary country-specific model is lacking. The Georgia project offered a unique combination of circumstances that made the estimations feasible: (1) a large investment relative to the size of the economy, (2) an already existing model and dataset depicting how the sectors of Georgia’s economy interact, and (3) partial completion of the road upgrade that allowed a simulation of expected gains to be informed by actual interim outcomes.

The government of Georgia is bringing its transnational East-West Highway up to international standards to strengthen the country’s position as a transport and logistics hub on the E60 international highway corridor, which runs between China and France. International financial institutions are expected to finance the bulk of the estimated $2.3 billion project, toward which the World Bank has committed about $500 million.

The road carries almost one-fourth of all vehicle traffic in Georgia and almost one-half of its international traffic. At current traffic volumes, upgrading it to the international four-lane motorway standard will reduce travel times by raising the allowable travel speed and, by realigning some sections, reducing the overall length of the highway. The investments will improve connectivity between the Black Sea and Azerbaijan, which borders the Caspian Sea; lower the cost of transport and logistics; and thus improve Georgia’s connection to global markets. Upgrading is finished on about one-third of the road length, and the government is targeting full completion by 2022.

Developing countries typically do not have the institutional capacity to create a detailed macroeconomic model of the domestic economy. Hence, showing how changes stemming from even a large project would ripple through such a country’s various economic sectors to affect the overall economy is usually out of the question.

However, researchers at the ISET Policy Institute, affiliated with Tbilisi State University, had already developed the economywide data (in a social accounting matrix, or SAM) and a corresponding macroeconomic model for Georgia. These made a study of the impacts of the road upgrade both practical and cost effective.[1]

The ISET researchers had constructed a static computable general equilibrium model (CGE), a framework well suited to the inquiry. For example, a partial equilibrium model, less complex and data intensive, is most suited for analysis of a single economic sector. Unlike a CGE model, it does not take into account the fact that changing the level of output in one sector (or its costs) affects other sectors.

In conjunction with SAM data, a CGE model traces the effects of a change through all other parts of the economy. It essentially produces a “with“ and “without” picture—estimating the economy’s GDP, income, and other variables at the end of the measurement period both with and without the shock.

With the CGE model and SAM data, the study aimed to determine the extent of the economic stimulus and welfare improvements that would be generated by use of the upgraded road. The shock would be the reduction in transport costs generated by lower vehicle operating costs and lower travel times at the current volume of traffic on the road.

Lower travel time allows other sectors to boost production and use more transportation. Lower vehicle costs serve to free resources for other sectors that are boosting output.

The results showed that the reduction in travel costs resulting from upgrading the East-West Highway has a positive effect on growth and welfare. Compared with outcomes in the absence of an upgrade, Georgia’s real GDP would be 4.2 percent higher in the long term. This figure would be somewhat lower if externalities such as global and local pollutants from generated traffic had been added to the analysis. On the other hand, the overall impact on GDP of the EWH would be larger than 4.2 percent, once the impacts of construction itself have been included, as have the road safety benefits.

All quintiles of household income made long-term welfare gains ranging from 2.6 percent for the lowest quintile to 4.4 percent for the highest, lower quintile group. The first two quintiles with the lowest income—the bottom 40 percent with annual income up to GEL 1000 (USD 602)—gain relatively less than other household groups reflecting lower usage of transport for that group.

Limits and Extensions of the Model

Modeling the macroeconomic effects of the highway upgrade could be extended in several ways. First, it could be used to assess the impact on neighboring countries, particularly important because the East-West Highway is a gateway to Black Sea ports.

Second, assuming the data requirements could be met, the model could assess the regional effects of the highway project within Georgia.

Lastly, constructing a dynamic CGE model (tracking impacts of annual developments including changes in the capital stock) could strengthen the assessment of key economic effects, including trade impacts.

[1] The data on transportation costs were collected as part of the World Bank’s project feasibility studies. The cost of recalibrating the model and collecting additional data was $31,000, excluding staff time. The expense included developing a new SAM to assess distributive and sectoral impacts, creating new code for the model, and estimating changes in transport costs.