Building Coastal Resilience to Protect Lives and Livelihoods in Bangladesh 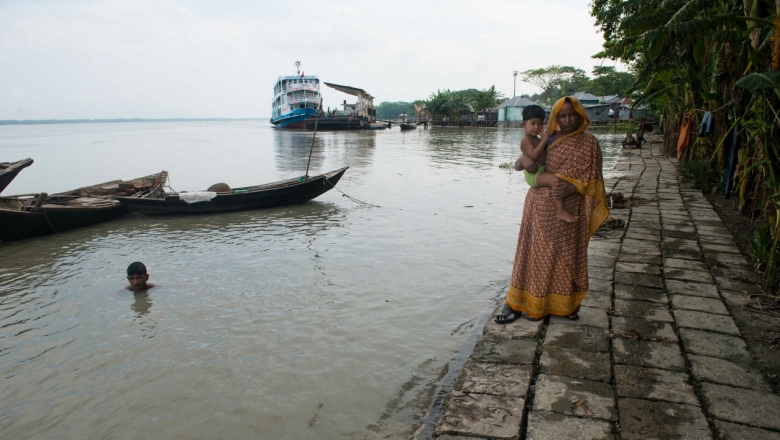 The World Bank has brought a combined investment of $776.7 million into the development of Bangladesh’s coastal zone. Since 2013, the Coastal Embankment Improvement Project has helped Bangladesh mitigate some of the impact of cyclones and flooding and improve emergency response.

Bangladesh has improved the resilience of its highly vulnerable coastal zone, having an integrated approach of cyclone shelters, strengthened polder systems, nature-based solutions, and early warning systems. With support from World Bank projects, lives and livelihoods have been protected. An estimated 333,000 people have greater protection from tidal flooding and storm surges and 424,000 people now have access to shelters.

The development of a safe and habitable coastal zone is a longstanding priority for Bangladesh. Spanning more than 580 kilometers and housing more than a quarter of the country’s population, the area is key to its social, economic, and environmental well-being. But it remains extremely vulnerable to climate-related hazards such as cyclones, storm surge, coastal erosion, and sea level rise. Cyclone Bhola (1970), the deadliest cyclone on record, claimed an estimated 300,000 lives. With the help of donor partners including the World Bank, the government has invested in disaster risk reduction, mitigation, and preparedness systems ranging from embankments and cyclone shelters to community-based early warning systems to nature-based solutions. These initiatives have saved lives, reduced economic losses and protected crucial development gains.

The number of casualties from cyclones has dropped by a factor of 100 and living conditions for coastal communities have improved significantly. However, continuous improvement of knowledge, planning, infrastructure, and investment are needed to deal with the ever-evolving threat, which has been intensified by climate change.

The CEIP-1 was designed to support the rehabilitation and upgrade of protection polders—areas of low-lying land reclaimed from the sea—to mitigate the effects of tidal flooding and frequent storm surges. It was also designed to improve agricultural production by reducing saline water intrusion, thereby supporting better livelihoods for those living in the coastal zone. The rehabilitation of 10 polders in six coastal districts will provide direct protection for more than 724,000 people living inside the polder boundaries, enhance their livelihood through increased agricultural production and strengthen the overall resilience of the coastal areas.

The MDSP is aimed at saving the lives of those at risk from cyclones and storms while providing safe schools for children in the communities most vulnerable to natural hazards. These will provide protection for more than 424,000 people in vulnerable coastal communities. The shelters are also used as primary schools, providing over 1,500 new and improved classrooms for over 175,000 children. The MDSP is the single largest program for disaster shelters in Bangladesh, integrating into the design such technological innovations as solar panels and rainwater harvesting devices and reflecting improved sensitivity to gender, age, and disability.

The project has created increased protection for more than 333,000 people, half of them women, by creating greater resilience to climate change in selected polders, reducing tidal flooding and storm surges.

The CEIP-1 and the MDSP bring a combined investment of $776.7 million into the development of Bangladesh’s coastal zone. As part of an integrated and multi-pronged approach to disaster risk management, they provide protection for the lives and livelihoods in the coastal region. Since 2013, the CEIP has helped Bangladesh mitigate some of the impact of cyclones and flooding and improve emergency response:

For the Coastal Embankment Improvement Project Phase 1 (CEIP-I), the International Development Association (IDA) provided $375 million in 2013 and the Climate Investments Funds (CIF) provided $25 million, for a total of $400 million. It is due to run until June 2022.

For the Multipurpose Disaster Shelter Project (MDSP), the International Development Association (IDA) provided funding of $375 million in 2014. The project is due to be completed in December 2021.

Out of the total of $400 million for the CEIP-1, $25 million is from the Pilot Program for Climate Resilience (PPCR), a targeted fund within the Climate Investment Funds (CIF) framework. The Bangladesh Water Development Board is the implementing agency for the project.

For MDSP, investments are led by Bangladesh’s Local Government Engineering Department (LGED) in coordination with the Ministry of Primary and Mass Education. The community preparedness activities are carried out through the Cyclone Preparedness Program, which is led by the Ministry of Disaster Management and Relief in partnership with Bangladesh Red Crescent Society. The Economic Relations Division, Ministry of Finance, Government of Bangladesh provided $1.7 million for the project.

The CEIP and MDSP build on the work of decades of past World Bank projects to protect Bangladesh’s coastal zone, and more investments will be needed to create a more comprehensive disaster risk and sustainable development strategy.

The CEIP-1 is the first phase in a long-term program to upgrade the entire embankment system, which consists of 139 polders along 6,000 km of embankments. The effectiveness of shelters and improvements to their design under the MDSP have been tested and proven. They form an integral piece of the disaster risk management approach across the entire delta. Upcoming projects to addressing the impact of flooding further inland will incorporate these improved shelter designs as well as other lessons learned from this project.