Cities in India Bet on Digitization for Better Services 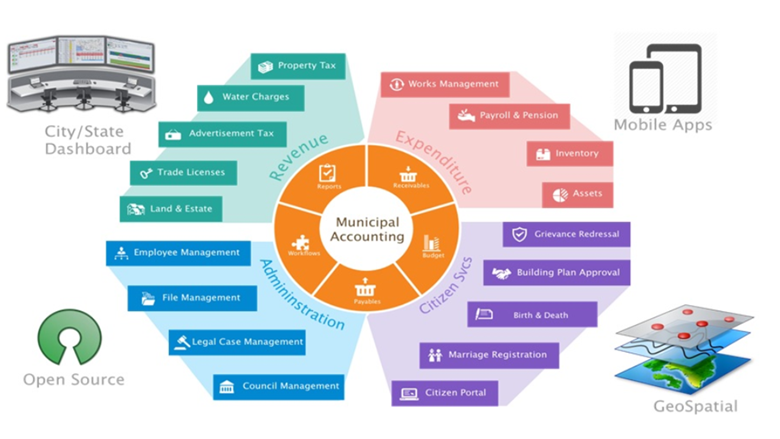 In Andhra Pradesh, a state located in the southeastern part of India, municipalities are leveraging innovative technologies to deliver important services to citizens such as provision of clean water, sanitation, property registration, collection of municipal taxes, provision of streetlights and more.

In the early 2000s, the urban local bodies in Andhra Pradesh (AP) couldn’t keep up with the growing demand from population growth. As cities expanded, provision of urban services such as roads, water and sanitation fell short.  For instance, piped water coverage ratio had declined by over 10 percent in cities between 1991 and 2001, and municipal sewerage systems served fewer than 20 percent of residents. These service deficiencies were largely due to inadequate municipal management including under-collection of property tax, unauthorized construction and the proliferation of unplanned habitations such as slums.  Municipal governments had low levels of transparency and grievances were not addressed on time.

To improve urban service delivery in AP, as well as enhance capacity of urban local bodies (ULB’s) to sustain and deliver municipal services more efficiently, the government of AP and the World Bank designed an innovative artificial intelligence-based digital platform for provision and monitoring of municipal services across 110 urban local bodies (ULBs). Under the project, several initiatives were undertaken to improve service delivery, such as the physical provision of piped water connections in 110 municipalities and the creation of a new online building permit provision system linked to state of the art digital platforms to allow citizens to make online applications for new services and register grievances in case of poor service delivery.

New apps were developed, and citizen’s grievances were geo-tagged with online visibility, thus improving transparency and at the same time fixing responsibility of a municipal engineer to resolve the problem within a legally stipulated time period. All this could be done through the new PuraSeva digital platform.

Training and capacity building programs were essential components of the program. It helped reduce resistance from government staff and encouraged the uptake of new technology by citizens. Government staff across all 110 urban local bodies (ULBs) in AP received training on using the building permission platform; over 1,000 ULB staff were trained in the use of drones to capture GIS data; and other staff were trained in using the new systems.

In addition, Andhra Pradesh was the first state in India to implement a unique digital door numbering system whereby a property was given a unique digital address, visible on a GIS map and linked to Global Positioning System (GPS).  Using this technology, ULBs could track online if municipal services, like water supply or garbage collection, have been delivered at an address. This information was linked to the Enterprise Resource Planning (ERP) dashboard making it easy for municipal officials to monitor & track even the garbage collection process and take remedial action in case of delays.

Citizens benefited from digital technology as it enabled them not only to take advantage of better service delivery, but to do so at a lower cost and with less human interaction. Citizens could access services or lodge grievances through multiple channels including the PuraSeva mobile phone application, citizen service centers, websites, or through phone calls.

The World Bank committed an IBRD loan of USD 300 million to the governments of Andhra Pradesh and Telangana, for the Total Project Cost including state share was US$350 million. The digital technology intervention was a sub-component of this project cost  about USD 10 million.

Government of Andhra Pradesh (AP), Department  of Urban Development was the key implementing agency, although the project involved coordination and received support from  several other government departments within AP. such as the department of Information Technology, Finance & Audit department and the Chief Minister’s office.

Following the success of the digitization of municipal bodies in Andhra Pradesh, the state of Tamil Nadu is implementing a digital-based program for ULBs in about 136 municipalities. It now also plans to digitize about 528 town panchayats across the state. The states of Andhra Pradesh, Karnataka and Tamil Nadu offer models for other states to emulate and several states are adopting technology based urban solutions under The National Smart Cities Program.

Technology has enabled citizens to get municipal services faster and more efficiently. If municipalities fail in delivering services, citizens have multiple ways today to lodge complaints including online apps, such as the Puraseva app. Getting a building plan approval used to take months.  Now it can be given online within hours if all papers are in order as the new building plan approval system developed under this project now uses artificial intelligence to process applications. Over the project period of about 7 years, the new digitized system has benefited over 14.6 million urban residents through improved accountability, transparency, better citizen interface, and enabled 110 ULB departments to coordinate, prioritize and plan initiatives.