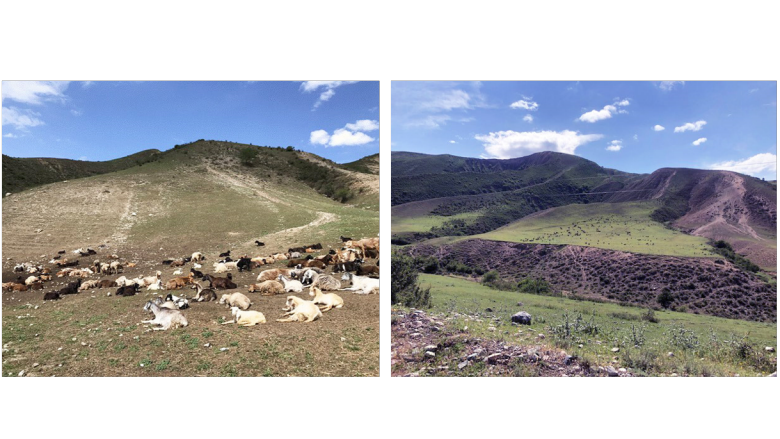 Challenge
Kyrgyz Republic, one of the poorest countries in Europe and Central Asia, was recovering from economic shocks and political instability.  As half of the population and the majority of the poor live in rural areas, agriculture is key for reducing poverty, improving rural-urban income inequality, increasing food security and generating rural employment. The 2010 drought severely affected the agriculture sector and its contribution to economic growth and poverty reduction declined. Livestock production – which accounted for almost half of agriculture Gross Domestic Product (GDP) – was important for rural household food security, providing regular income and acting as a social safety net against hardships and economic distress. However, livestock production was suffering from poor animal husbandry practices, poor pasture and feed quality and overall access to feed, poor animal genetics, and animal health issues. Livestock production in Kyrgyz Republicis based on pasture feeding as the country has vast areas of mountain pastures rich in valuable grasslands. However, years of unsustainable use of pastures near communities degraded them and reduced their value for animal grazing. On the other hand, more remote mountain pastures were significantly underused, due to years of underinvestment in infrastructure and lack of management of these natural resources. The Pasture Law adopted in 2009 helped address many of these issues by transferring management authority to Local Self-Government Bodies (LSGB) and subsequently to Pasture User Unions (PUU). This change was consistent with traditional systems of pasture management and allowed local communities to take charge of their natural resources. The Bank had supported the initial design and implementation of reforms, but the consolidation of the law’s achievements required a follow-up project to help PUUs become inclusive, technically competent and financially sustainable organizations.

Approach
The Pasture and Livestock Management Improvement Project built on earlier support provided by the Bank on necessary legal reforms and was designed to further enhance management of pasture and livestock to improve livelihoods of the rural population and to increase the productivity of the livestock sector. . The project helped prepare and implement Community Pasture Management and Use Plan (CPMUP) to strengthen community-based governance and management through training, legal support, infrastructure subprojects and pasture boundary demarcation and inventory. It strengthened community-based veterinarians to provide essential animal health services, as well as helped strengthen national veterinary authority to strengthen overall animal health situation in the country. The project also enhanced the capacity of state pasture institutions and the management and investment of forestry enterprise pasture.

Results
The key results achieved by the project between 2014 and 2019 include the following:

Bank Group Contribution
The World Bank, through the International Development Association provided credit of US$6.2 million and an IDA grant of US$4.7 million.

Partners
The project enjoyed strong support the Government of Kyrgyz Republic. In addition, the project was prepared in close collaboration with the Government and local communities which helped to identify needs in pasture management and infrastructure.

Moving Forward
Pasture users noted the positive effects of pasture management plans. The continuous support of local governments to the established institutional arrangements alongside PUUs’ increasing financial stability reflects the sustainability of the project outcomes. Climate change may cause pasture deterioration and loss of productivity in project locations. In this regard, activities initiated by the project like monitoring of pasture conditions, just-in-time alerts on weather changes to farmers should help pasture communities mitigate expected effects.

Beneficiaries
During 2014-2019, 197,268 people, including 98,634 women, directly benefited from the project with enhanced adoption of improved livestock practices. The micro-projects implemented within the project had 181,100 beneficiaries, including 68,300 women.