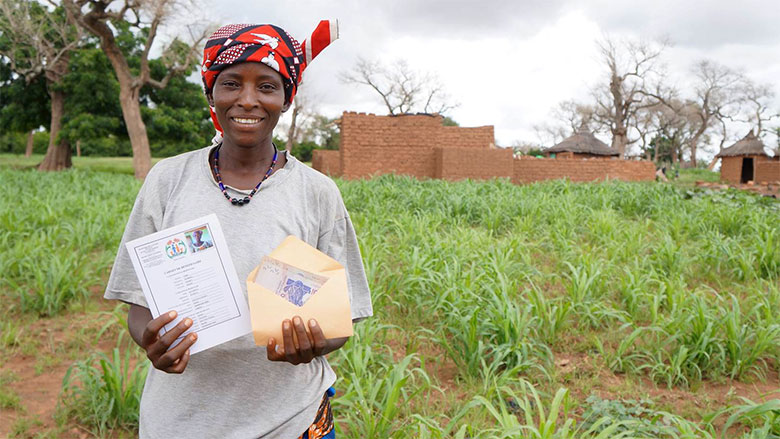 The cash transfer component of the Social Safety Net project brings a smile to more than 100,000 beneficiaries in Burkina Faso.

The Burkina Faso Cash Transfer project, known locally as Burkina-Naong-Sa Ya, which is largely financed by the International Development Association, is the centerpiece of Burkina Faso’s social safety net system. As of May 2019, the project had reached more than 550,000 beneficiaries, a majority of whom are women. It also piloted an adaptive modality that can be scaled up to enhance resilience to food insecurity. The project is expanding to additional regions and is expected to reach more than one million beneficiaries by 2024.

In Burkina Faso, poverty continues to remain widespread. In 2014, 40% of the population was living in poverty, down from 50% in 2003. However, the absolute number of poor did not change significantly, standing at about seven million people, due to rapid population growth. Clustering around the poverty line means that a large part of the population is vulnerable to falling into poverty. Two thirds of households report that they suffer from shocks each year, mostly related to natural hazards. Poverty is largely a rural phenomenon, with about 90% of the poor living in rural areas. The 2017 Systematic Country Diagnostic (SCD) for Burkina Faso identifies the following key challenges to reducing poverty: (i) improving the management of natural resources, (ii) stepping up skills development, and (iii) reducing gender inequalities.

Rapid population growth is putting pressures on the delivery of basic services. Growing at an annual rate of 3.1%, the population is projected to increase from estimated 19.5 million in 2017 to 29 million in 2030. In addition, Burkina Faso hosts over 25,000 refugees, the majority of whom is from Mali, and more than 83,000 people have been internally displaced. Burkina Faso is also a transit country for mixed migratory flows.

Security along the borders with Mali and Niger has deteriorated in the past few years, with a marked intensification of security incidents in 2018. As a result, the government has declared a state of emergency in 14 provinces of seven regions in the country, including the Sahel and the North.

World Bank (WB) engagement in Burkina Faso focuses on three areas, including (i) accelerating sustainable private-sector led growth for job creation, (ii) investing in human capital and social protection systems and (iii) strengthening governance and supporting citizen engagement. Contributing to focus area 2, the World Bank is delivering the Social Safety Nets project. This project applies a rigorous and fair method to identify the poorest, pays them regular cash transfers during three years and accompanies them through social work to improve their access to health, good nutrition and education. The project has recently included enhancements to reach the refugees and host population of the Sahel, through public works, intensified accompanying measures to prevent GBV, child marriage and forced labor and radio based primary schooling in areas where schools had to close under terrorist threats.

The Social Safety Nets project, which is financed in large part by the International Development Association (IDA) with support from trust funds, has provided an important contribution to Burkina Faso’s progress towards reducing poverty, strengthening human capital and increasing resilience. The results achieved include:

The activities are further supported by additional Bank-executed trust fund resources for analytical and diagnostic work, as well as a rigorous impact evaluation. These include multimillion additional funding from the Sahel Adaptive Social Protection Program, as well as from the Energy Sector Management Assistance Program (ESMAP) to assess the incidence of fuel subsidies. Moreover, nearly half a millino from the Strategic Impact Evaluation Fund (SIEF) is contributing to the provision of rigorous evidence on how to deliver integrated early childhood interventions, specifically focusing on the synergies between nutrition, child stimulation, and cash transfers as well as helping inform government decision-making about how to effectively manage and scale up the cash transfer program to the national level in Burkina Faso.

On May 29, the World Bank’s Board of Directors approved an additional financing to the Social Safety Nets project of $110 million, drawing on the following funds:

Throughout the implementation of the Social Safety Nets project, the World Bank has maintained close partnerships with other development partners and humanitarian agencies, as well as different levels of government partners in Burkina Faso. Development partners include those present in Burkina Faso, such as the European Commission and the African Development Bank. Close coordination with humanitarian actors, including the World Food Programme (WFP) and United Nations High Commissioner for Refugees (UNHCR), has contributed to exploiting synergies as well as avoiding duplication. As part of the additional financing, a deliberate decision was made to provide support to the communities surrounding refugee camps while UNHCR would focus exclusively on refugee camps. UNHCR has further supported the World Bank in monitoring the Burkinabe legal framework for refugees, as part of requirements put in place for the IDA18 Refugee Sub-Window.

In the context of the project’s work towards putting in place an adaptive social protection system, the World Bank has worked closely with development agencies, humanitarian partners, non-governmental organizations and various government stakeholders to implement a harmonized framework for determining food insecurity and to put in place the foundations for a unique social registry.

Through the recently approved additional financing of $110 million for the Social Safety Nets project, the World Bank has reiterated its commitment to strengthening the social protection system in Burkina Faso. The additional financing will serve to expand cash transfers to further regions and additional beneficiaries. The first additional region is the volatile Sahel region which borders Mali and Niger. By 2024, the project intends to reach more than one million beneficiaries.

Due to the substantial number of refugees and internally-displaced persons, particularly in the North of the country, the World Bank will be providing support to refugees and host communities through a new component for Labor-Intensive Public Works (LIPW) that will provide a predictable income for the poor and vulnerable, as well as improve public infrastructure.

Drawing on the lessons learned from early activities putting in place an adaptive social safety net, the World Bank will continue to expand adaptive cash transfers to those suffering from economic shocks. This is to a large extent enabled by additional financing from the Sahel Adaptive Social Protection Program (SASPP) from the German government and AFD. Given the success of the Social Safety Net project, other donors have expressed interest in supporting the project. The German Development Bank (KFW), for example, is currently appraising providing further funding to the project to expand to additional regions. As part of the expansion, the project will continue strengthening systems that enable an adaptive social protection system in the long-term.

Minata Sawadogo and her husband were not always able to provide three meals a day for their seven children. One year, Minata’s son Salif got very sick and couldn’t attend classes to obtain the certificat d’études primaires élémentaires (primary school diploma). He lost a lot of weight and people said he was going to die. The memories are still painful for his mother. “The elders in the village thought that Salif would not make it and told me to prepare for his burial,” recounts Minata. “It was because of the transfers that I received from the Burkin-Naong-Sa Ya project that I was able to take him to the hospital for proper treatment.” Today, Salif has recovered and is back in school. This gives great hope to his mother who is convinced that by completing his education, Salif will be able to lift the entire family out of poverty for good. Minata also used the cash transfers to buy livestock and start rearing goats to supplement her income and better provide for her children.