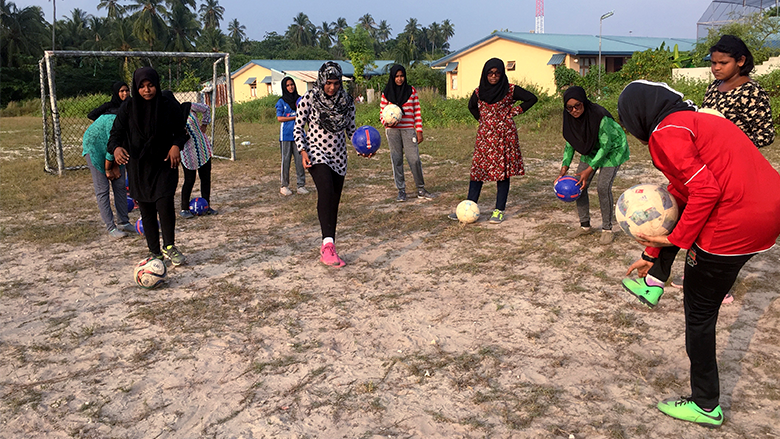 A five-day workshop on an island in the Maldives used soccer training, along with classes and discussions, to empower 21 young girls to challenge gender stereotypes and rethink their perceptions of their future. Led by trainers from the Maldivian women’s national soccer team, along with community facilitators, the workshop was a successful pilot program for what is envisioned as a long-term approach to changing the trajectory of women’s lives.

Despite efforts by the government of the Maldives to increase employment opportunities for youth, including the establishment of employment quotas for Maldivians in tourist resorts, results have been underwhelming. For young girls in particular, social and gender norms constrain their role in society. Relatively few jobs are perceived as suitable for young women, and there is a dearth of female role models in the workforce. Girls see their options as limited, and often end up leaving school and starting a family at an early age.

Unemployment is a challenge for all youth in the Maldives — in 2016 the unemployment rate among Maldivians ages 15 to 24 was 16 percent, almost five times higher than their older counterparts (25-64). Many young women are discouraged from participating in the labor market. Almost one-third of young females are not in employment, education, or training.

A stark self-selection into “gender-typical” jobs exists in the Maldives, with young women preferring clerical or administrative jobs and young men preferring technical jobs. While young men cite the lack of suitable employment matching their education or training, young women cite responsibilities at home, such as housework or child care, as constraints on entering the labor force. Indeed, religious and cultural considerations to some extent discourage young women from seeking work outside the home. Young women are subject to strict parental monitoring and often marry young, and they are less likely than their male counterparts to be encouraged to pursue education.

Almost one-third of young women in the Maldives are not employed, in school, or undergoing training.

In a pilot intervention with 21 girls aged 14 to 16 in the island of Nolhivaranfaru, in the Haa Dhaalu Atoll, the World Bank, in collaboration with the United Nations Development Programme, set out to test whether a workshop with an unconventional twist could change girls’ perceptions of their future possibilities. In a country where soccer is traditionally male-dominated, the workshop centered around soccer training sessions led by female players.

Choosing soccer instead of handball or volleyball, usually played by women, was deliberate. Two players from the Maldivian women’s national soccer team led the girls in drills and scrimmages, conveying the message that women and girls can do anything they set out to do. Along with one soccer session each day, the girls attended seven classes, skills training sessions, and discussions led by four facilitators with experience working with young people. The workshop included sessions on social and gender norms, for girls and for parents, as well as on growth mindset and career guidance.

Separate discussions held by the team with parents helped deliver the message of empowerment not just to the girls, but to their families.

Boys at first mocked the girls for playing soccer. But over the course of the weeklong workshop, the girls and boys bonded over the sport, with boys offering suggestions to the girls on how to improve their game.

To better understand the difference the workshop was making in the lives of the girls, the World Bank team collected comparative data from a group of girls and their parents on the nearby island of Nolhivaramu to gauge the effect of the program. 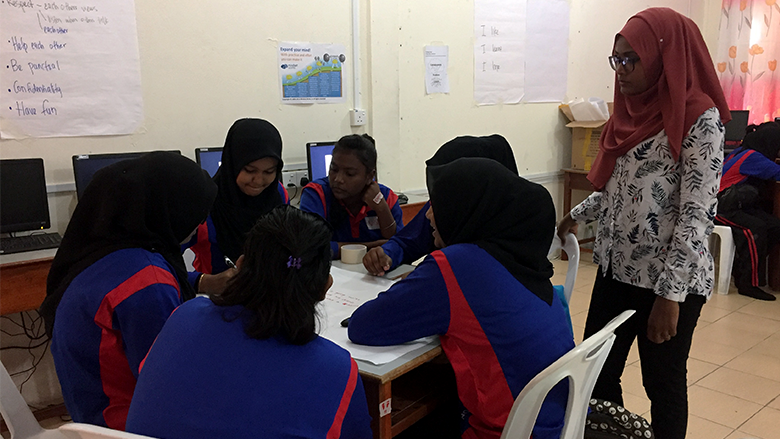 Girls who attended the workshop became less tolerant than before toward gender stereotypes. Their opinions changed about the suitability of girls undertaking jobs traditionally held by men. And they argued that women should work even if their husbands already earned enough to support them, and if they have children.

Girls who participated in the workshop also gained self-confidence. The parent of one of the girls said her daughter had been isolated and shunned by school classmates. She said that in contrast, her daughter had made many friends at the workshop, enjoyed playing soccer and had grown in emotional strength.

The focus group discussions yielded suggestions for future interventions. They include presenting girls and boys with role models in non-traditional occupations, helping guide students on where to study and where to work, presenting girls especially with information on scholarships and job websites, resume and interview tips. To learn more, read the Changing Aspirations and Stereotypes in the Maldives report.

The workshop was conceived and implemented by the World Bank’s Poverty and Equity Global Practice and the Mind, Behavior, and Development Unit (eMBeD). The unit works closely with project teams, governments, and other partners to diagnose, design, and evaluate behaviorally informed interventions. By collaborating with a worldwide network of scientists and practitioners, eMBeD provides answers to important economic and social questions and contributes to the global effort to eliminate poverty and enhance equity.

The World Bank contributed $100,000 through the International Bank for Reconstruction and Development (IBRD) to support the design of the workshop and the analysis of the data.

The cost of implementing the workshop and collecting the data was funded by the Integrated Governance Program of the United Nations Development Programme. 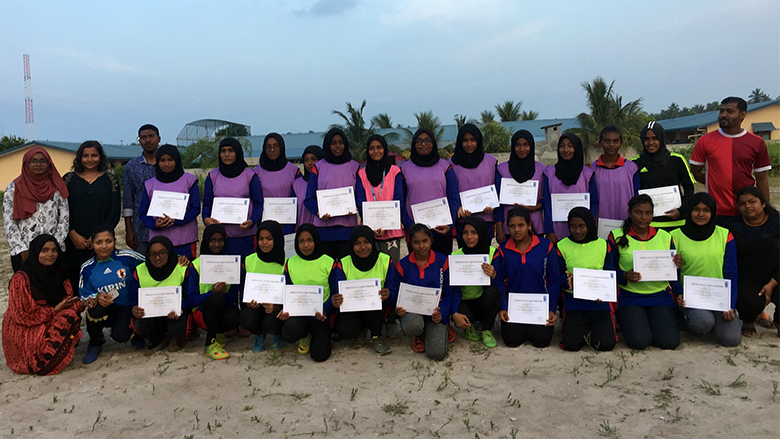 The pilot workshop suggests that interventions that provide guidance and role models for young women are likely to help young people break societal barriers, pursue education, and enter areas of the work force.

The lessons from the project have informed the design of a lending project on employability and education approved by the World Bank Board.

The World Bank in Maldives

Changing Aspirations and Stereotypes in the Maldives