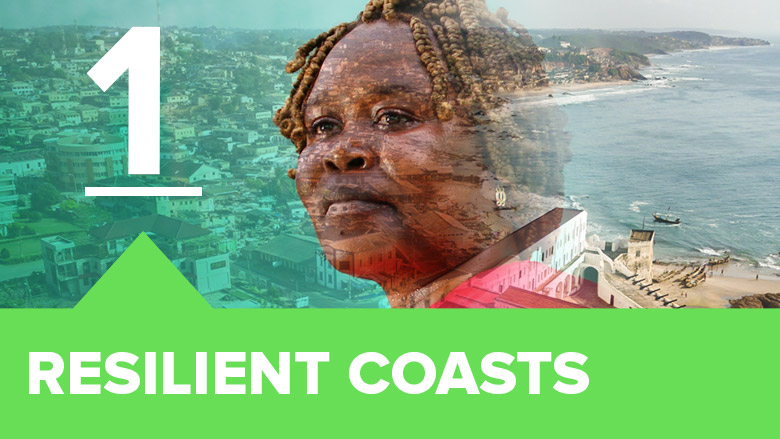 Coastal erosion and flooding in West Africa severely threaten people’s communities, livelihoods, safety and investments. Stronger storms and rising seas are wiping out homes, roads and buildings that have served as landmarks for generations. Some beaches are deeply mined for sand, protective mangroves are deforested, and people are increasingly vulnerable to the impact of climate change. Some residents have no choice but to move away—a trend that is breaking up communities and changing the social fabric for future generations.

Every year, an average of 500,000 people living along West Africa’s coastline are adversely affected by floods and aggravated coastal erosion. In some areas, the coastline is eroding by as much as 20 meters or more per year. In 2016, about a third of the region’s population (over 120 million) lived in coastal provinces.

Rapid and often unplanned urbanization has devastated the natural landscape that once served as a buffer for erosion and flooding. About 80 percent of coastal pollution originates from land-based sources, primarily industrial, agricultural and urban. These developments disproportionately affect the poorest and most marginalized, and will intensify due to climate change.

Coastal erosion and flooding affect coastlines around the world. The World Bank Group is the single largest provider of climate and disaster resilience-related investment finance. It is a significant player in resilient infrastructure finance through regional programs including, Caribbean Resilience Initiative and Program, Pacific Resilience Program and ongoing national programs; and the Southwest Indian Ocean Risk Assessment and Financing Initiative. The Bank has also launched the Small Island States Resilience Initiative.

While countries have started to act to contain erosion and flooding, there is an urgent need for partners to mobilize financing through coordinated regional action. Collaboration at the policy and technical levels helps countries manage erosion hotspots, and maintain the livelihoods that a healthy coastal ecosystem provides to people and economies.

West African countries are working together to address challenges posed by their shrinking coastline. The West African Coastal Areas Management Program (WACA) was developed by the World Bank Group in partnership with the program’s ultimate beneficiaries: the people who live along the West African coast and depend on it for their livelihoods, nutrition, food security, and prosperity. This program targets all 17 West African countries to improve the management of shared natural and man-made risks affecting coastal communities.

The WACA program provides countries with access to technical expertise and finance to support sustainable development in the coastal zone, using management of coastal erosion and hazardous flooding as an entry point. The World Bank and its partners are pioneering this first-of-its-kind regional approach to address severe coastal erosion.

The first West Africa Coastal Resilience Investment Project (WACA ResIP) was approved by the World Bank in April 2018. The financial package includes a credit of $120 million and a grant of $70 million from the World Bank's International Development Association (IDA); and a grant of $20.25 million from the Global Environment Facility. initially cover six countries (Benin, Cote d’Ivoire, Mauritania, Sao Tome and Principe, Senegal and Togo). It will work with existing regional institutions, including the West Africa Economic and Monetary Union.