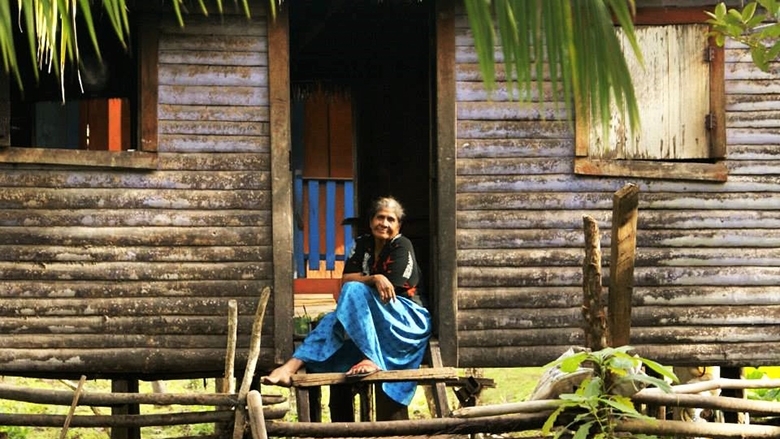 Beneficiary of the First Title of Community Property in favor of the Miskito people of KATAINASTA. Photo: PATH II

Land tenure security improved in Honduras between 2011 and 2017. About 90,000 urban and rural households have been registered in a parcel-based system, and more than 50,000 new land titles have been awarded, 48 percent of which went to a female head of household. The lands of 78 Miskito communities have been delimited and demarcated, and the communities benefited from receiving communal land titles; four Territorial Councils received inter-community titles. About 117 indigenous community leaders, of which 48 were women, have been trained in alternative dispute resolution processes, and 109 community leaders have been trained in land and natural resource management. Three protected areas have been delimited and demarcated. Ten municipalities have been surveyed and cadastral information generated. Six of the municipalities surveyed benefited as well from municipal territorial plans.

Land tenure in Honduras was often insecure due to unreliable cadastral and legal information, weak inter-institutional coordination, and inadequate conflict resolution mechanisms. Rural areas faced the most significant challenges, particularly in La Mosquitia, where indigenous peoples have been particularly affected by land dispossession and lack of effective legal protection.

The Second Land Administration Project (PATH II) was the second phase of an adaptable program loan aimed at increasing land tenure security in Honduras by improving decentralized land administrative services, including access to more accurate information on property records and transactions. During the first phase (PATH I), the Property Institute was created and attached to the Ministry of the Presidency to establish, maintain, and update the integrated property system. The project relied on consultative and participatory processes as well as conflict mitigation and resolution that benefited indigenous and nonindigenous communities in rural and urban areas.

The following results were achieved during the lifetime of the project, from 2011 to 2017.

Contributed to sustainable land and natural resources management by:

Strengthened legal and institutional framework by:

Strengthened public and private partnerships by:

The World Bank, through the International Development Association, provided a loan of US$ 32.8 million to finance Honduras’s Second Land Administration Project.

The UN Food and Agricultural Organization (FAO) was a key partner of the Bank and the Honduran government and provided technical expertise during project implementation as well as for monitoring and evaluation, economic analysis, and appraising the effectiveness of the final project.

The project benefited urban and rural households. Emphasis was placed on improving outcomes for women, particularly those who are heads of their households. The Miskito indigenous people benefited from the demarcation and titling of 78 communities. At an institutional level, the National Agrarian Institute and the Institute for the Conservation and Development, Protected Areas and Wildlife, were among the government institutions benefiting from access to SURE. The capacity of selected municipalities was strengthened by the cadaster and land record system, and six were certified as associated municipal centers, which built their capacity for territorial planning and land valuation.

Although a follow-on project has not yet been prepared, the Property Institute has indicated its interest in a new Bank-financed operation focused on strengthening and consolidating the SINAP and the digitalization of land records at the national as well as municipal levels.