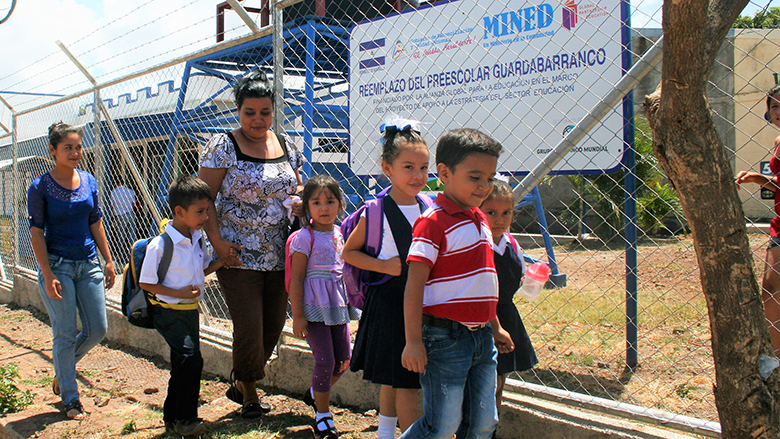 Nicaragua is a clear example of the increasing awareness about the importance of investing in quality Early Childhood Education (ECD) to support development in low and middle-income countries. Previous research in other countries has shown that investments on quality ECD and daycare yield relevant social returns (Naudeau & Hasan, 2015: 4). Also, our work in the country is an example of how these kinds of programs can produce multiple positive spillovers and results; from a growing commitment within the National Government to boost the expenditure per student, to a reduction of the gaps in quality between rural and urban preschools nationwide.

Historically, Nicaragua has struggled to make investment in preschool education in rural areas a policy priority, creating a gap between rural and urban areas, both in terms of coverage and quality. In 2013, only 47 percent of the rural children were enrolled in preschool education, compared to 70 percent in urban areas. Additionally, preschool education in rural areas was mostly provided through a “community-based modality” (covering 70% of the students enrolled in rural areas in 2016), operating in private locations, without quality standards and taught by volunteers who most of the times lack official certification [1] (70% of total preschool teachers are not graduated), resulting in very low quality education.

The ESSSP, financed by the European Union, the Global Partnership for Education and the World Bank and managed by the latter, focused on a holistic transformation of the preschool education supply through the design and implementation of a new preschool education quality model (PEQM).  As presented in figure 1, the quality standards of the PEQM comprise a range of areas, on which the project has made significant contributions.

Assessments. To measure improvements in the system due to the new policies, the national government, with technical assistance from the World Bank, has created a new Integrated Early Childhood Development Monitoring and Evaluation System (SEIDI) as a way to assess the development and learning of children attending preschools as well the quality of the preschool learning environment. The instruments, developed with the support of the Measuring Early Learning and Quality Outcomes (MELQO) Consortium, which includes experts from UNICEF, UNESCO and the Brookings Institution among other notable institutions, measure various aspects related to child development and the quality of learning environments. This is an innovative approach that puts Nicaragua at the forefront of preschool quality monitoring and the assessment of children’s development and learning. 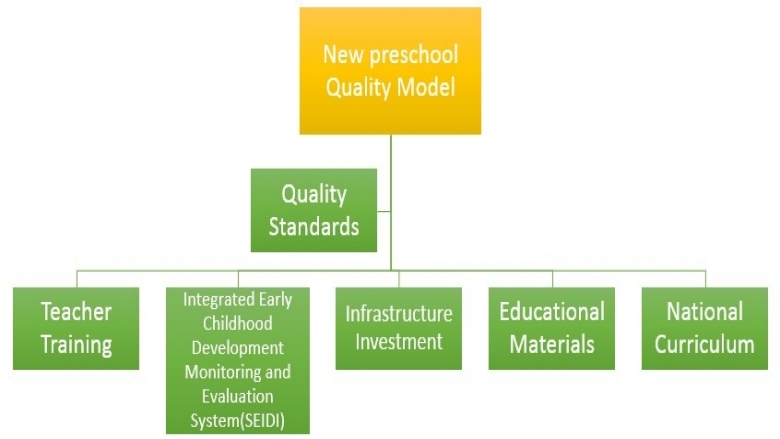 The story of Maria del Carmen Herrera, a preschool teacher in preschool Ruben Dario, in San Dioniso Matagalpa, illustrates the progress made by the government´s support to teacher´s training.

She has 25 years of experience as a preschool community educator, but she is now a professionalized teacher with specialization in preschool education. She now works in the new

preschool that has been rebuilt after an investment supported by the Global Partnership for Education (GPE) through the ESSSP project. This preschool, located 124 km north of Managua, Nicaragua´s capital, was ergonomically designed to meet the needs of children between 3 to 5 years of age. It includes a classroom, sanitary services and playgrounds. Herrera, who has 41 pupils, says that the new preschool has motivated attendance and parent´s commitments to their children´s education.

Results
Although improving early childhood education and reducing the urban/rural gap is still a work in progress, some of the results achieved so far are encouraging. For example, from 2009 to 2016, preschool enrollment in Nicaragua has increased from 53% to 65% among children aged 3 to 5. In addition, the national government’s overall investment has increased by boosting the coverage of school meals for preschool and primary students from 24 to 44% in the period 2009-2014 and expanding access to school kits from 10 to 23% of preschool and primary students.  Furthermore, because of the increased investment in educational materials, teacher training and school infrastructure the National Government yearly per student expenditure in preschool education increased in at least 229% between 2013 and 2014 (Ministry of Hacienda, 2015). Per year preschool per student expenditure was calculated to be US$22.1 in 2013, US$63.7 in 2014 and US$61.2 in 2015 (Codeni, 2017), showing an increasing trend in a three-year period (2013-2015).

We are encouraged by the progress we have seen and we believe that this new preschool model of education will enhance Nicaragua’s future. For this reason, the World Bank’s commitment with the Government of Nicaragua will continue over the next five years on this front with the new Alliance for Education Quality project, which will begin in 2017.

Other articles related to this project