January 1, 2013
Burkina Faso is a low-income, landlocked, Sub-Saharan country with limited natural resources and population estimated at 16 million inhabitants. In spite of recent political instability in its coastal neighbors and trade shocks, Burkina has managed to craft a sound macroeconomic policy framework. In 2010, growth reached 7.9% but contracted to 4.2% in 2011 due to poor yields and terms of trade shocks. The economy was expected to rebound economically in 2012, with a real GDP growth rate projected at 8%. The country’s dominant export is now gold, which has overtaken cotton as the principal source of foreign exchange. In 2012, the country was ranked 150 out of 183 countries in the Doing Business Report compared to 151 in 2011. Burkina’s poverty rate is estimated at 46.7%, and the country ranks 181 out of 187 countries in the United Nations Development Program’s (UNDP) Human Development Index in 2011. On the governance side, Transparency International index was 3 in 2011 for a benchmark of 4.

The vulnerability and lack of diversification of Burkina Faso’s economy, which relies predominantly on the performance of the gold sector and the cotton sector constitute challenges that need to be addressed by the government and development stakeholders. Also, human development and demography challenges should be addressed in order to achieve the development objectives of the newly released Strategy for Accelerated Growth and Sustainable Development (SCADD), which was designed with an ambitious goal of 10% economic growth per year over the five upcoming years. The SCADD has the aim to reduce poverty to 35% between 2011 and 2015 and has four strategic pillars: accelerated growth; human capital development and social protection; improving the governance environment; and cross-cutting priorities including gender, private sector investments and development of growth poles.

Burkina Faso’s development strategy seeks to consolidate the multitude of national and sectoral strategies. The International Development Association’s (IDA) action in Burkina Faso is guided by the 2010 Country Assistance Strategy (CAS), which is aligned with the priorities of the government’s Poverty Reduction Strategy Paper. IDA’s current portfolio in Burkina Faso is composed of 16 national projects representing an engagement of US$928.3 million, including the last Development Policy Operation (DPO) in the series of Growth and Competitiveness Credit, and six regional projects representing an engagement of US$140 million (see Figure 1 for engagement by sector). The portfolio’s overall implementation performance is satisfactory, with average ongoing implementation duration of 4 years.

Since 2000, IDA has helped forge a new aid compact based on poverty reduction strategies, debt relief, better-harmonized aid and government leadership. Nine donors are signatories of a general framework for budget support. The PRSC series is firmly embedded in this process and the Bank has participated in 2009/2010 as leader of the troika of donors in charge of coordinating the joint performance assessment framework. In light with the previous experience in the TROIKA, the Bank has strengthened his follow up of the SCADD throughout the sectors. Indeed, the Bank will lead the policy dialogue in Water and Sanitation, Rural Development, Mining and Energy sectors.

A demonstrated commitment to reforms, political stability and the proven capacity to absorb aid effectively, offer Burkina Faso an opportunity to accelerate progress and achieve transformative results. The SCADD 2011-2015 establishes a target level of economic growth that would ensure a sharp increase in households’ real income and reflect a surge in production of goods and services without hampering national wealth for future generations. IDA has a key role to play in supporting the government in laying out the analytical roadmap for development in the country. The coming Country Assistance Strategy (FY13-16) is seen as an instrument to operationalize Bank support to Burkina. 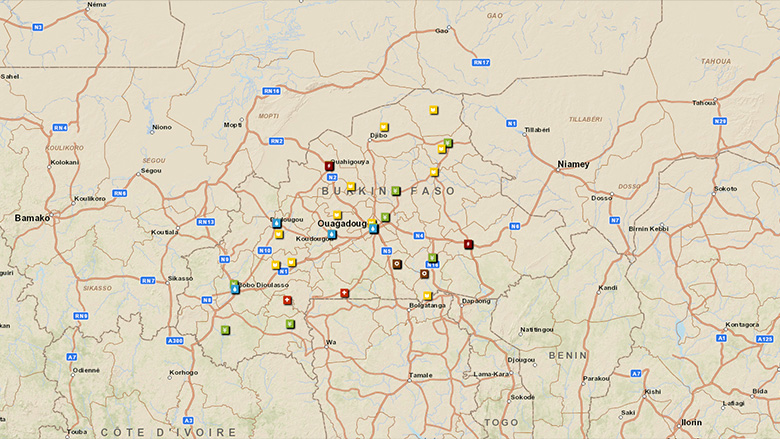