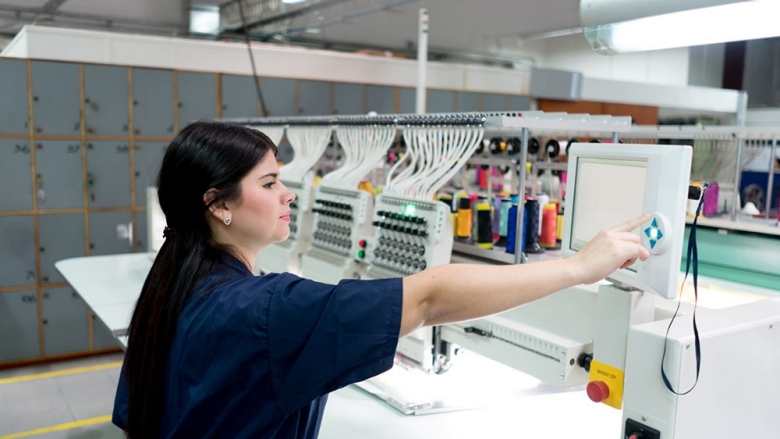 Broad-Based Upturn, but for How Long?

Recent developments: Growth in Latin America and the Caribbean was an estimated 0.9 percent in 2017 after two years of contraction. Stronger-than-expected growth in Brazil was offset by a deeper-than-anticipated recession in República Bolivariana de Venezuela. Private consumption was the main contributor to activity in the region, while shrinking investment detracted from growth for the fourth consecutive year.

Brazil is estimated to have grown 1 percent following a deep two-year-long recession, supported primarily by recovering private consumption. Retail trade and industrial production growth in Brazil has picked up, despite a contraction in construction, while consumer confidence was stable and labor market conditions improved. Argentina recovered from recession and expanded at an estimated 2.7 percent rate, driven by a strong rebound in investment and rising private consumption.

In a number of commodity-reliant countries, weak or contracting production in extractive industries held back growth in 2017. Subdued oil prices and oil field maturation affected Colombia, labor strikes reduced mining output sharply in Chile early in the year, and policy uncertainty was a drag on growth in Chile and Peru. Major floods early in the year set back Peru’s growth.

Mexico expanded by a slightly stronger-than-expected 1.9 percent in 2017. Private consumption was resilient thanks to a healthy labor market, while investment is estimated to have contracted. Hurricane-related infrastructure damage and reduced tourism had a severe economic impact on several Caribbean countries in the second half of the year, and growth for the Caribbean sub-region is estimated to have moderated to 2.3 percent, from 3.3 percent expected in June.

Outlook: Growth in the region is expected to accelerate to 2 percent in 2018 and to 2.6 percent in 2019. Strengthening private consumption and investment, particularly in commodity-exporting countries in the region, are anticipated to enhance growth.

In Brazil, growth is expected to pick up to 2 percent this year, as improving labor conditions and low inflation support private consumption, the residual effects of the downturn fade, and policy conditions become more supportive of investment. Argentina is expected to grow by 3 percent with help from infrastructure investment.

Recovery efforts after floods in early 2017 should drive growth in Peru, which is expected to accelerate to 3.8 percent growth this year. Colombia is expected to move ahead to 2.9 percent growth thanks to private consumption, recovering export growth, and structural reforms to enhance competitiveness. Chile is forecast to advance by 2.4 percent as rising disposable incomes, mining exports, and financial conditions support consumption and investment growth.

Growth in Mexico is forecast to pick up to 2.1 percent in 2018 and 2.6 percent 2019, due to a recovery in investment as uncertainty around the future of the North American Free Trade Agreement and the outcome of July presidential elections fades. Post-hurricane-related reconstruction in the Caribbean should allow growth in the sub-region to recover to 3.5 percent in 2018.

Risks: Growth in the region is subject to considerable downside risks. Policy uncertainty in countries including Brazil, Guatemala, and Peru could hinder growth. Disruptions from natural disasters, negative spillovers from international financial market turbulence or a rise in U.S. trade protectionism, and further deterioration of domestic fiscal conditions could all set back the region’s growth. 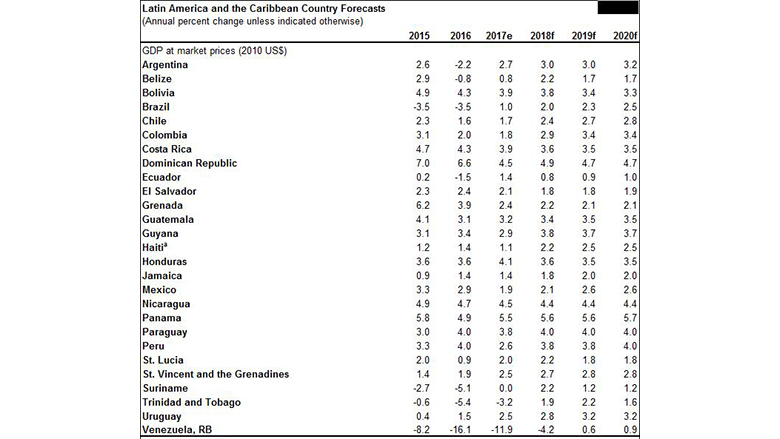 World Bank forecasts are frequently updated based on new information and changing (global) circumstances. Consequently, projections presented here may differ from those contained in other Bank documents, even if basicassessments of countries’ prospects do not significantly differ at any given moment in time.

a. GDP is based on fiscal year, which runs from October to September of next year.