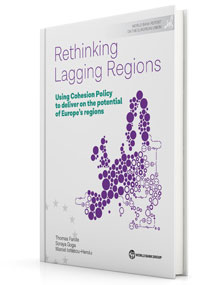 The European Union, since its founding, has been a “convergence machine,” generating wealth and a higher quality of living for the poorest in the 28 EU member states. And while this machine still works, it is not working for everyone.

The Rethinking Lagging Regions report highlights the nature and implications of regional disparities in Europe. There are still examples of great inequalities in wealth, opportunities and productivity across the EU. These are high and likely to keep rising.  Today, the EU’s poorest regions have a GDP per capita that is seven times lower than in the richest areas. The impact of technology on labor markets will exacerbate these trends in the future. While changing demographics and migration patterns provide additional pressures.

Europe’s “lagging regions” include poor “low-income” areas in central and eastern Europe, many of which are converging rapidly, as well as “low-growth” regions in southern Europe that are experiencing stagnant productivity and job destruction.

The report stresses that the EU should use Cohesion Policy to maximize its impact on lagging regions by explicitly targeting regional potential and equality of opportunity rather than convergence. Today, the EU invests €50 billion annually through cohesion funds to support development in European regions.

Finally, the delivery of regional policy needs to engage more deeply on the ground with an even stronger orientation towards the regions as the architects and implementers of their own programs. These programs should be tailored toward the unique challenges and capabilities of the specific region and supported by technical assistance and capacity building at the local level.

It will be critical for policymakers at all levels to reconsider how Cohesion Policy can be effectively prioritized, targeted, and delivered in the next program cycle beginning in 2021 to maximize the impact on lagging regions.