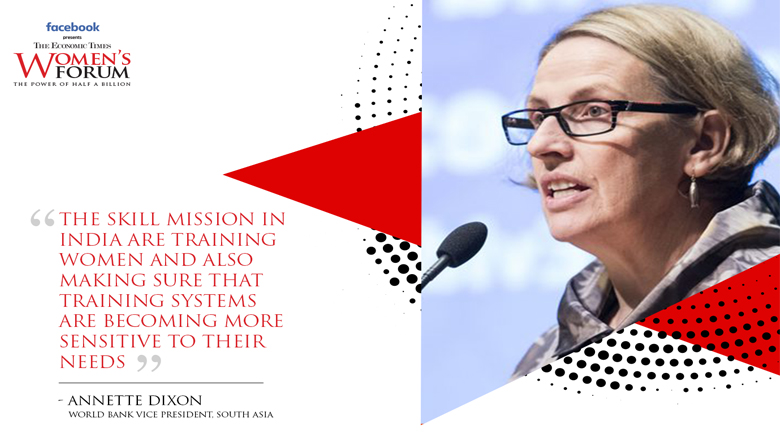 I am delighted to be here today and to have the opportunity to share my thoughts on a very important topic: how India can accelerate its growth through encouraging greater economic participation by women.

An impressive 133 million Indians rose out of poverty between 1994 and 2012, an achievement that India and the world can be proud of. While worthy of celebration, the success could have been even more dramatic if a greater number of women could contribute to the work force.

In 2012, only 27 percent of adult Indian women had a job, or were actively looking for one, compared to 79 percent of men. In fact, almost 20 million women had dropped out of the workforce between 2005 and 2012. This is equivalent to the entire population of Sri Lanka.

Worryingly, India’s rapid urbanization has not yet encouraged more women to join the labor force. Rural jobs have been decreasing and not enough rural women have been able to make the transition to working in urban areas. This makes the need for greater public safety and safe transport more significant. By any measure, the gap is particularly large and has been widening.

India ranks 120 among 131 countries in female labor force participation rates and rates of gender-based violence remain unacceptably high. It’s hard to develop in an inclusive and sustainable way when half of the population is not fully participating in the economy. At 17% of GDP, the economic contribution of Indian women is less than half the global average, and compares unfavorably to the 40% in China, for instance. India could boost its growth by 1.5 percentage points to 9 percent per year if around 50% of women could join the work force.

This is not to say that India has not had some success. Some young women are staying in school longer, and others are choosing to leave work as circumstances change and incomes rise, but India must turn the tide to realize its development potential. What will it take to reverse this trend and embark on the next chapter of India’s success story?

Valuing girls and women is critical factor in making societies more prosperous and my experience of working in other countries shows this. Women’s economic empowerment is highly connected with poverty reduction as women also tend to invest more of their earnings in their children and communities.

For its part, the World Bank ensures that its projects are structured to foster greater economic participation by women. For example, we have invested over $3 billion over the past 15 years to support state governments to empower poor rural women through self-help groups. These projects have supported 45 million poor women access skills, markets and business development services. Some of them have become successful entrepreneurs and inspiration for others. As a result, the evidence shows that these women experience greater food security, better access to finance, and higher incomes that benefit their families and communities.

The Skill India Mission that we are supporting not only provides women relevant skills sought by employers, it also ensures that training programs are sensitive to their needs through helping to provide safe transport, flexible schedules and childcare support. In Jharkhand, the World Bank is investing in adolescent girls to help them complete their secondary education and providing mentoring services for them to succeed in the job market.

However, these projects and interventions alone are insufficient. Research shows that even women that have completed skills programs and get jobs tend to drop out in response to family pressures. Changing social norms around marriage, work and household duties will have to be part of the agenda.

Let’s spark the interest of young girls in subjects like science and mathematics, and convince them that they are just as capable as boys; that they too can build on careers in engineering, scientific research, IT, and fields that are in demand with prospective employers. We must also raise our sons to respect girls and women, and make it clear that there is zero-tolerance for gender-based violence.

In the home, we need families to see their girls as capable future professionals. Household responsibilities can be equitably divided between men and women.

It is an opportune time to revisit and reform outdated legislation and policies that act as deterrents to women entering or staying in the labor market. Fostering the creation of better jobs, providing support for child and elder care, and ensuring mobility to and from work can remove significant structural barriers for women to access employment.

Employers need to walk the talk and commit to supporting diversity in the workplace by hiring women and paying them the same wages as men for similar jobs. We need safe transportation and zero tolerance of sexual harassment in the office. The private sector should take a leading role in expanding women’s share of employment and firm ownership in emerging industries.

We can accelerate progress by working together. Gender-focused planning is more effective when it’s incorporated into everything that we do. Today the World Bank thinks about gender based development in a range of areas and incorporates it in our project design and implementation across different areas.

Last year, I travelled on the Mumbai suburban train from Churchgate to Dadar station. There I met a cross-section of Mumbai’s working women – those with jobs in banking and finance, as well as those carrying baskets of fish for sale. Each woman, in her own way, was an invaluable part of this great big bustling city, contributing to its dynamism and vibrancy.

The women I spoke with appreciated the new trains we had helped introduce, with higher speeds, more comfortable seats and better ventilation systems. But they wanted more to be done to make the trains safer, as well as better connectivity between stations and their often-distant homes. Recognizing these challenges, we are working closely with the Government of Maharashtra to ensure that the next project addresses these concerns with gender-based planning at the core of its design.

I saw the difference a safe working environment can make in encouraging women to work in Tamil Nadu. There, I saw young women working in garment manufacturing, far from their village homes. They had become the main breadwinners for their often-impoverished families. Many girls were now helping family members with education and other expenses. They told me that had they remained at home, their lives would be very different. What helped change the lives of these girls, and turned their families’ fortunes around, was the availability of safe hostel facilities for them nearby.

There are many examples and indications that the government is acting to turn the trend around. Some promising signs are the government’s program for skills development, subsidized loans for businesses led by women, and recent legislation doubling maternity leave, and requiring childcare facilities in companies that employ more than 50 people. If implemented and respected, these policies could remove some of the barriers women face and offer a significant boost to India’s economy.

As the examples and anecdotes show, success will hinge on collaboration between stakeholders, ranging from government ministries, to education providers, to public sector and especially private sector employers down to the actions of each of us.

In the end, Indian women themselves will have to play a key role in claiming a space for themselves in India’s work force. Personally, I will continue to advocate for them. I hope you will join me.

Let’s all pledge together today to increase women’s participation in the work force, and realize a higher level of growth and development for India that is more inclusive and sustainable.