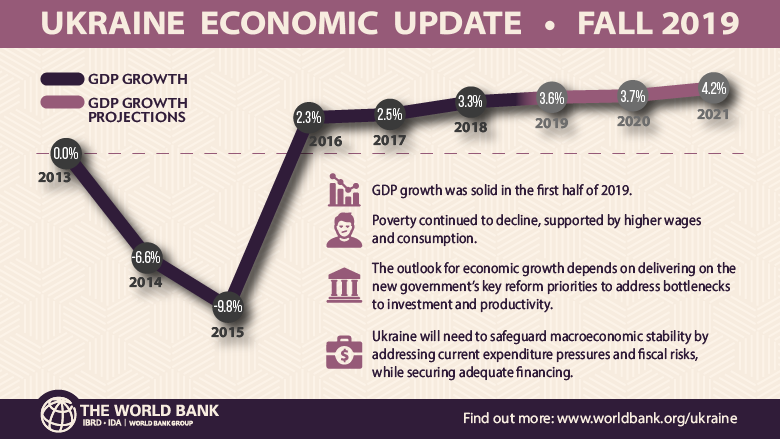 Delivering on the ambitious reform agenda of the new government, including establishing a transparent and efficient market for agricultural land, will help boost economic growth and living standards further for the Ukrainian people

KYIV, November 19, 2019 – Economic growth in Ukraine picked up to 3.6 percent in the first half of 2019 and 4.2 percent in the third quarter driven by a strong agricultural harvest and consumption growth from higher wages, remittances, and a resumption of consumer lending, according to the World Bank’s latest Ukraine Economic Update. At the same time, investment growth has not yet picked up to levels needed for stronger and sustained economic growth.

“Delivering on the ambitious reform agenda of the new government to boost investment and economic growth will help create jobs and improve living standards,” said Satu Kahkonen, World Bank Country Director for Belarus, Moldova and Ukraine. “The key reforms include establishing a transparent and efficient agricultural land market, demonopolizing the gas sector through ownership unbundling of Naftogas, and increasing the efficiency of bank lending to the private sector by reducing non-performing loans in state-owned banks.”

Sound fiscal and monetary management, including efforts to keep current public expenditures under control, are helping reduce public debt, inflation, and interest rates in 2019. Public and publicly guaranteed debt is projected to decline to 52 percent in 2019 from a peak of 81 percent in 2016. Inflation declined to 6.5 percent in October 2019 from 9.8 percent at end-2018, which has allowed the National Bank of Ukraine to reduce the key policy rate to 15.5 percent in October from 18 percent in April.

It will also be important to mobilize adequate external financing to meet significant public debt repayments in 2019-2021.

According to the World Bank’s Special Focus Note, lifting the moratorium on agricultural land sales and establishing a transparent and efficient market for agricultural land has the potential to boost economic growth in Ukraine by 0.5 to 1.5 percent per year over a 5-year period.

Ukraine has the largest endowment of arable land in Europe, but agricultural productivity in Ukraine is a fraction of that in other European countries.

Access to financing for small, credit-constrained farmers will be important to enable them to participate in the market and improve their productivity.  Financing instruments should be effective and sustainable, which means targeting them to small farmers and designing them in a manner that provides incentives to improve productivity and adopt higher value-added crops and new technologies, at an affordable fiscal cost.