Poverty Continues to Decline, but Pace of Poverty Reduction is Slowing in Central Asia

Almaty, October 17, 2019 – Although poverty rates in Central Asia continue to decline overall, the pace of poverty reduction is slowing, according to new data released by the World Bank. High levels of poverty remain in pockets of rural and remote areas, which also suffer from lack of employment opportunities, say new Poverty Outlooks for Central Asian countries, released ahead of International Day for the Eradication of Poverty on 17 October.

“The good news is that Central Asia continues to make progress towards eliminating poverty,” says Lilia Burunciuc, World Bank Country Director for Central Asia “However, poverty reduction is happening much less quickly than before. Rekindling inclusive growth should therefore be among the region’s most urgent priorities.”

Since the 2000s, all Central Asian countries have made significant progress in reducing poverty, but most of this progress occurred in the first few years of that decade. In the eight years from 2002 to 2009, the poverty rate dropped an average of seven percentage points per year in both Tajikistan and the Kyrgyz Republic – down from nearly 70 percent to 25 percent in Tajikistan and to 20 percent in the Kyrgyz Republic. Since then, however, poverty rates have fallen much more slowly: by only one percentage point per year on average in Tajikistan (from 25 percent to a projected 13 percent in 2019), and by nearly zero in the Kyrgyz Republic, stalling at about 20 percent from 2009 through to today.

Poverty in Kazakhstan was already lower in the early 2000s and declined at a rate of four percentage points per year from 2002 to 2009, at which point the country had almost eliminated poverty, as measured by the low-middle-income indicator of $3.20 per day. However, when measured by the upper-middle-income indicator of $5.50 per day, the poverty rate in Kazakhstan reached its lowest point in 2013, at about 6 percent, and since then has remained stuck above 7 percent.

The slowing rate of poverty reduction in Central Asian countries reflects several economic challenges, as well as difficulties securing jobs with decent incomes for vulnerable groups of the population.

Recently published poverty maps for Central Asian countries reveal that many of the remaining poverty hotspots in the region are in rural areas that lack close integration with urban growth centers. This is especially pertinent for parts of Tajikistan and the Kyrgyz Republic, where poverty rates are above 40 percent in the most remote districts.

The analysis also finds that the middle-class in Central Asia is almost entirely concentrated in and around a handful of big cities: Nur-Sultan, Almaty, Tashkent, and to a lesser extent, in Dushanbe and Bishkek. One of the main challenges faced by all countries in the region is ensuring that people are not excluded from these dynamic labor markets.

The World Bank recommends policies that provide greater employment opportunities for people, expanding the availability of affordable housing in growing and prosperous cities, encouraging faster wage growth, and supporting vulnerable groups so they can be more competitive in the labor market. 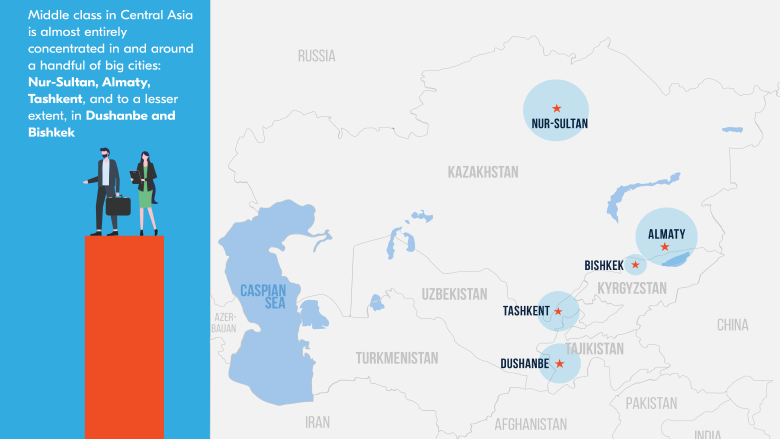 Click the image to open the full version of the infographic.
PRESS RELEASE NO: 2020/ECA/17