Weakening global demand, including from China, and heightened uncertainty around ongoing US-China trade tensions has led to a decline in exports and investment growth, testing the resilience of the region, according to Weathering Growing Risks, the October 2019 edition of the World Bank’s East Asia and Pacific Economic Update, released today.

In Mongolia, growth momentum has continued in the first half of 2019, as GDP rose to 7.3 percent from 6.8 percent in 2018. This robust performance has largely been supported by a strong coal sector and increased private investment. In addition, improved market confidence following the continuous support from multilateral banks as part of a $5.5 billion multi-donor support package, skillful management of the macroeconomy, especially on the fiscal side, and steady progress on structural reforms contributed to the strong performance. In the near to medium term, the country’s growth outlook remains positive. However, the report cautions of the risks including political uncertainty, commodity price shocks, cross-border bottlenecks, implementation delay mega projects and slower implementation of banking sector reforms.

In the region excluding China, consumption growth remained steady, though slightly lower than the same period last year, supported by monetary and fiscal policies. Growth in the smaller economies of the region, however, remained robust, reflecting country-specific circumstances including steady growth in the tourism, real estate, and extractive sectors.

“As growth slows, so does the rate of poverty reduction,” said Victoria Kwakwa, World Bank Vice President for East Asia and the Pacific. “We now estimate that almost a quarter of the population of developing East Asia and the Pacific lives below the upper-middle-income poverty line of US$5.50 a day. This includes nearly 7 million more people than we projected in April, when regional growth was looking more robust.”

The report makes clear that increasing trade tensions pose a long-term threat to regional growth.  While some countries have hoped to benefit from a reconfiguration of the global trade landscape, the inflexibility of global value chains limits the upside for countries in the region in the near term.

The report warns that downside risks to the region’s growth prospects have intensified. Prolonged trade tensions between China and the United States would continue to hurt investment growth, given high levels of uncertainty. A faster-than-expected slowdown in China, the Euro Area and the United States, as well as a disorderly Brexit, could further weaken the external demand for the region’s exports.

High and rising debt levels in some countries are also putting limits on their abilities to use fiscal and monetary policies to ease the impacts of the slowdown. In addition, any abrupt changes in global financial conditions could translate into higher borrowing costs for the region, dampening credit growth and further weighing on private investment and economic growth in the region.

To weather growing risks, the report recommends that countries with sufficient policy space use fiscal and/or monetary measures to help stimulate their economies, while guarding fiscal and debt sustainability. Countries in the region will also benefit from staying the course on trade openness and by deepening regional trade integration.

The ongoing US-China trade dispute, along with slowing global growth, also increase the need for countries in the region to undertake reforms to improve their productivity and boost growth. This includes regulatory reforms that improve the trade and investment climate to attract investment and facilitate the movement of goods, technology, and know-how. 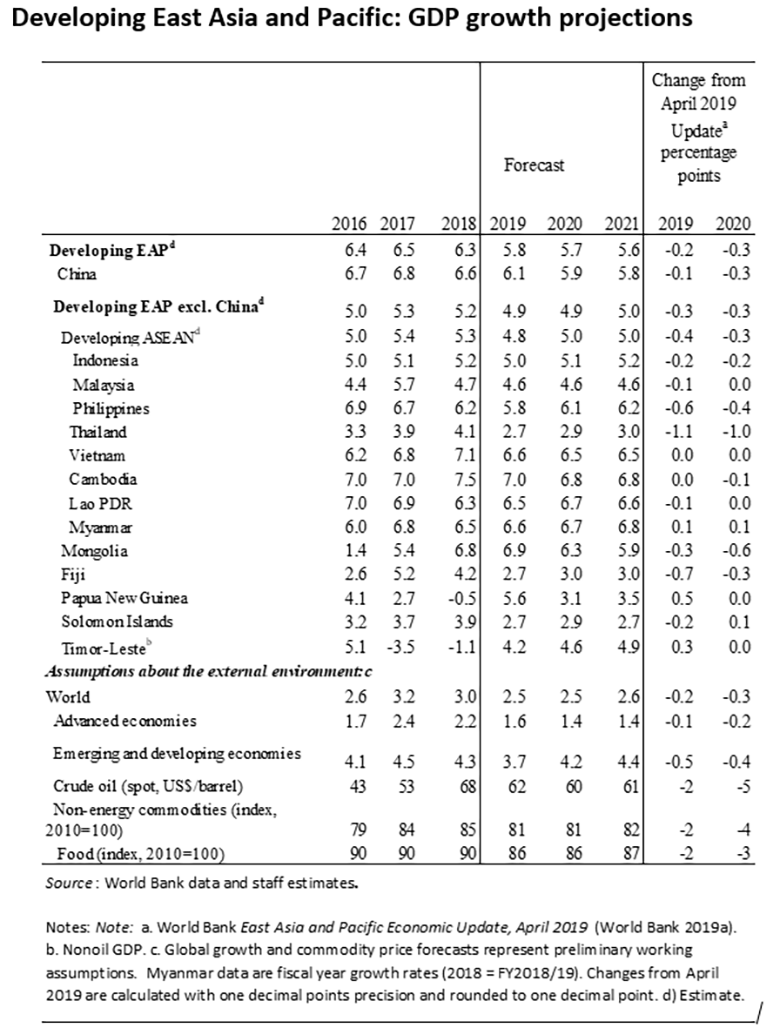