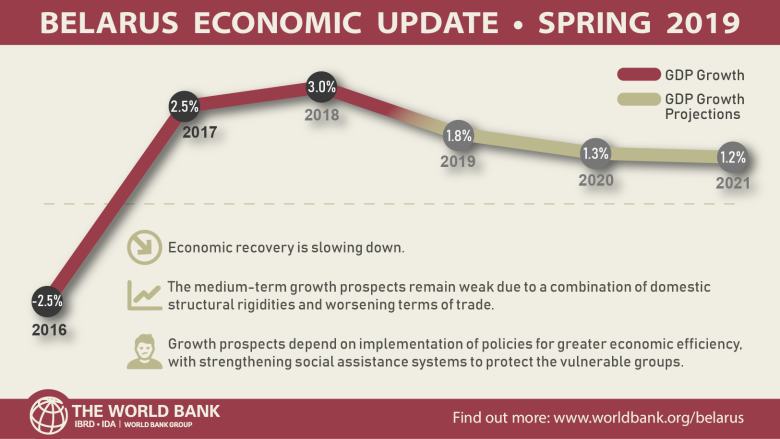 MINSK, June 5, 2019 – Belarus’ economic recovery is slowing down, reflecting low productivity growth and a worsening external environment, says the World Bank’s latest Economic Update for Belarus, released today in Minsk. The outlook for the medium-term remains weak, due to a combination of domestic structural rigidities and stagnating traditional markets for manufacturing and agricultural exports.

Although macroeconomic indicators, such as inflation and the current account deficit, have improved from previous years, rising public debt, largely in foreign currency, and the uncertainty about Russia’s “tax maneuver” and bilateral trade relations pose risks to economic development.

“It is essential to strengthen competitiveness and, thus, export more products to a wider range of countries,” said Alex Kremer, World Bank Country Manager for Belarus. “Further improving the business environment and intensifying the restructuring of companies, especially state-owned companies, would help producers innovate and export more. Otherwise, the only way to address public debt is to cut government spending and raise taxes.”

The Update emphasizes the need to strengthen social safety nets that protect the most vulnerable, uphold living standards, prevent a rise in poverty, and help people with job mobility. A key recommendation of the report is the need to increase the share of expenditure on social assistance that targets low-income groups in the population.

“Belarus achieved remarkable progress in poverty reduction during its ‘high-growth’ period of 2003-2013. But with growth set to slow in the long-run, social resilience and poverty prevention are more important than ever,” said Nithin Umapathi, Senior Economist at the World Bank. “One of the weaknesses of the existing safety net is that many poor working households are not benefiting from current means-tested support programs. This can be tackled by expanding the coverage and generosity of the monthly Targeted Social Assistance Program (GASP).”