Oil prices to be lower in 2019 on slower-than-expected global growth, rising non-OPEC supply

Metal, agriculture prices to stage partial recovery, momentum to pick up in 2020

WASHINGTON, April 23 – Crude oil prices are expected to average $66 a barrel in 2019 and $65 a barrel in 2020, a downward revision from the October forecast due to the weaker-than-expected global growth outlook and greater-than-anticipated U.S. production, the World Bank said.

Metal prices are expected to continue a recovery in 2019 that follows a sharp drop in the second half of 2018, the World Bank said in its April Commodity Markets Outlook. The recovery has been spurred by stabilization of activity in China after weakness around the turn of the year, as well as various supply shortfalls.

“It has become clear that the commodity price cycle has come to an end, which is causing strains for exporters but may offer opportunities for importers,” said Ceyla Pazarbasioglu, World Bank Equitable Growth, Finance & Institutions Vice President. “Exporters may have to adapt to slower gains in commodity revenues with economic diversification, while importers could take advantage of lower commodity prices for increased investment.”

Agriculture prices are projected to fall 2.6 percent this year but rebound in 2020 due to lower crop production and higher costs for energy and fertilizers. An escalation of trade tensions would likely push prices lower, but higher-than-expected energy costs could lift prices more than expected.

“The outlook for commodity prices is sensitive to policy-related risks, especially for oil,” said Ayhan Kose, Director of the World Bank’s Prospects Group. “The outlook for oil could be swayed by a range of policy outcomes, including whether the Organization of the Petroleum Exporting Countries (OPEC) and partners extend production cuts, the impact of the removal of waivers to the U.S. sanctions on Iran, and looming changes in marine fuel emissions regulations.”

After a drop in late 2018, oil prices have risen steadily since the start of the year, as OPEC and partners have cut production, and output has declined in Venezuela and Iran. U.S. shale production is expected to remain robust after surging in 2018. Energy prices overall – which also include natural gas and coal ‒ are expected to average 5.4 percent lower in 2019 than in 2018.

A special focus section shows that when countries intervene to dampen the effect of food price fluctuations on their citizens, the collective intervention of many countries can produce the opposite of the intended effect and amplify movements in world prices – to the detriment of the most vulnerable populations. 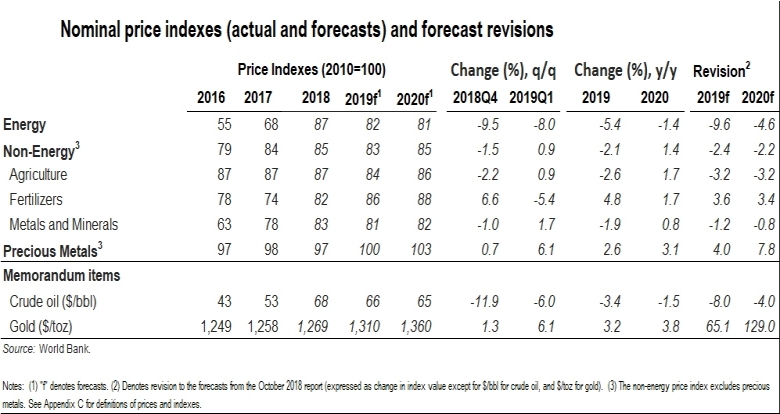