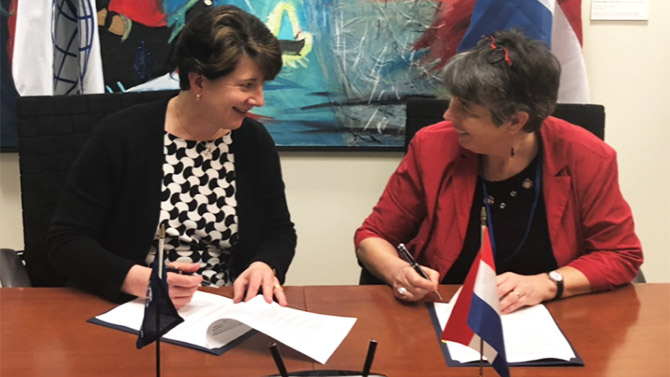 WASHINGTON DC, APRIL 11th, 2019.- Senior representatives of the Kingdom of the Netherlands and the World Bank today signed an agreement for USD 7,000,000 to support developing countries’ efforts in mobilizing much-needed public domestic resources to achieve the Sustainable Development Goals, particularly in Africa and the Middle East.

The four-year agreement aims at boosting domestic resource mobilization while strengthening tax policy and administrative capacity in selected countries in North, Western, and Central Africa, as well as in the Middle-East. Some countries that may benefit from this agreement include: Benin, Burkina Faso, Chad, Côte D'Ivoire, Ghana, Liberia, Niger, Nigeria, Senegal, Ethiopia, Kenya, Iraq, Jordan, and Lebanon.

“This agreement with the World Bank represents the commitment of the Netherlands to helping countries expand their tax bases so they can generate and mobilize much-needed domestic resources to meet their development priorities,” said Mrs. Reina Buijs, Vice-Minister for Foreign Trade and Development Cooperation, who signed the agreement.

Despite significant progress, many countries in Africa and the Middle East still face important challenges to increase their tax-to-GDP ratio above 15%, which is considered the minimum required to enable economic growth and poverty reduction.

Some of these challenges include: a large informal sector; limited tax collection from property; narrow tax bases in resource-rich countries; high reliance on trade taxes or a small number of large taxpayers; weak tax agencies unable to design and implement sound tax policies or to counter tax evasion and avoidance; and abusive or corrupt administrative practices. For countries with higher tax-to-GDP ratios, key issues also include tax equity and impact on business climate and private sector development.

“We greatly appreciate the generosity of the Netherlands in supporting the mobilization of domestic resources, which is a critical component of our maximizing finance for development agenda,” said Mrs. Deborah Wetzel, Senior Director of the Governance Global Practice, who also signed the agreement. “This agreement will support countries in overcoming major challenges through the design and implementation of tailored and comprehensive policy and administrative reforms, along with country-specific capacity building and technical assistance.”

The agreement signed with the Netherlands is part of the support to the World Bank’s Global Tax Program, which was launched in September 2017 and is financed by a multi-donor trust fund. The GTP covers tax-related activities across the World Bank’s portfolio and aims to enhance opportunities for coordination with other relevant stakeholders, including donors, civil society, and academic or research institutions.

The program approaches the strengthening of domestic resource mobilization not just from a raising revenue angle, but also from the design of tax systems that promote inclusiveness, encourages good governance, matches society’s views about appropriate income and wealth equity, and promotes social justice.

Currently eight donor partners (Australia, Denmark, Japan, Luxembourg, the Netherlands, Norway, Switzerland and United Kingdom) contribute to the GTP. The program’s total budget for fiscal years 2018-2022 is at US$ 47.5 million, which includes a total contribution of US$10 million from the Netherlands.