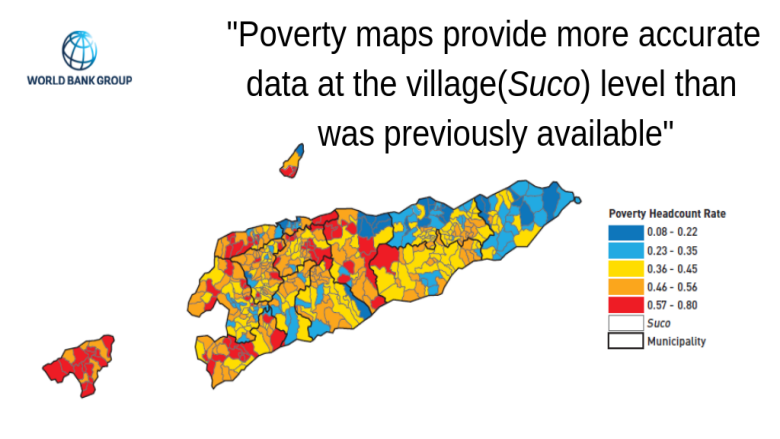 DILI, March 27, 2019 - Policy makers now have access to powerful visual tools to identify areas of poverty and gender disparity with greater accuracy. The Gender-Sensitive Insight of Poverty Mapping for Timor-Leste is a new set of poverty statistics that will enable governments, civil society and development partners to pinpoint areas where development outcomes are lagging.

Using data from the 2014 Survey of Living Standards, the 2015 Census, and the 2016 Demographic and Health Survey, the report has identified, for the first time, areas of extreme poverty and gender disparity all the way to the village level.

“Timor-Leste has made impressive progress in reducing national poverty levels,” said Macmillan Anyanwu, World Bank Country Representative for Timor-Leste. “Geographically, however, this progress has been highly uneven across the country. These maps capture areas of poverty at the village level and highlight gender gaps based on access to economic activities, education, health, and power and agency. We are pleased that the Government of Timor-Leste has set a goal of eradicating extreme poverty by introducing more socially inclusive and gender-sensitive policies and programs.”

The Poverty Maps reveal that there is a wider variation in poverty rates within districts than was previously known. For example, while the overall Dili district level poverty rate is 29 percent, the rate for local villages within Dili ranges from 8 to 80 percent. On gender issues, the report finds that female disadvantages in education and levels of domestic violence against women are higher in poorer areas of Timor-Leste.

The report is the result of close collaboration between the World Bank and the General Directorate of Statistics Timor-Leste and funded by the Umbrella Facility for Gender Equality, a multi-donor trust fund dedicated to gender informed policy making.