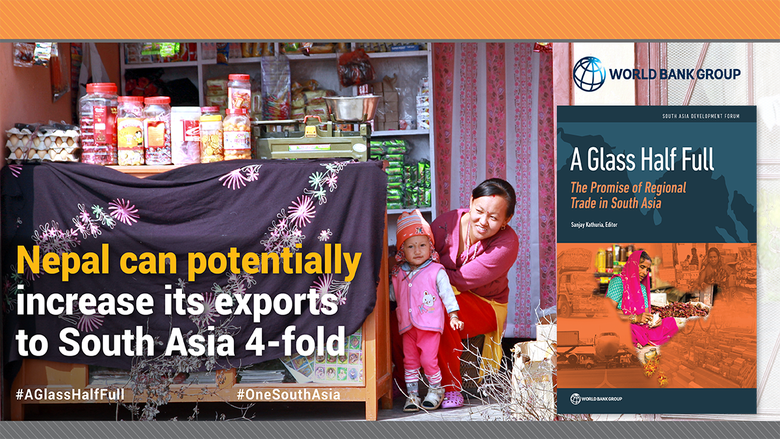 KATHMANDU, December 14, 2018 – Nepal has the potential to increase exports to South Asian countries four-fold. Man-made trade barriers have held back intraregional trade in South Asia. If these barriers were reduced, intraregional trade could grow from its current value of $23 billion to $67 billion, says a new World Bank report.

The report, ‘A Glass Half Full: The Promise of Regional Trade in South Asia’ was launched in Kathmandu at a public event hosted by the World Bank in partnership with the South Asia Watch on Trade, Economics and Environment (SAWTEE). Intraregional trade in South Asia remains one of the lowest in the world and accounts for about 5 percent of the region’s total trade, compared with 50 percent in East Asia and the Pacific, the report highlights. Nepal mostly exports to South Asia and has a trade deficit of $10.8 billion which is equivalent to 37 percent of its GDP.

The report also assesses the gap between current and potential trade in South Asia and provides a roadmap for deepening regional trade. It identifies four critical barriers to regional trade: tariffs and para tariffs, real and perceived non­tariff barriers, connectivity costs, and a broader trust deficit.

“Situated in the world’s fastest growing region, Nepal’s potential to expand trade in goods and services is promising,” said Faris Hadad-Zervos, World Bank Country Manager for Nepal. “Addressing its own protectionist policies will help Nepal significantly increase its exports not only to South Asia, but also to the rest of the world.”

South Asian countries impose greater trade barriers for imports from within the region than from the rest of the world. More than one-third of intraregional trade falls under sen­sitive lists, which are goods that are not offered concessional tariffs under the South Asian Free Trade Area (SAFTA). More than 36 percent of Nepal’s imports from South Asia are under sensitive lists, more than any other country in the region.

The report recommends targeting sensitive lists and para tariffs to enable real progress on SAFTA and calls for a multi-pronged effort to address non-tariff barriers, focusing on information flows, procedures, and infrastructure.

The report suggests that policy makers in South Asia may draw lessons from the India-Sri Lanka air services liberalization experience, where liberalization was gradual and incremental, but policy persistence paid off. Today, there are 147 flights per week between Colombo and at least 14 cities in India.