Oil prices are forecast to average $74 a barrel over 2019, only marginally up from a projected average of $72 a barrel in 2018, while metals prices are expected to remain broadly stable in 2019, the World Bank said in its October Commodity Markets Outlook.

Prices for energy commodities – which include oil, natural gas, and coal -- are forecast to average 33.3 percent higher in 2018 than the previous year but to broadly stabilize in 2019, the World Bank said. U.S. oil production growth is expected to be robust whereas oil production losses are expected in Iran and Venezuela. Global demand is expected to hold steady.

Prices for agricultural commodities, including food commodities and raw materials, are anticipated to decline marginally in 2018 amid ample supply and trade tensions before rising 1.6 percent in 2019.

The metals index is expected to rise 5.4 percent this year and decline modestly in 2019. Prices could drop more than expected if global trade frictions intensify.

“Further escalation of trade restrictions between major economies could lead to large economic losses and cascading trade costs through global value chains,” said Shanta Devarajan, World Bank Senior Director for Development Economics and acting Chief Economist. “Any setbacks to growth in major economies would have significant negative repercussions for the rest of the world through trade, confidence, financial, and commodity-market channels.”

The imposition of both commodity-specific and broad-based tariffs this year has reduced and diverted trade flows; amplified price differentials between some countries among some commodities including soybeans, steel and aluminum; and more generally led to concerns about weaker global trade and growth prospects, the World Bank said in the report.

“The outlook for commodity prices is highly uncertain given a number of policy-related risks, which include the possibility of additional tariffs or sanctions,” said Ayhan Kose, director of the World Bank’s Development Economics Prospects Group. “In addition, demand for industrial commodities is likely to soften in coming years. A large number of emerging market and developing economies depend on raw materials for government and export revenues and should therefore be strengthening policy frameworks and rebuilding fiscal buffers.”

A special focus section examines changing patterns of demand for industrial commodities – energy and metals – and their implications for developing economies. Over the past 20 years, demand for commodities has surged in large part due to demand from China. As China’s economy matures and shifts toward less commodity-intensive activities, energy and metal demand growth is likely to slow.

“Slower growth in commodity consumption would likely dampen prices,” said John Baffes, Senior Economist and lead author of the Commodity Markets Outlook. “Further, other factors, such as advances in technology, shifts in consumer preferences, environmental concerns, and policies to encourage cleaner fuels could lead to sharper declines in global use of some commodities than current trends indicate.” 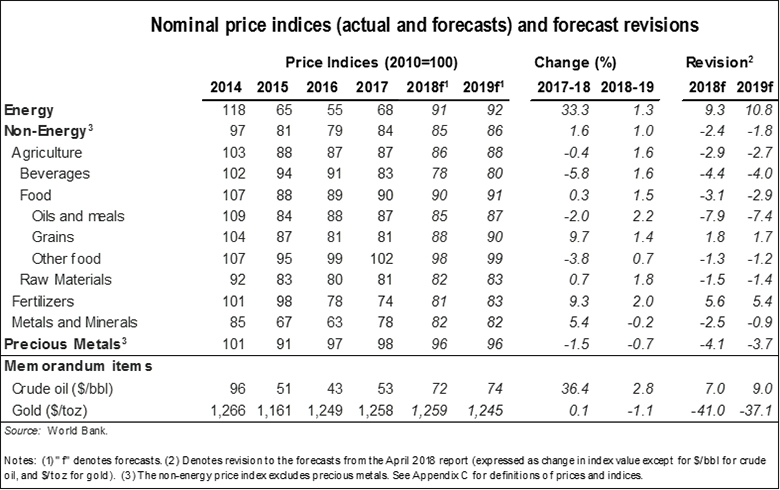