Global Economy to Expand by 3.1 percent in 2018, Slower Growth Seen Ahead

WASHINGTON, June 5, 2018—Despite recent softening, global economic growth will remain robust at 3.1 percent in 2018 before slowing gradually over the next two years, as advanced-economy growth decelerates and the recovery in major commodity-exporting emerging market and developing economies levels off, the World Bank said on Tuesday.

“If it can be sustained, the robust economic growth that we have seen this year could help lift millions out of poverty, particularly in the fast-growing economies of South Asia,” World Bank Group President Jim Yong Kim said. “But growth alone won’t be enough to address pockets of extreme poverty in other parts of the world. Policymakers need to focus on ways to support growth over the longer run—by boosting productivity and labor force participation—in order to accelerate progress toward ending poverty and boosting shared prosperity.”

Activity in advanced economies is expected to grow 2.2 percent in 2018 before easing to a 2 percent rate of expansion next year, as central banks gradually remove monetary stimulus, the June 2018 Global Economic Prospects says. Growth in emerging market and developing economies overall is projected to strengthen to 4.5 percent in 2018, before reaching 4.7 percent in 2019 as the recovery in commodity exporters matures and commodity prices level off following this year’s increase.

This outlook is subject to considerable downside risks. The possibility of disorderly financial market volatility has increased, and the vulnerability of some emerging market and developing economies to such disruption has risen. Trade protectionist sentiment has also mounted, while policy uncertainty and geopolitical risks remain elevated.

A Special Focus cautions that, over the long run, the anticipated slowdown in global commodity demand could put a cap on commodity price prospects and thus on future growth in commodity-exporting countries. Major emerging markets have accounted for a substantial share of the increase in global consumption of metals and energy over the past two decades, but growth of their demand for most commodities is expected to decelerate, the Special Focus section says.

“The projected decline in commodities’ consumption growth over the long run could create challenges for the two-thirds of developing countries that depend on commodity exports for revenues,” said World Bank Senior Director for Development Economics, Shantayanan Devarajan. “This reinforces the need for economic diversification and for strengthening fiscal and monetary frameworks.”

After many years of downgrades, consensus forecasts for long-term growth have stabilized, a possible signal the global economy is finally emerging from the shadow of the financial crisis a decade ago. However, long-term consensus forecasts are historically overly optimistic and may have overlooked weakening potential growth and structural drags on economic activity, the report cautions.

Europe and Central Asia: Growth in the region is projected to moderate to an upwardly revised 3.2 percent in 2018 and edge down to 3.1 percent in 2019 as a modest recovery among commodity exporting economies is only partially offset by a slowdown among commodity importers. In Turkey, growth is forecast to slow to 4.5 percent in 2018 and to 4.0 percent in 2019 as delays in fiscal consolidation and the extension of the credit support program temper an anticipated slowdown following the strong recovery last year. Growth in Russia is anticipated to hold steady at a 1.5 percent rate this year and accelerate to 1.8 percent next year as the effects of rising oil prices and monetary policy easing are offset by oil production cuts and uncertainty around economic sanctions.

Latin America and the Caribbean: Growth in the region is projected to accelerate to a downwardly revised 1.7 percent in 2018 and to 2.3 percent in 2019, spurred by private consumption and investment. The cyclical recovery underway in Brazil is projected to continue, with growth forecast to be 2.4 percent this year and 2.5 percent in 2019. In Mexico, growth is expected to strengthen moderately to 2.3 percent in 2018 and 2.5 percent in 2019 as investment picks up. Growth in Argentina is anticipated to slow to 1.7 percent this year as monetary and fiscal tightening and the effects of the drought dampen growth, and to remain subdued next year, at 1.8 percent. Growth in some Central American agricultural exporters is expected to pick up in 2018 and 2019, while growth among the commodity importers of that sub-region is expected to stabilize or slow. Economies of the Caribbean are forecast to see a lift to growth in 2018 from post-hurricane reconstruction, tourism, and supportive commodity prices.

Sub-Saharan Africa: Growth in the region is projected to strengthen to 3.1 percent in 2018 and to 3.5 percent in 2019, below its long-term average. Nigeria is anticipated to grow by 2.1 percent this year, as non-oil sector growth remains subdued due to low investment, and at a 2.2 percent pace next year. Angola is expected to grow by 1.7 percent in 2018 and 2.2 percent in 2019, reflecting an increased availability of foreign exchange due to higher oil prices, rising natural gas production, and improved business sentiment. South Africa is forecast to expand 1.4 percent in 2018 and 1.8 percent in 2019 as a pickup in business and consumer confidence supports stronger growth in investment and consumption expenditures. Rising mining output and stable metals prices are anticipated to boost activity in metals exporters. Growth in non-resource-intensive countries is expected to remain robust, supported by improving agricultural conditions and infrastructure investment 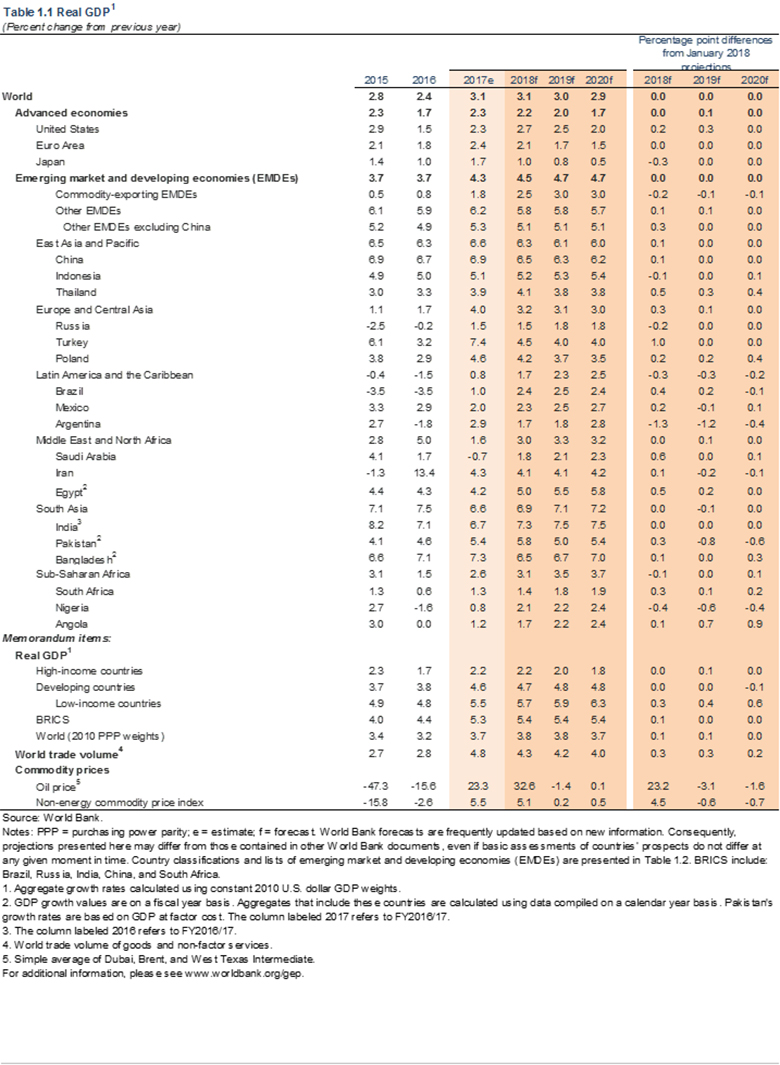