Commodity prices to rise more than expected in 2018: World Bank

Oil prices to average $65 a barrel in 2018 on strong demand, producer restraint

WASHINGTON, April 24 - Oil prices are forecast to average $65 a barrel over 2018, up from an average of $53 a barrel in 2017, on strong demand from consumers and restraint by oil producers, while metals prices are expected to rise 9 percent this year, also on a pickup in demand and supply constraints, the World Bank said on Tuesday.

Prices for energy commodities – which include oil, natural gas, and coal -- are forecast to jump 20 percent in 2018, a 16 percentage point upward revision from October’s outlook, the World Bank said in its April Commodity Markets Outlook. The metals index is expected to rise as an 9 percent drop in iron ore prices is offset by increases in all base metals prices, led by nickel, which is forecast to rise 30 percent.

Agricultural commodities, including food commodities and raw materials, are anticipated to see a price rise of over 2 percent this year on diminished planting prospects. Weather disruptions are expected to be minimal.

“Accelerating global growth and rising demand are important factors behind broad-based price increases for most commodities and the forecast of higher commodities prices ahead,” said Shantayanan Devarajan, World Bank Senior Director for Development Economics and acting Chief Economist. “At the same time, policy actions currently under discussion add uncertainty to the outlook.”

Oil prices are expected to average $65/bbl over 2019 as well. Although prices are projected to decline from April 2018 levels, they should be supported by continued production restraint by OPEC and non-OPEC producers and strong demand. Upside risks to the forecast include constraints to U.S. shale oil output, geopolitical risks in several producing countries, and concerns the United States may not waive sanctions against Iran.  Downside risks include weaker compliance with the oil producers’ agreement to restrain output or outright termination of the accord, rising output from Libya and Nigeria, and a quicker-than-expected rise in shale oil output.

“Oil prices have more than doubled since bottoming in early 2016, as the large overhang of inventories has been reduced significantly.” said John Baffes, Senior Economist and lead author of the Commodity Markets Outlook. “Strong oil demand and greater compliance by the OPEC and non-OPEC producers with their agreed output pledges helped tip the market into deficit.”

Upside risks to the metals price forecast include more robust global demand than expected. Supply could be held back by slow incorporation of new capacity, trade sanctions against metals exporters, and policy actions in China. Downside risks include slower-than-expected growth in major emerging markets, the restart of idle capacity, and an easing of pollution-related policies in China. Precious metals are expected to climb 3 percent this year in anticipation of U.S. interest rate increases and higher inflation expectations.

Grains and oils and meal prices are expected to rise in 2018, mostly due to lower planting intentions.  The mild La Niña cycle that extended into the early part of the year only affected banana production in Central America and soybean production in Argentina and did not impact global markets for those crops substantially. The possible introduction by China of countervailing duties in response to U.S. tariff increases could impact the soybean market. 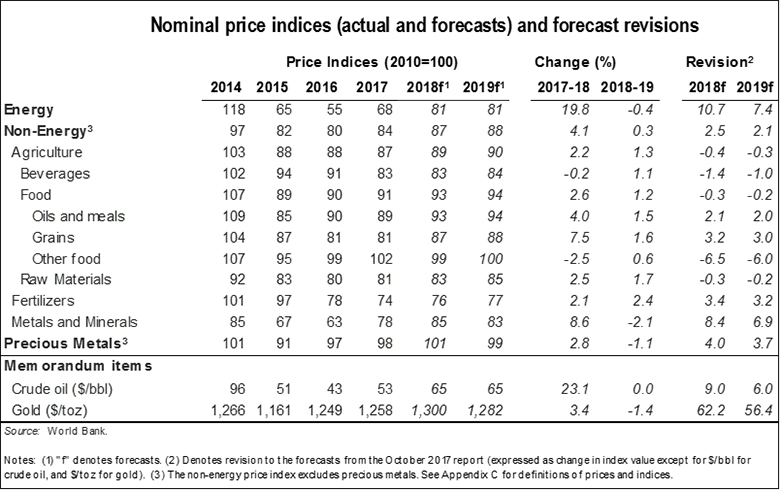