Project Signing: Government of India and the World Bank Sign a New Project to Benefit Over 25 Million Small and Marginal Farmers in Maharashtra 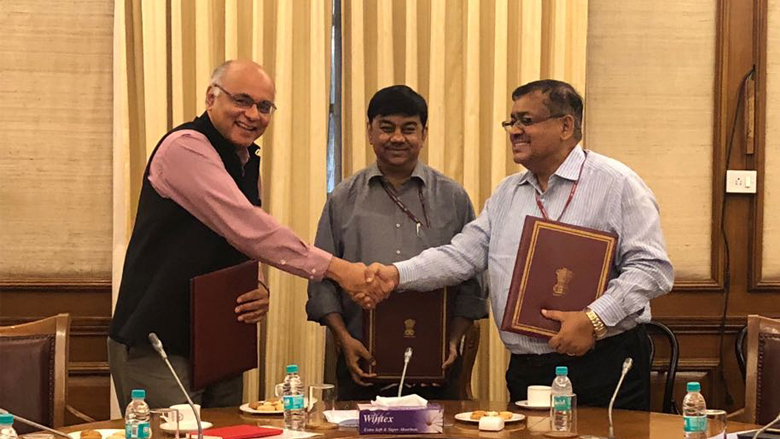 New Delhi, April 6, 2018 – The Government of India, Government of Maharashtra and the World Bank today signed a US$ 420 million project to help small and marginal farmers in the Marathwada and Vidarbha regions of Maharashtra, increase climate resilient practices in agriculture and ensure that farming continues to remain a financially viable activity for them.

The project is expected to benefit over 7 million people spread over an area of 3.0 million ha and cover 5,142 villages across 15 most climate vulnerable districts of the region.

"Government of India accords high priority to welfare of farmers and is implementing several schemes to revitalize the agriculture sector and improve the economic condition of farmers,” said Sameer Kumar Khare, Joint Secretary, Department of Economic Affairs, Ministry of Finance.  “To cope with climate change, agricultural systems must be resilient and adapt to change. The project will strengthen the resilience of small and marginal farmers against adverse climate events by promoting agricultural technologies and farming practices that are aimed at improving soil health, water-use efficiency and crop productivity.”

The Maharashtra Project for Climate Resilient Agriculture will be implemented in rural areas largely dependent upon rainfed agriculture. The project will take up a series of activities at the farm and watershed level. It will scale up climate-resilient technologies such as micro irrigation systems, expand surface water storage, and facilitate aquifer recharge, which is expected to directly contribute to a more efficient use of scarce water resources. By adopting climate-resilient seed varieties which have short maturity, are drought and heat resistant, and salt tolerant, the project will help reduce risks of climate-related crop failure, and help enhance farmer’s income.

In recent years, climate variability has affected agriculture in Maharashtra, where farming is largely dominated by small and marginal farmers. Farmers have low crop productivity and a high dependence on rainfall. Severe drought in the past has affected the state’s agriculture performance.

“For India to sustain its growth across generations and become one of the world’s largest middle-class economies, the country needs to shift to a more resource-efficient growth path, which is inclusive. This project will help the rural poor, largely dependent on rain-fed agriculture, use more climate-resilient farming technologies and conserve water, a scarce resource,” said Junaid Ahmad, World Bank Country Director in India. “The project will also support the state government to shift towards a new paradigm that puts climate resilience at the core of agricultural growth and rural development in Maharashtra,” he added.

At the watershed level, project activities include building drainage lines and preparing catchment area treatment plans that promote a more efficient use of surface water for agriculture, complemented with a more sustainable use of groundwater, which will ultimately improve the availability and quality of water at the farm level.

To strengthen emerging value chains for climate-resilient agricultural commodities, the project will improve the capacity of Farmer Producers Organizations to operate as sustainable, market-oriented, agri-enterprises. It will help mainstream the climate resilient agriculture agenda in various local institutions that deliver agricultural services to the farming community.

“The state climate modelling results show that the annual mean temperature in the project area will increase by around 1.3 to 1.5 degree Celsius by the 2030s. The increase in rainfall during this period is also likely to get distributed over a shorter number of rain days. The Government of Maharashtra recognizes the need for a structural shift to make agriculture more sustainable and is keen to build climate resilience in agriculture which this project will support the government in achieving,” said Patrick Verissimo, Lead Agriculture Economist and Ranjan Samantray, Senior Agriculture Specialist and World Bank’s Task Team Leaders for the project

India’s per capita emission of Green House Gases (GHG) is also on the rise, though current per capita levels of 2.44 tCO2 equivalent in 2012, is still among the lowest in the world. In absolute terms, the agriculture sector is the second largest contributor with around 18 percent of the country’s total GHG emissions. This project will help mitigate that through carbon sequestration which involves planting trees in upper catchment areas and afforestation; growing fruit trees on small orchards; and incorporating crop residues (biomass) into the soil.

The $420 million loan from the International Bank for Reconstruction and Development (IBRD), has a 6-year grace period, and a maturity of 24 years.