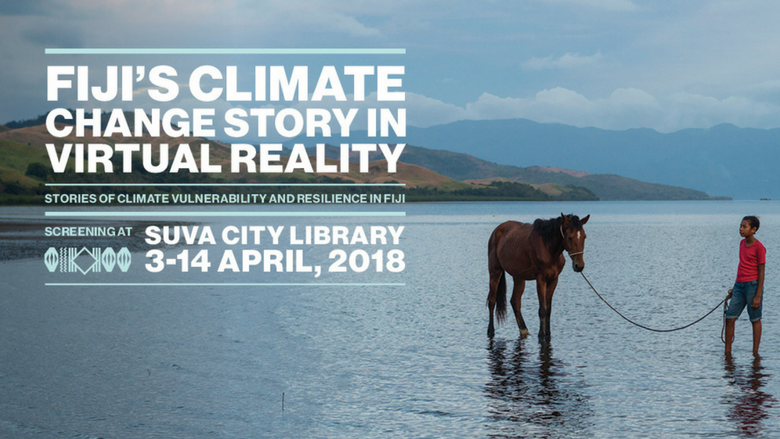 SUVA, March 28, 2018 – The Virtual Reality climate change film project that has shared Fiji’s climate change story with the world is set to make its return home to Fiji next week.

Our Home, Our People (www.ourhomeourpeople.com) will be presented at the Suva City Library between 3-14 April, and will be launched by the Prime Minister, following the film’s launch at COP23 in November.

The VR film project was produced in the communities of Vunisavisavi (Cakaudrove, Vanua Levu), Namarai and Nabukadra, as well as Bayly Memorial School, Barotu (Ra Province, Viti Levu), and was a key part of the Fiji Pavilion at COP23.

It has already been seen by more than 600,000 people worldwide, including many global leaders at COP23, and was recently named as a finalist in the United Nations’ Sustainable Development Goals (SDGs) Action Awards.

“This is truly a uniquely Fijian story, told through the powerful, moving format of 360-degree Virtual Reality (VR),” said Lasse Melgaard, the World Bank’s Resident Representative for the South Pacific.

“We are incredibly grateful to the communities of Ra and Vunisavisavi, who shared their lives with our team for this story, and we are so pleased to be able to finally bring their story ‘home’ to Fiji – to allow thousands more people to experience this powerful, moving story in its true 360-degree format.”

The ‘return tour’ will also include a series of community events to be held at the communities whose stories are featured in the film, including Nabukadra and Naramai (Ra Province).

The project was funded by the World Bank’s Global Facility for Disaster Reduction and Recovery and the ACP-EU Natural Disaster Risk Reduction Program, and was launched in partnership with the Climate Vulnerability Assessment: Making Fiji Climate Resilient, a report launched by the Attorney-General and Minister Responsible for Climate Change, the Hon. Aiyaz Sayed-Khaiyum.

The report, prepared in line with Fiji’s National Development Plan, examined the economic and social impacts of climate change on Fiji over the coming decades, and provides a set of recommendations as to the most effective investments to adapt and minimize its impacts.