New Delhi November 20, 2017 – The Government of India and the World Bank today signed a US$98 million Loan Agreement and US$2 million Grant Agreement to help India increase its power generation capacity through cleaner, renewable energy sources.

The Shared Infrastructure for Solar Parks Project will finance the Indian Renewable Energy Development Agency Limited (IREDA), to provide sub-loans to select states to invest in various solar parks, mostly under the Ministry of New and Renewable Energy’s (MNRE) Solar Park Scheme.  The first two solar parks to be supported under the project are in the Rewa and Mandsaur districts of Madhya Pradesh, with targeted installed capacities of 750 MW and 250 MW, respectively. In addition, other states where potential solar parks could be supported under this project are in Odisha, Chhattisgarh, and Haryana.

“The Government of India is committed to set-up an enabling environment for solar technology penetration in the country. This Project will help establish large-scale solar parks and support the government’s plan to install 100 gigawatts (GW) of solar power out of a total renewable-energy target of 175 GW by 2022,” said Sameer Kumar Khare, Joint Secretary, Department of Economic Affairs, Ministry of Finance. “The use of this clean and green technology will also help contribute to global efforts to meet the challenges of climate change.” 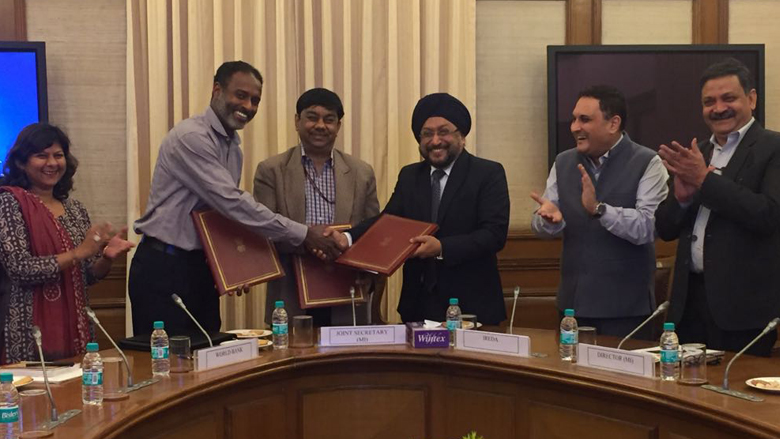 IREDA will utilize the funding under this project to develop the common infrastructure such as power pooling substations, intra-park transmission infrastructure and provide access to roads, water supply and drainage, among others. While some states intend to provide a full range of infrastructure services to the selected private or public sector developers, others plan to provide only pooling stations to facilitate internal evacuation. This, in turn, is expected to facilitate solar power investment by the selected developers in support of the Government of India’s efforts to increase the share of electricity that comes from renewable energy.

With about 331 GW of installed capacity, India’s power system is among the largest in the world. Yet per capita electricity consumption is less than one-third of the global average. An estimated 300 million people are not connected to the national electrical grid. With a rapidly growing economy the need for reliable power is only going to grow. This project will facilitate increase in electricity generated in solar parks and add to India’s clean power generation capacity.

“India’s goal of scaling up the provision of clean energy will require a vibrant market for solar investments,” said Hisham Abdo, Acting Country Director, World Bank India. “The challenge for this project is to go beyond investments; it is to deepen the solar market,” he added.

This project is one in a series of engagements requested by the Government of India from the World Bank in the solar power sector. The International Finance Corporation (IFC), a member of the World Bank Group, is actively supporting some of these selected solar parks in Madhya Pradesh and now in Odisha.

To achieve India’s solar energy targets by 2022, another focus area would be in building the capacity of IREDA and the project implementing agencies of those states where the solar parks are to be located. Support under the project will be provided in human resource and business planning, project monitoring, procurement and contract management, environmental and social safeguards and financial management, among others.

“Through this engagement, it is expected that the investments will boost market confidence, enable demonstration of economies of scale in large-scale grid-connected solar generation, contribute towards pushing down equipment and transaction costs, increase efficiency while reducing unit costs of solar power, and catalyze further support from other investor groups to help India achieve its ambitious target of installing 100 GW of solar power capacity by 2022,” said Surbhi Goyal, Senior Energy Specialist and World Bank’s Task Team Leader for the project.