Going Above And Beyond To End Poverty: New Ways Of Measuring Poverty Shed New Light On The Challenges Ahead

The fight to end extreme poverty is revealing a developing dichotomy. On the one hand, extreme poverty continues to be stubborn in certain parts of the world, while in others it has become minuscule or non-existent.

Recognizing this divergence, a new World Bank report—Poverty and Shared Prosperity 2018: Piecing Together the Poverty Puzzle—broadens our understanding of poverty. It introduces new tools and measures that will help countries better identify the poor and implement appropriate policies to build human capital and improve living standards.

In 1990, almost 36 percent of the global population lived on less than $1.90 a day, but by 2015 this number had dropped to a new low of 10 percent. Preliminary forecasts for 2018 show that global extreme poverty has further declined to 8.6 percent, besting the 9 percent interim target set for 2020 by two years.

Much of this decline is due to impressive growth in Asia, particularly China and India. As global poverty continues to fall, however, troubling signs are emerging as the pace of reduction is slowing. If this trend continues, it could threaten the goal of ending extreme poverty by 2030.

That’s because poverty is becoming more entrenched in certain pockets around the world, particularly in Sub-Saharan Africa and conflict-affected countries. In 2015, more extreme poor lived in that region than in the rest of the world combined. By 2030, forecasts predict that nearly 9 out of 10 extremely poor people will live in Sub-Saharan Africa and poverty there will remain in the double digits.

“As impressive as the poverty reduction story is, we can’t rest on the laurels of the past,” said Carolina Sánchez-Páramo, Senior Director, Poverty & Equity Global Practice of the World Bank. “The current forecast presents a very grim yet realistic picture of the probability of ending extreme poverty by 2030. That means, we need to renew our focus on Africa, and business as usual will not be enough to get us through to our goal. We need to invest in people and ensure growth is inclusive, with a stronger focus on raising the productive capacity of the poor.”

Higher standards for a growing world

These lines, which are typical of national poverty lines among lower- and upper-middle-income countries, respectively, are designed to complement, not replace, the $1.90 International Poverty Line. Data suggest that the rapid gains against extreme poverty have not been matched by reductions in the number of people living at these higher levels of income. In 2015, over a quarter of the world’s population survived on $3.20 per day and nearly half of the world still lived on less than $5.50 per day.

For example, Kalu Ram and Kherun Nisha live in Jaipur, India, where the median income is less than $3.20 a day. This husband-wife duo owns a shop where they sell a spicy deep-fried snack. Since opening the shop with help from a loan from an IFC client company, their income has doubled. Families at this income level have homes made of stone or brick with roofs commonly made from concrete, stone, or slate. Inside, homes have concrete or tiled floors, and they are likely to have electricity and a water tap. 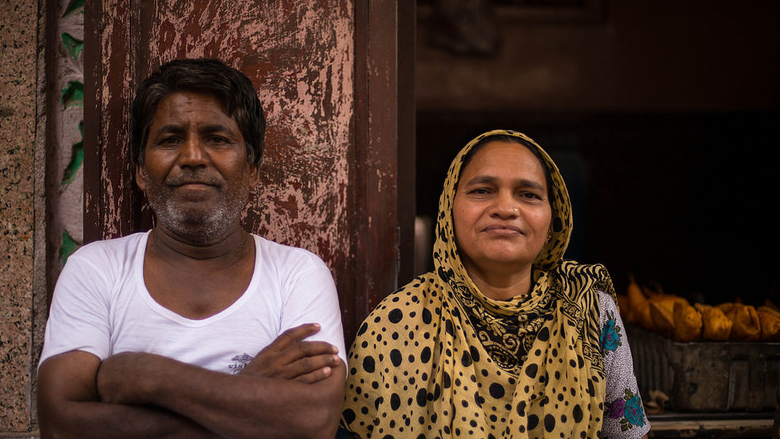 Similarly, as countries grow, their definitions of what constitute basic needs change. For instance,  To monitor this, the World Bank has introduced a Societal Poverty Line based on the typical level of consumption or income in each country. By this yardstick, in 2015, 2.1 billion people were poor relative to their societies, three times the number of people living in extreme poverty.

“The World Bank Group will continue to channel its efforts to lift people out of extreme poverty, and the $1.90 threshold will continue to be the benchmark in monitoring this progress,” said Haishan Fu, Director, Development Data Group of the World Bank. “But the success in reducing extreme poverty in different parts of the world has allowed us to broaden the focus to assess if people who move out of extreme poverty are achieving a basic level of well-being in their societies.”

Someone may not be poor based on monetary standards but can still feel the effects of poverty if they lack access to basic needs such as health care, clean water, and education.

The World Bank has come up with a multi-dimensional measure that looks at multiple deprivations, combining consumption or income with measures of education and access to basic infrastructure services, such as electricity, water, and sanitation. The new measure shows that poverty could be both more widespread and more entrenched than we thought. In a sample of 119 countries for the years around 2013, only one in eight are poor in monetary terms, but one out of five are also deprived in at least one other dimension, lacking education or sanitation facilities. 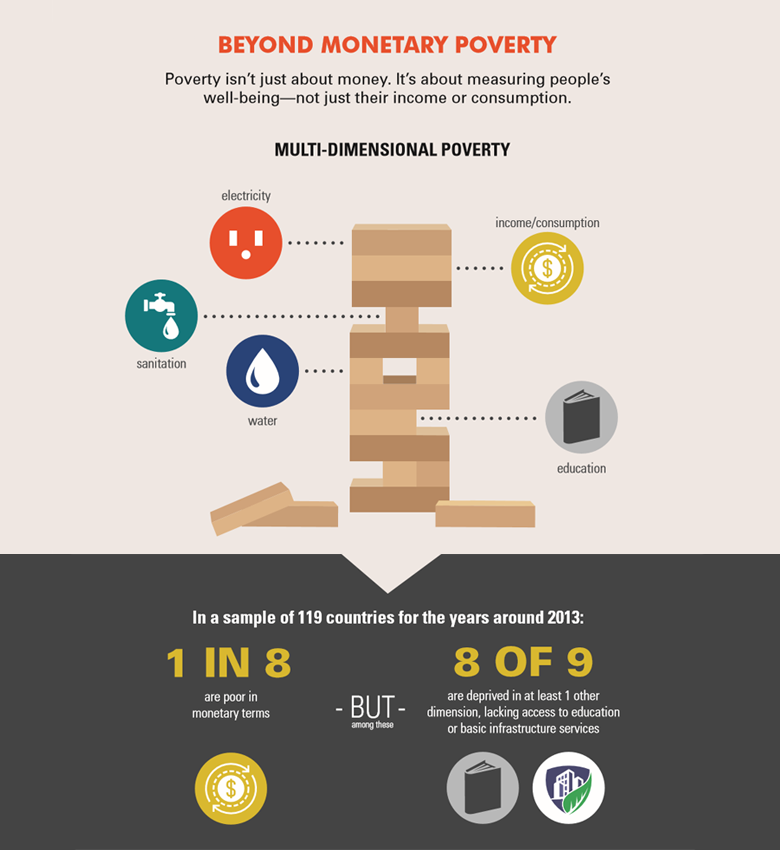 Poverty inside the household

Finally, people experience poverty differently even within the same household. Traditional measures haven’t been able to capture variations because the surveys stop at the household level. Measuring poverty as experienced by individuals requires considering how resources are shared among family members. However, more surveys are needed to capture consumption patterns of individuals so that governments can implement policies, particularly related to women’s labor force participation and early childhood development, to bridge the inequalities within households.

To end poverty in these countries, we need to broaden our scope, examine deprivation in multiple dimensions, and recognize the greater complexity inherent in the concept of poverty around the world.

“With this report, the World Bank is substantially broadening our institutional view of poverty, while keeping the core focus firmly on extreme monetary poverty under $1.90 a day,” said Francisco Ferreira, Senior Adviser, Development Research Group of the World Bank. “This combination of breadth and focus arises from a recognition that poverty is a complex, multifaceted, and socially embedded concept, and combines it with a resolve that the deepest forms of deprivation must be tackled first—particularly in Africa.”